Nic Claxton had 13 points and 14 rebounds as the Nets improved to 4-1 since Kyrie Irving was given a team-imposed suspension that will continue. Three of the four victories have come on the road.

The Nets have held five straight opponents below 100 points. 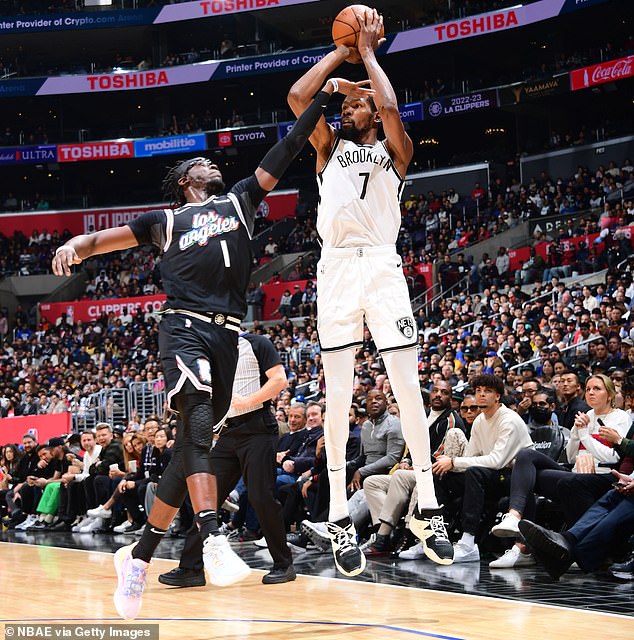 ‘We’re going to have to be one of those teams that any given night, somebody will have to step up and make huge plays for us,’ Durant said.

‘Obviously we’re missing (Irving), so we’re going to have to look for where those points are going to come from. I think the guys are doing it as a group.’

Paul George scored 17 points for the Clippers but endured a rough shooting game, going 5 of 21 from the field (23.8 percent). Ivica Zubac added 16 points and 15 rebounds for the Clippers, who lost for just the second time since October 31.

Strus scored 31 points, one off his career high, and the Heat spoiled LaMelo Ball’s return to the Charlotte lineup by beating the Hornets 132-115. 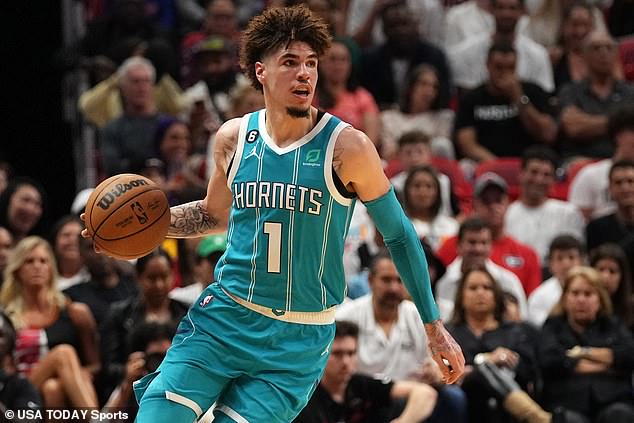 Strus was 10 of 16 from the floor, 8 of 14 from 3-point range. It was only the second time this season that Miami won a game by more than seven points, and ended a streak of six consecutive single-digit games for the Heat.

Miami also made 12 consecutive shots in one stretch from late in the first half through the midpoint of the third quarter, turning a five-point deficit into a 16-point lead.

Adebayo had 24 points and 15 rebounds for the Heat, who swept a two-game home series with the Hornets and got consecutive wins for only the second time this season. Charlotte lost its eighth straight, extending the longest current slide in the NBA.

Elsewhere, Jayson Tatum scored 28 of his season-high 43 points in the first half as the Boston Celtics beat the Detroit Pistons 117-108 for their sixth straight win. 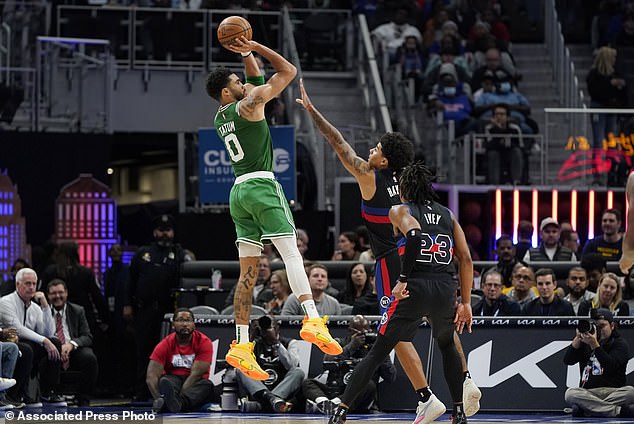 Tatum also had 10 rebounds, and Marcus Smart added 18 points and 10 assists in Boston’s second win against Detroit in four days. The Celtics won 128-112 at home on Wednesday.

Bojan Bogdanovic scored 28 points to lead Detroit, and rookie Jalen Ivey added a season-high 26. Marcus Bagley III made his season debut after missing the first 13 games with a sprained knee and finished with four points and four rebounds in 17 minutes.

Both teams were missing one of their most important players. The Pistons’ Cade Cunningham will be out for at least a week with shin soreness, while the Celtics’ Jaylen Brown got the night off to deal with a knee contusion. 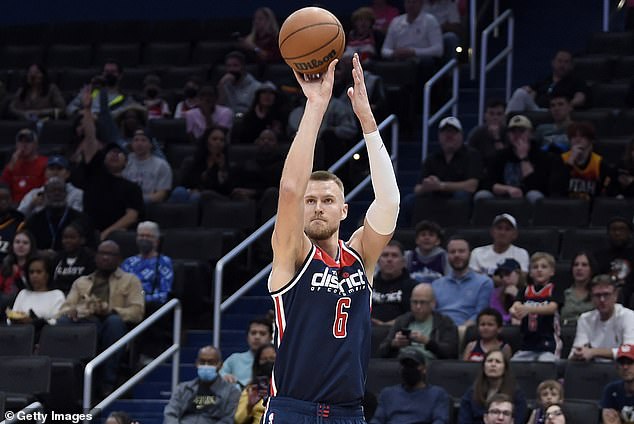 Kristaps Porzingis had 31 points and 10 rebounds, Kyle Kuzma added 23 points, eight rebounds and six assists as the Washington Wizards beat the Utah Jazz 121-112 on for their season-high third straight victory.

Corey Kispert hit all six of his field goals, four of them 3-pointers, and scored 18 points. The Wizards played their fourth consecutive game without leading scorer Bradley Beal, who had been in the NBA’s health and safety protocols.

‘I think we were better at making that extra pass, that extra play for the teammate,’ Porzingis said. ‘It’s starting to click a little bit.’

Jordan Clarkson had 18 points for Utah (10-4), which had a four-game winning streak broken. Collin Sexton and Lauri Markkanen each had 17.

The Indiana Pacers used a dominant fourth quarter to beat the Toronto Raptors 118-104 with Buddy Hield scoring 22 points and Myles Turner having 19 points and 10 rebounds. 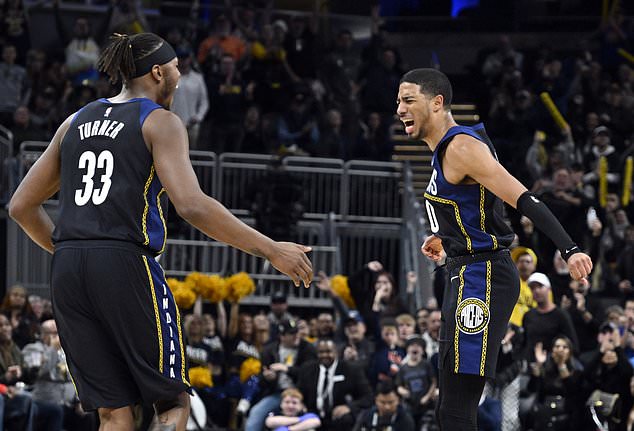 Tyrese Haliburton shook off a 3-for-14 shooting night with 15 assists for the Pacers, who outscored the Raptors 36-14 in the final 12 minutes.

Jalen Smith finished with 16 points and rookie Bennedict Mathurin had 15 for Indiana.

O.G. Anunoby scored 26 points for the short-handed Raptors, who led 90-82 after three quarters before the Pacers blew by them as Toronto matched its lowest-scoring quarter of the season.

Missing the injured Pascal Siakam and the ill Fred VanVleet, Toronto shot 6 for 21 in the final period, missing eight of nine 3-point attempts.

Joel Embiid had a season-high 42 points and 10 rebounds as the Philadelphia 76ers turned a blistering shooting performance in the first half into a 121-109 win over the Atlanta Hawks.

Tyrese Maxey scored 26 points and Tobias Harris added 21 for the Sixers (6-7), who have won split the three back-to-back contests they’ve played this season. Philadelphia lost in Atlanta 104-95 on Thursday night. 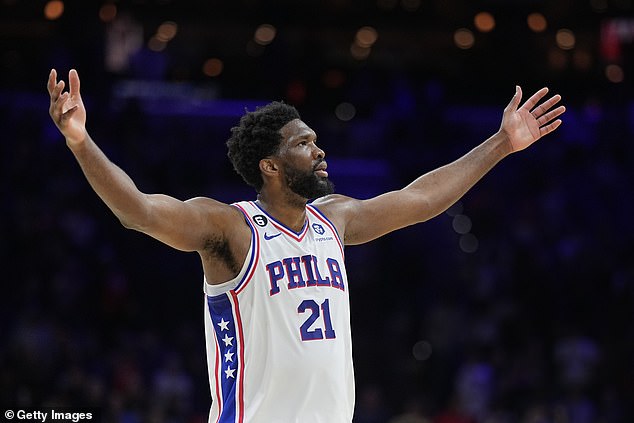 Trae Young scored 27 points and Dejounte Murray added 21 for the Hawks, who had a 43-31 rebounding advantage – including a 12-2 advantage on the offensive glass – but struggled by shooting just 24.3 percent from beyond the 3-point arc.

Embiid and the Sixers went right at Hawks center Clint Capela by posting him just outside the paint, allowing the option for a turnaround jumper or a skip pass to a wide open Harris or Maxey when Atlanta came over in coverage.

Embiid scored Philadelphia first 10 points of the game and then became a distributor as the Sixers raced out to a big lead in the first half by shooting 58.1% from the floor.

Embiid has scored 40 or more points 28 times in his career.

Zion Williamson scored 26 points and Brandon Ingram iced the game with six points in a 13-0 run in the final 2:07 to power the New Orleans Pelicans to a 119-106 victory over the Houston Rockets on Saturday night.

The Pelicans led by as many as 18 points in the third quarter only to fall behind by eight early in the fourth quarter. Kevin Porter Jr. tied the game at 106 with 2:58 left, but New Orleans scored the game´s final 13 points. 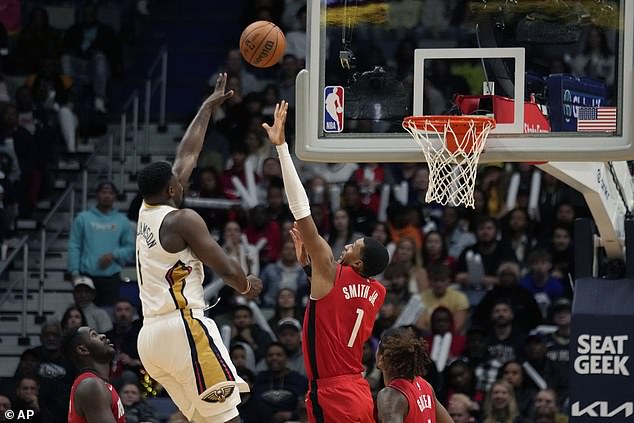 Zion Williamson shoots over Houston Rockets forward Jabari Smith Jr. (No. 1) in the second half

Jose Alvarado came off the bench to spark the Pelicans’ rally with 12 points, five assists and three steals, and Larry Nance Jr. added 22. Ingram finished with 20.

Houston was paced by Jalen Green with 33 points and Porter with 23 points.

The Rockets trailed 78-60 after Herb Jones made a layup with 7:24 left in the third quarter, but they closed the period on a 27-6 run before a final layup by Nance to take an 87-86 lead into the final quarter. Green was the catalyst with 13 points in the run, including three 3-pointers.

Williamson went 4-of-4 from the field in a 13-point first half and dished out four assists as the Pelicans built an 18-point, second-quarter lead and coasted to a 63-50 halftime edge. Larry Nance Jr. came off the bench to score 12 points in 12 minutes, including 3-pointers from the left and right corners. Ingram added 11 points in the half. 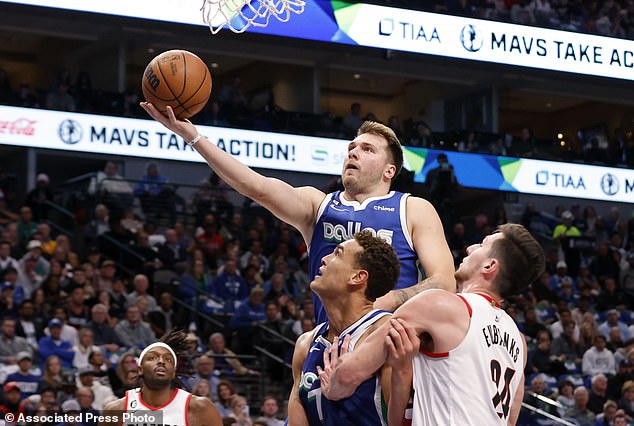 Finally, Luka Doncic had 42 points, 13 rebounds and 10 assists for his third triple-double of the season as the Dallas Mavericks beat the Portland Trail Blazers 117-112.

Doncic scored 30 or more points for the 10th time in 12 games after being held in the 20s in Dallas’ previous two games, losses at Orlando and Washington.

The Blazers played their third consecutive game without Jusuf Nurkic, seventh in the NBA in rebounding, who was sidelined by a right hip adductor.