The Los Angeles Lakers lost a nail biter against the Sacramento Kings that looked like it could have gone either way until the final minutes.

The Lakers were without Lebron James who sat out the game after injuring his abductor on Wednesday night against the Clippers.

Anthony Davis led the way for the Lakers with 24 points and 14 rebounds, while Russell Westbrook recorded 21 points and 11 assist off the bench.

Neither of these efforts were enough to overcome a Sacramento side lead by De’Aaron Fox’s 32 points, 12 assist, and seven rebounds.

It remains unclear if James will be available when the Lakers face the Brooklyn Nets on Sunday night. 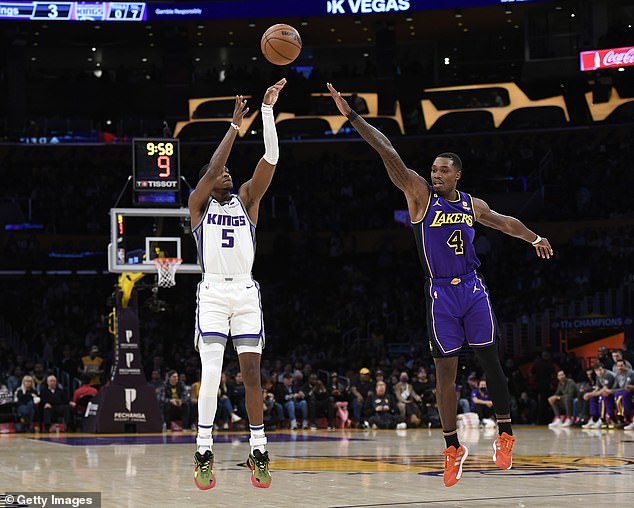 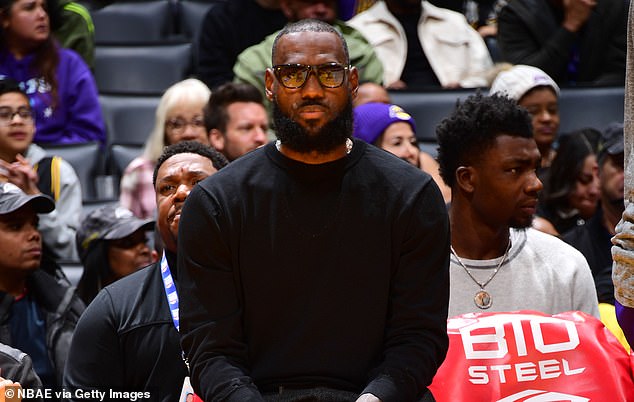 Julius Randle chipped in 21 points for the Knicks, who have won two of their last three games.

Bojan Bogdanovic scored 25 and Alec Burks had 17 for Detroit, who have now lost five of their last six games.

The Pistons are now 0-7 on the road this season. 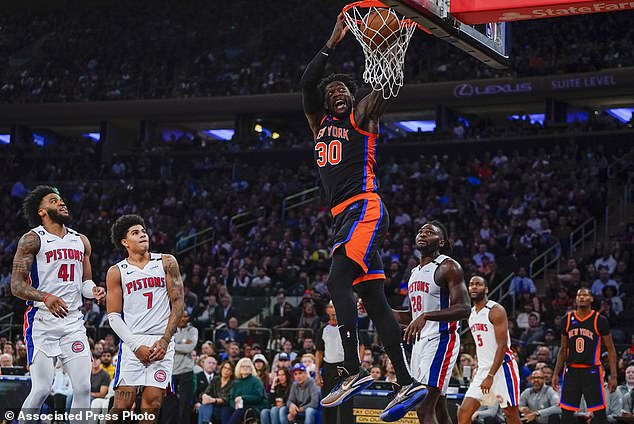 The Celtics relied on their offense to keep the reigning back-to-back MVP from getting his revenge. Jayson Tatum had 34 points, eight rebounds and five assists and Boston extended its season-best win streak to five games by beating Denver 131-112 on Friday night.

It was Tatum´s third straight game with at least 30 points and seventh time with 30-plus this season. Boston had just seven turnovers and shot 57 percent from the field with 16 3-pointers. Jaylen Brown had 25 points, eight rebounds and eight assists.

‘It’s just a lot of fun right now on the offensive end,’ said Al Horford, who had six 3-pointers and finished 21 points and seven rebounds. ‘Guys are really conscious of understanding of what coach wants and what he expects. He wants good spacing and we’re doing a good job of getting to those positions.’ 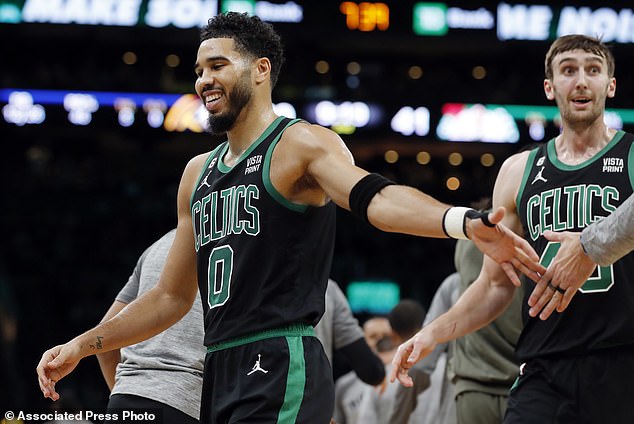 Boston Celtics’ Jayson Tatum (0) reacts after making a three-pointer during the first half of an NBA basketball game against the Denver Nuggets, Friday, Nov. 11, 2022, in Boston. (AP Photo/Michael Dwyer) 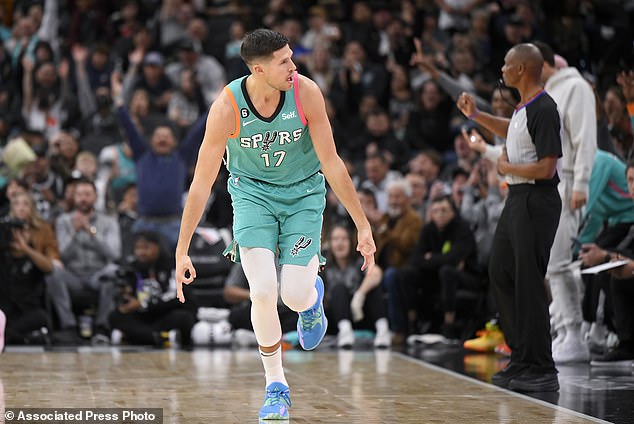 Wendell Carter Jr. had 20 points and 10 rebounds, and the Orlando Magic beat the Phoenix Suns 114-97 on Friday night.

Terrence Ross scored 12 of his 14 points in the fourth quarter as Orlando earned a second straight win for the first time this season.

‘We´ve been locked in and dialed in,’ Ross said. ‘Even with all the injuries we´ve had, we´ve been playing together. It’s a next-man-up mentality.’

Cameron Payne scored 22 points for the Suns, who played a second straight game without injured guard Chris Paul. Devin Booker had 17 points on 6-of-19 shooting. 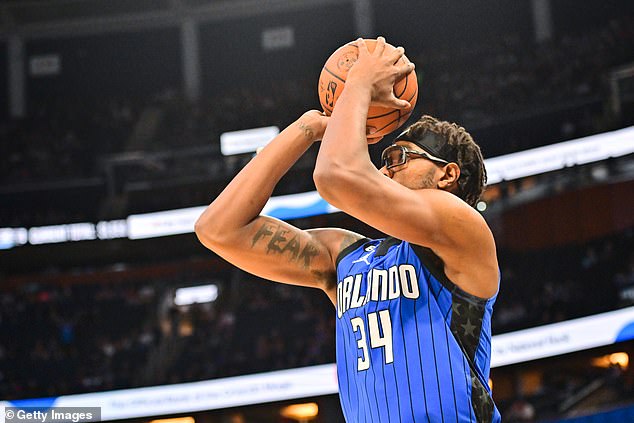 Wendell Carter Jr.  of the Orlando Magic shoots a three-pointer in the first half of a game against the Phoenix Suns at Amway Center

Omoruyi, a two-way player in his second year, made 8 of 10 field goals in a reserve role.

Pascal Siakam, Toronto’s top scorer, sat out with a right adductor strain. Chris Boucher led the Raptors with 20 points and 12 rebounds in a reserve role and Scottie Barnes and Fred Van Vleet each added 15 points. 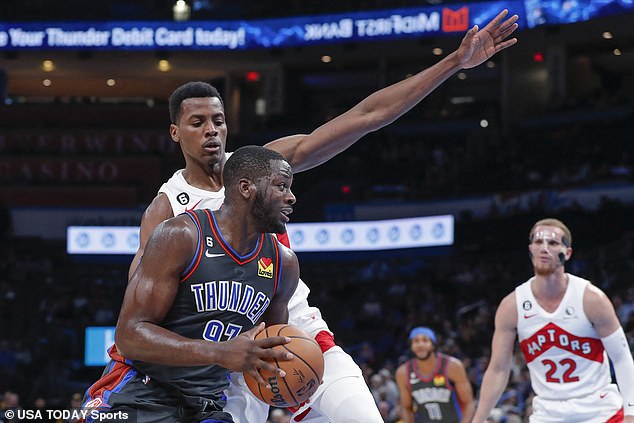 Eugene Omoruyi drives to the basket against Toronto Raptors forward Christian Koloko (35) during the second half at Paycom Center.

Ja Morant had 28 points, nine rebounds and eight assists to lead the Memphis Grizzlies to a 114-103 victory over the Minnesota Timberwolves on Friday night.

Desmond Bane finished with 24 points and five assists for Memphis, while Dillon Brooks scored 21. Brandon Clarke added 15 points, making all six of his shots as the Grizzlies won their fifth in the last six.

The game was the first between the two teams since last postseason’s spirited first-round playoff series won by the Grizzlies in six games.

The Timberwolves have added Gobert to the frontline with Towns. The duo and Minnesota have struggled lately, losing six of seven. 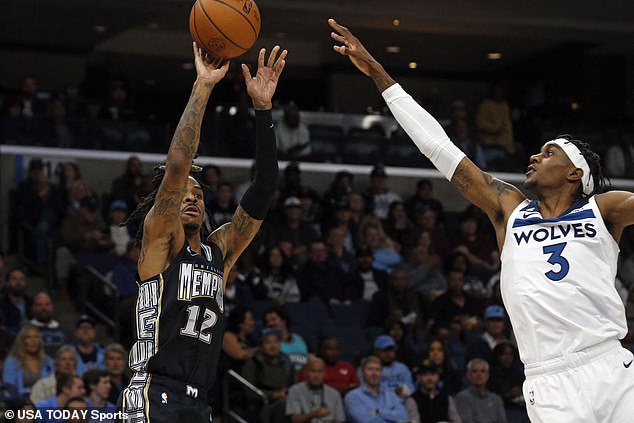 Ja Morant (12) shoots for three as Minnesota Timberwolves forward Jaden McDaniels (3) defends during the first half at FedExForum.

Stephen Curry hit a tying 3-pointer with 1:18 to play, a go-ahead layup moments later off a perfect, long pass by Kevon Looney, then one more dagger 3 on the way to 40 points, rallying the Golden State Warriors past the Cleveland Cavaliers 106-101 on Friday night.

Donovan Mitchell had 29 points, 10 rebounds and nine assists for Cleveland, but went down hard grabbing at his right ankle in the waning moments. He got up and hit a pair of free throws with 12.4 seconds left.

Curry extended his NBA record to 200 straight regular-season games with at least one 3-pointer and shot 6 of 11 from deep.