Fans of the USMNT have been debating whether to include Ricardo Pepi or Jordan Pefok as the final striker for the team going to Qatar.

On Wednesday, they got their answer: Neither of them.

USMNT coach Gregg Berhalter today made some selection shocks, as US Soccer announced the 26 players called up to represent the United States at the FIFA World Cup this month. 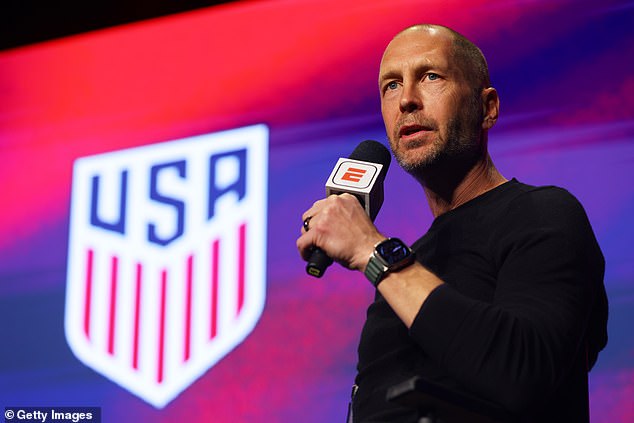 ‘I don’t think there’s so many surprises, is there? What do we think? Joe, are there a lot of surprises?,’ Berhalter asked the room – turning to one reporter who indicated there were a few.

‘Really?’, Berhalter said with a shrug.

On a night where names of some of the best players in the United States had their fate publicly revealed in front of a muted crowd at a live music venue in Brooklyn, there were some moments that drew surprised reactions from the crowd.

At each of the four positions, Americans have surprises joining the flight and/or left behind – and we’re going to break it down and see how these decisions will impact the USMNT’s chances. 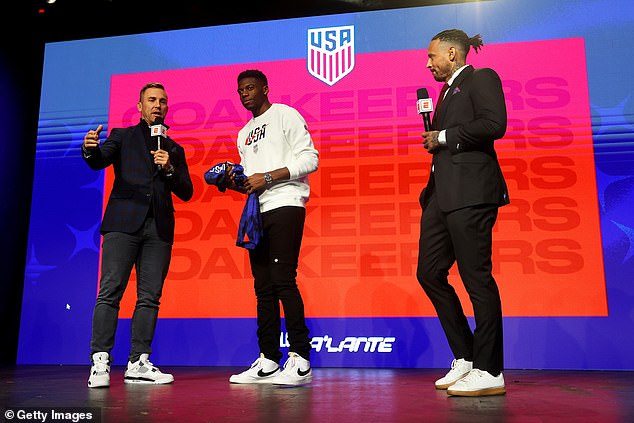 At the nationally televised event, select players – like Sean Johnson (center) made appearances

Like the introduction alluded, Jordan Pefok and Ricardo Pepi have occupied favored roles within this squad at different times. Instead of picking one over the other, the coaching staff took a third unexplored option and left both of them at home.

‘When we were looking at this as coaches, we were evaluating Haji versus Jordan Pefok and that’s what it came down to and in this particular case we felt like Haji is in great goal scoring form.’

Berhalter backed up his pick by comparing his goal scoring out put to Belgian striker Michy Batshuayi.

‘The starting striker for Belgium (Batshuayi) also plays in the Turkish league and has five goals. And Haji has nine.’ 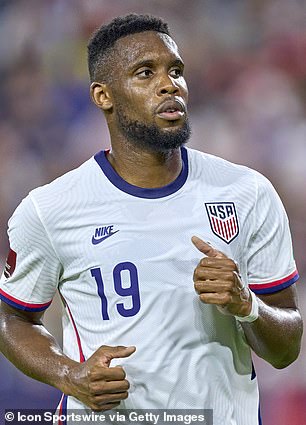 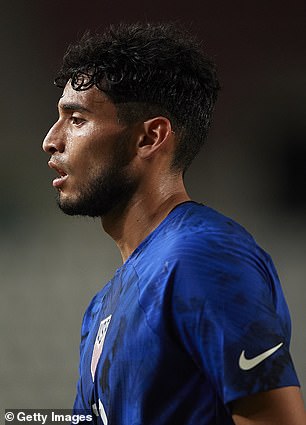 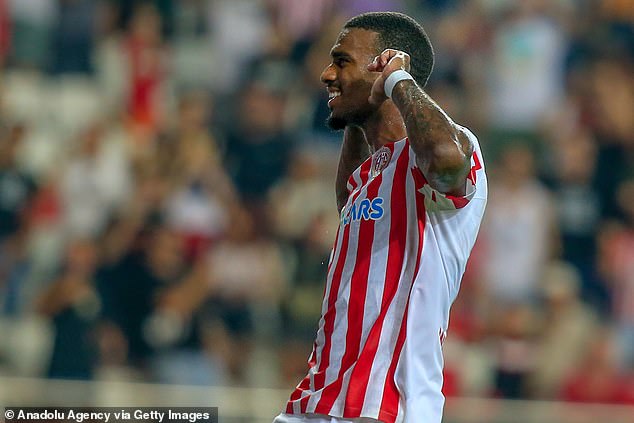 Instead, Antalyaspor striker Haji Wright will board the plane – as he sits 2nd in the Turkish goal scoring table with nine goals in twelve matches for the team

From a pure production standpoint, all signs would point to Wright for being the correct choice. Pefok does have three goals and three assists in the Bundesliga, but he hasn’t scored since mid-September. Similarly, Pepi didn’t find goals until after a move away from the Bundesliga to Groningen in the slightly less competitive Eredivisie.

Meanwhile, Wright has more goals with Antalyaspor than Pepi and Pefok combined so far this season.

In Berhalter’s system, there’s only one striker and the position doesn’t seem to have been removed from Jesus Ferreira’s hands – even though the FC Dallas striker hopes his former teammate Pepi joined him.

‘At the end of the day, it’s coaches decision, but obviously he’s a guy I would’ve liked to share this moment with… hopefully he’ll be in the next one,’ Ferreira said after the announcement.

The key man in attack, of course, is Christian Pulisic. It hasn’t been the easiest season so far at Chelsea, with new coach Graham Potter using him as a wing-back. But under Berhalter, Pulisic knows he is the main man. Leaving his troubles in London for a while might be just what he needs.

A word, too, for young attackers Gio Reyna and Tyler Adams. Pulisic can’t do it all by himself. Borussia Dortmund attacker Reyna is just 19 but has all the attributes to make a name for himself in Qatar. He’s cool in front of goal, likes the ball to feet and has an eye for a smart pass as well. 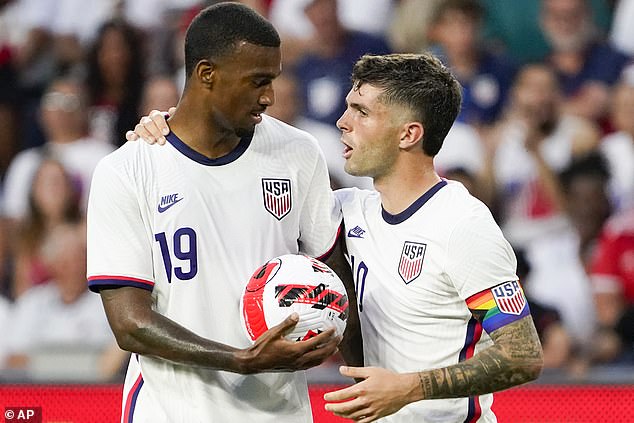 This’ll be a quick point for the inclusion. Brenden Aaronson was always going to be a part of this team, but he’s normally deployed as a winger in Berhalter’s system and at Leeds United under Jesse Marsch.

So when he was announced with the midfield group, it raised eyebrows and attention – as well as questions whether he’d be deployed as a forward or a midfielder.

‘He can do both,’ Berhalter answered, ‘Midfield… is light for us compared to the forward position, so we can see using him there as well.’ 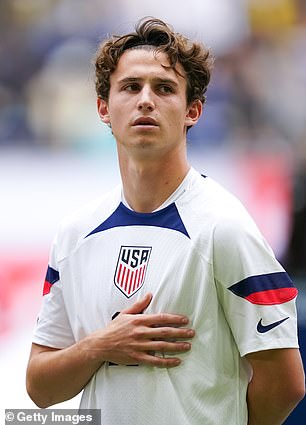 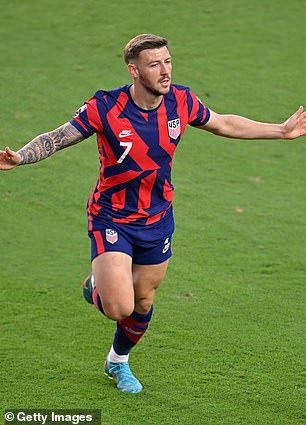 Meanwhile, a mainstay of the team will not be joining the squad.

FC Dallas winger Paul Arriola was named in a US squad in eleven of the 12 matches the team played this year. He played in six of them. He also hasn’t missed a callup for a series of competitive fixtures since September of 2021. And yet, he was not named to this team.

Answering this reporter’s question about the decision, Berhalter said it was a matter of people getting other wingers back healthy.

After the announcement was made, Paul Arriola took to Twitter to express his frustrations

‘And it just made that Paul was the odd man out. And it sucks, you know, it’s the worst thing to have to tell him that. You know, we feel that there’s other players – those other wingers that are ahead of him.

‘And now everyone’s back. And, you know, that’s the worst possible thing, man: when this guy’s been with us since day one and you gotta tell him that he’s not coming to the World Cup.’

Juventus midfielder Weston McKennie, like Pulisic, will be central to Berhalter’s setup. After a thigh problem,  the 24-year-old returned to first-team training in Italy this week – just in time, as far as Berhalter is concerned.

Already with 37 caps to his name and plying his trade at a European heavyweight, the No 8’s energy, work rate and tough tackling – he puts in the hard yards – will be key to laying the foundations for success further up the field.

Don’t read ‘surprise’ as ‘undeserving’ here, as Ream has been busy honing his craft in the EFL Championship and is now reaping the rewards in the Premier League.

The surprise stems mostly from how little Ream has been used under Berhalter. The Fulham captain last appeared for the United States in a 0-0 draw against El Salvador in September of 2021 and would make his first appearance of 2022 at the World Cup.

While it would be heartwarming to believe the 35 year-old made it in on his own merit, it’s highly likely that serious injuries to center backs like Miles Robinson and Chris Richards led Berhalter to give Ream a roster spot.

As players like Cameron Carter-Vickers and fellow surprise Shaq Moore put pressure on starting center backs, Ream could be turned to for his experience and veteran presence – something severely lacking on this young team. 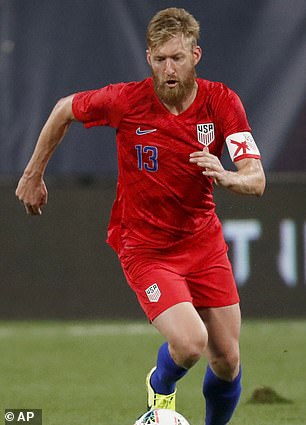 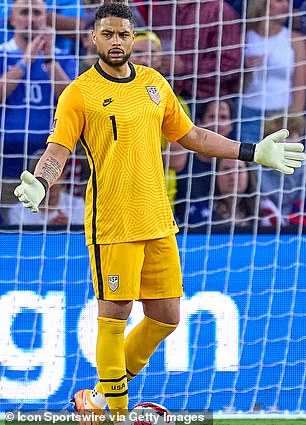 Veteran Tim Ream (L) will be the oldest member of the team while Zack Steffen couldn’t crack the final roster after years of being the presumed no. 1 goalkeeper for the United States

That brings us to what may have been the biggest surprise of the night.

Since showing out against France in a friendly before the 2018 World Cup, Zack Steffen seemed to be set out on a path to claim the no. 1 goalkeeper spot for the USMNT at this World Cup.

But after a move from the Columbus Crew – a team Berhalter used to coach – to Manchester City resulted in a lot less playing time, Steffen didn’t get the reps and exposure required to keep his form.

Loan moves to Fortuna Dusseldorf and Middlesbrough haven’t been as productive as he’d hoped and the rise of Matt Turner in New England and later at Arsenal meant Steffen would lose the no. 1 spot.

What wasn’t predicted was that Steffen would be dropped from the squad entirely. Luton Town’s Ethan Horvath may have better stats and New York City FC keeper Sean Johnson has put up some great seasons in MLS. 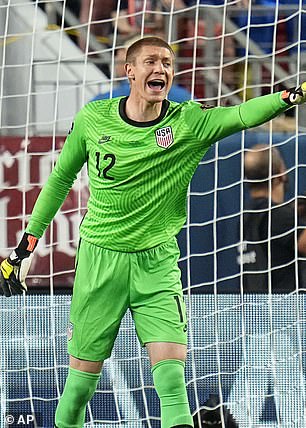 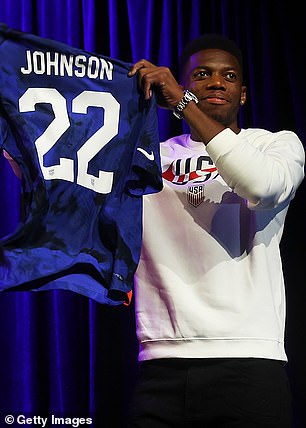 But for Steffen to go from safe in the team earlier this year to the outside looking in is shocking.

Berhalter didn’t really provide much clarity for the matter, saying the team was ‘comfortable’ with the trio they chose.

‘Me and Zach go way back, and Zach’s been there for me a bunch of times,’ Berhalter said during Wednesday’s news conference after the squad announcement. ‘And to tell him he is not going to be part of the World Cup team was heartbreaking for me.

‘But those are decisions that we made as a staff and we move forward and now it’s about, “Well, who do we have in camp and how are we going to be successful?” ‘