There is a growing belief among those close to the situation that Manchester City will be Jude Bellingham’s next destination, Sportsmail understands.

After a series of strong performances this season, notably in the Champions League against City themselves, the rumour mill has been in full swing surrounding which club might be able to take him off Borussia Dortmund‘s hands.

Real Madrid had for a time appeared closest but City have snuck in while the likes of Liverpool still harbour hopes of signing the 19-year-old.

Sportsmail looks at how the English champions might look to set up next season with Bellingham in the side. 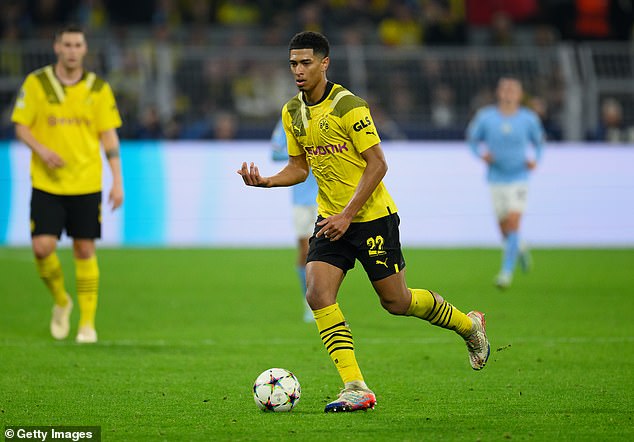 With City having consistently had one of the tightest defences in the league since Guardiola arrived in 2016, much is unlikely to change in City’s first choice back four next season.

Ederson will certainly be in goal for the 2023/24 season while full-backs, injury permitting, Kyle Walker and Joao Cancelo, two of the club’s most consistent performers over the past few years, will remain.

There has been slightly more turbulence at the centre of Guardiola’s back four in recent times. John Stones and Ruben Dias was the settled partnership for a time with Ayermic Laporte out of the side. 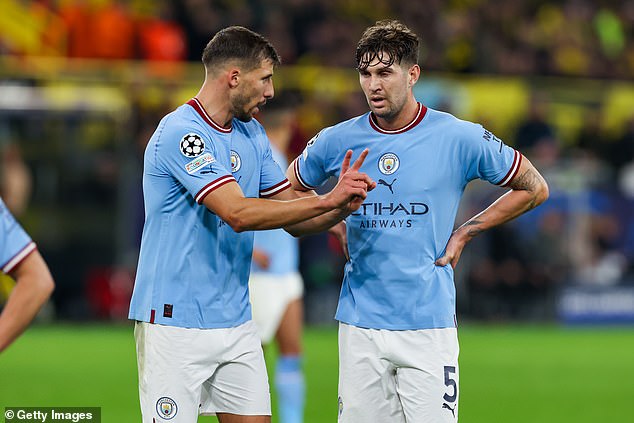 However, last season Stones struggled for a while for form. Meanwhile, Manuel Akanji was brought in this summer as Guardiola looked to bolster his options.

Akanji starting next to Nathan Ake, another player who struggled to get a look in last season, for the derby against Manchester United earlier this season was indicative of a centre-back pairing that Guardiola has never been quite settled on.

However, Stones and Dias – with eight and 12 appearances this season respectively, the most of their five centre-backs – remain the Catalan’s first choice.

It speaks to the quality of Bellingham that Guardiola deems him the player to refresh City’s midfield.

Since Rodri, signed in the summer of 2019 from Atletico Madrid, City have only signed one first team midfield player – Kalvin Phillips who has played a total of 14 minutes this term.

Kevin De Bruyne, to the chagrin of City supporters, is 31 and is not getting any younger despite his seemingly increasingly spectacular performances. 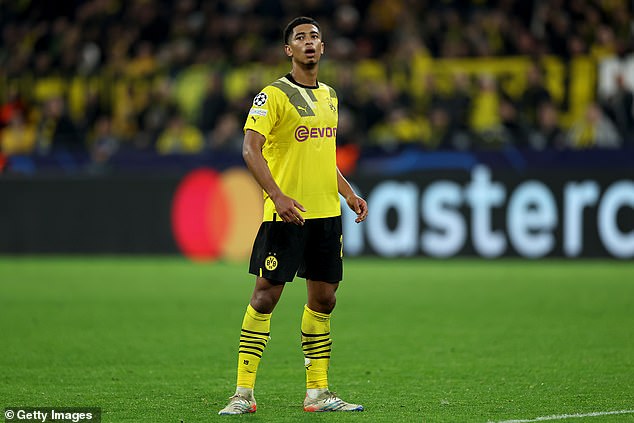 With Bernardo Silva’s future the source of constant speculation – Barcelona are believed to be desperate to sign the player – it seems likely they will sign a midfielder for the traditional ‘8’ role this summer. Bellingham is perhaps the most attractive prospect on the market this forthcoming summer.

Having performed incredibly well against City in the Champions League twice this season, to follow on from his impressive performances against them two years ago in the same competition, Guardiola is very aware of his talents.

‘This guy was something special in terms of his mentality. Now he is 19 and he is already one of the captains. The quality, everybody knows it. The whole package is really good,’ Guardiola said of the teenager in October. 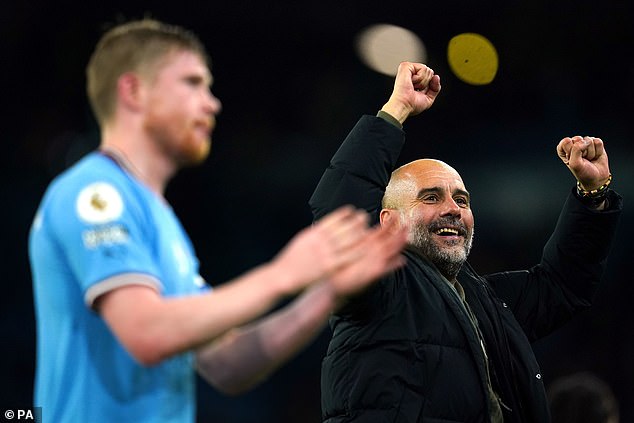 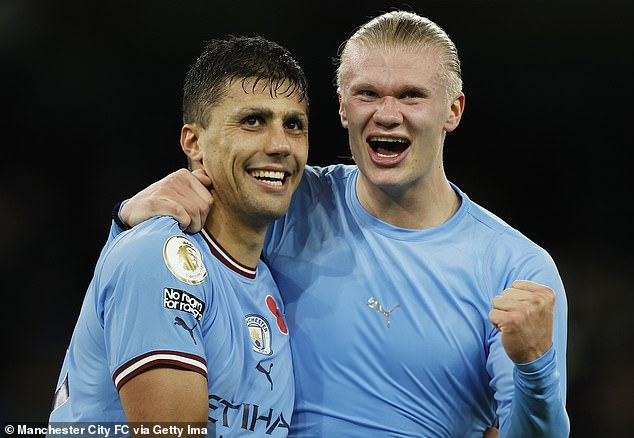 It is likely Bellingham would play on the left of a midfield three were he to join, with Rodri deployed at the base and De Bruyne in his customary role in the right inside channel.

It is possible Ilkay Gundogan, another stalwart of recent years for Guardiola, departs to make space for Bellingham to come in.

Perhaps never has a club side ever enjoyed such riches and an array of attacking truly world class attacking talent.

Following the signing of Haaland this summer, despite losing Raheem Sterling and Gabriel Jesus to Chelsea and Arsenal respectively, City’s forward line looked complete. Guardiola said on Tuesday that they will not be looking to add any extra bodies this January despite record-breaking financial results being released on Monday, that could potentially be the case for this area of the field next summer, too.

Haaland is a shoo-in for the central position. His 18 goals in the Premier League alone so far have him well on track for smashing the Premier League single goalscoring record. His arrival has transformed the way City play, with Guardiola having approached much of the past two seasons without a recognised centre forward. 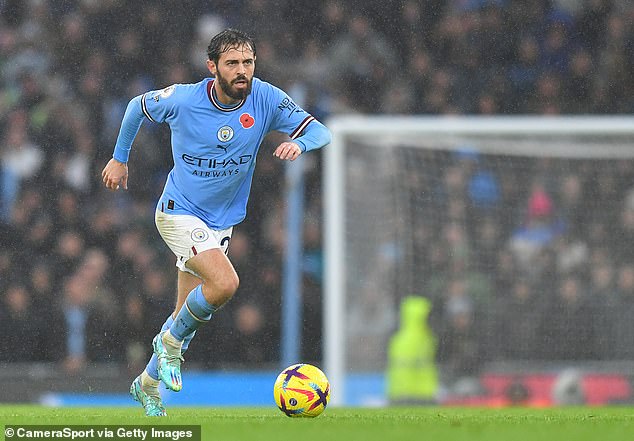 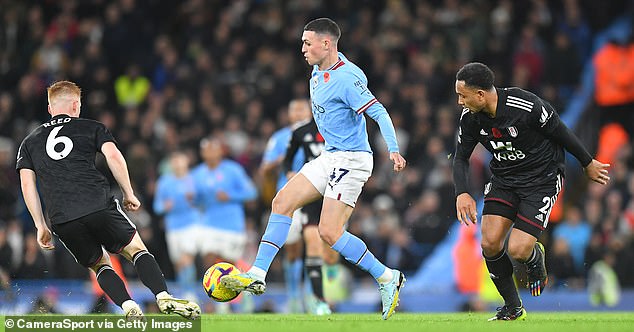 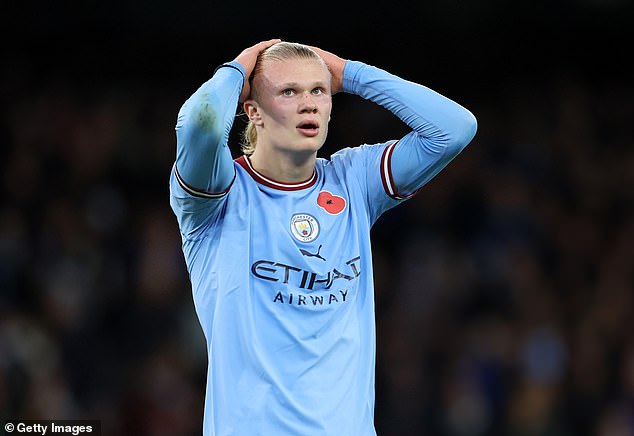 Throw in Julian Alvarez, one of the most highly rated prospects in world football at present, and Guardiola’s options are plentiful.

The most likely three up front appears to be Bernardo off the right, with Haaland through the middle and Foden on the left. 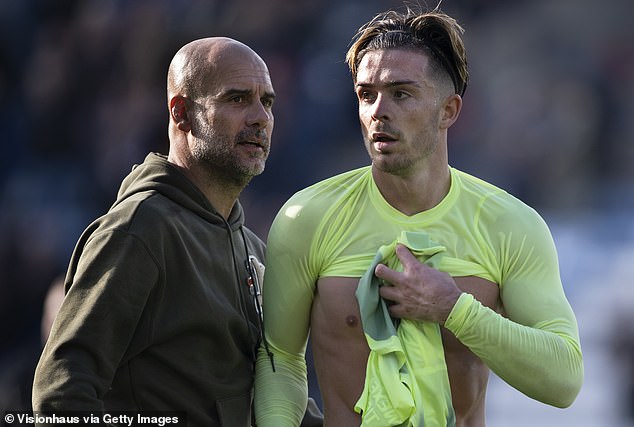