By Will Pickworth and Riath Al-Samarrai for MailOnline

Ralph Hasenhuttl has been sacked as Southampton manager following their 4-1 defeat to Newcastle on Sunday.

The Saints are languishing in the relegation zone in 18th place having won just once in their last nine games – and just three times all season.

Hasenhuttl has been in charge of the club since December 2018 when he succeeded Mark Hughes.

Luton boss Nathan Jones has emerged as the early front-runner for the job, according to bookmakers, with the 49-year-old 1/5 with Bet Victor. 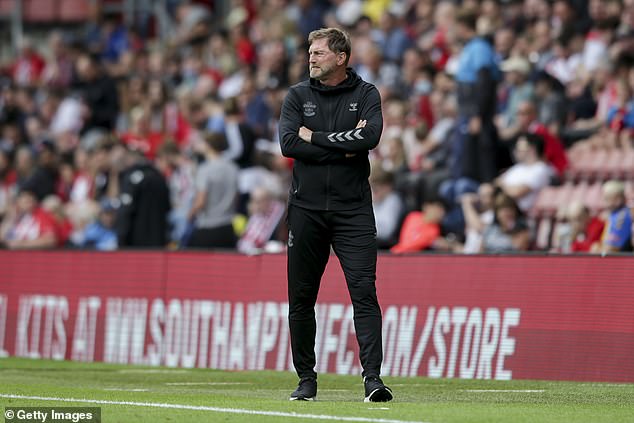 Ralph Hassenhuttl has been sacked as Southampton manager after a poor start to the season. 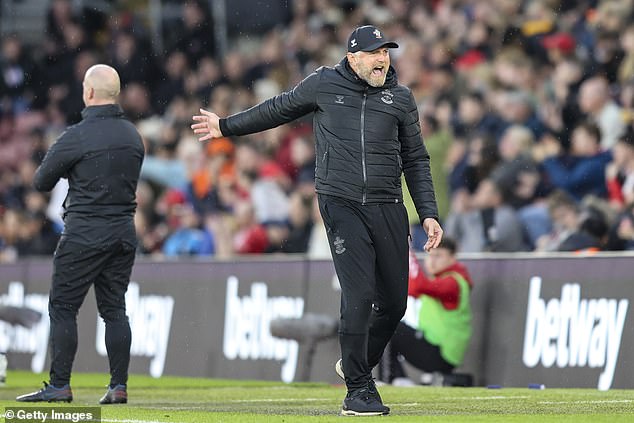 In a statement, the club said: ‘Hasenhüttl, who was appointed in December 2018, departs having made a significant contribution to the club, overseeing some memorable results and also playing a key role in the development of our club infrastructure, identity and playing squad. However, we now believe it is an appropriate time to make a change.

‘Everyone involved with the club would like to express their sincere thanks to Ralph for all of his efforts, as well as the unwavering commitment he has shown throughout his time as manager.

‘First Team Lead Coach Rubén Sellés will take charge of the side on an interim basis for our game on Wednesday night. The club will be announcing a permanent replacement in due course.’

Sportsmail had reported on Sunday that following the defeat to Newcaslte, Hasenhuttl’s time at the club was on the brink of ending.

His position at the club was hanging by the flimsiest of threads in the wake of an eighth defeat in 14 Premier League games, which left his side in the bottom three.

The Saints hierarchy were stuck with the dilemma of whether to formally drop the axe before or during the World Cup, but they decided to make the decision on Monday morning.

By Sunday night, Hasenhuttl appeared almost resigned to his fate following the defeat to Eddie Howe’s high-flying side. Asked directly if he feared the sack, he said: ‘I have taken a lot of decisions since I’m here but I don’t have to take this one.’

More tellingly, when the 55-year-old was pressed on whether he could see a way out of the slump, he added: ‘No…. Not at the moment.’ 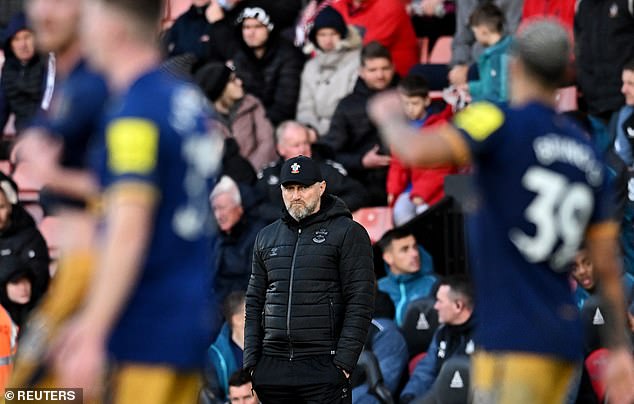 At the time of Hasenhuttl’s arrival in 2018, Southampton were lying in 18th place, before Hasenhuttl guided them to safety that season.

Over the three subsequent campaigns, Southampton have finished 11th, 15th and 15th, but they have been on a dismal run of form over recent months.

Since March earlier this year, he has picked up just 17 points from 26 games, with the south coast outfit conceding a whopping 54 goals during that period.

Southampton have just two games before the World Cup break – a Carabao Cup tie with Sheffield Wednesday in midweek and a trip to Anfield to face Liverpool next Saturday.

The club’s hierarchy are faced with the decision of whether to make an appointment before the break for the tournament in Qatar – or whether to wait a little longer.

Luton boss Jones is the early favourite with the bookmaker, with the Welsh manager highly-rated after his impressive body of work at Kenilworth Road.

After guiding them to promotion from League Two, he had the Hatters in second place in League One before he was poached by Stoke City in January 2019.

However, he enjoyed a miserable spell with the Potters, lasting just 10 months at the club and winning just seven of his 38 games in charge.

Jones  returned to Luton as manager in May 2020, leading them to safety before establishing them as a Championship outfit as they remarkably reached the play-offs last season – before they lost 2-1 on aggregate to Huddersfield Town in the semi-finals.

The Welshman was named as the EFL’s Championship Manager of the Season for 2021-22.