For now and forever, Dusty Baker, the epic storyteller, first-class namedropper, toothpick chewer and baseball lifer will bear a most distinguished title.

The man who can weave a tale like few others, wistfully recalling his time under Hank Aaron’s tutelage or chance encounters with Jimi Hendrix, John F. Kennedy Jr. and countless more, completed the only missing chapter in his own story Saturday night.

After 25 seasons as a big league skipper peppered with a couple of painful near-misses, the 73-year-old Baker finally made it all the way home when his Houston Astros beat the Philadelphia Phillies 4-1 to win the title.

‘Had this happened years ago, I might not even be here,’ Baker said. ‘So maybe it wasn’t supposed to happen so that I could hopefully influence a few young men’s lives and their families and a number of people in the country through showing what perseverance and character can do for you in the long run.’

Watch Dusty Baker. He knows they are about to win. And you can see him look down and take a deep breath. He finally gets his ring. pic.twitter.com/y7iOgZ2Ixk 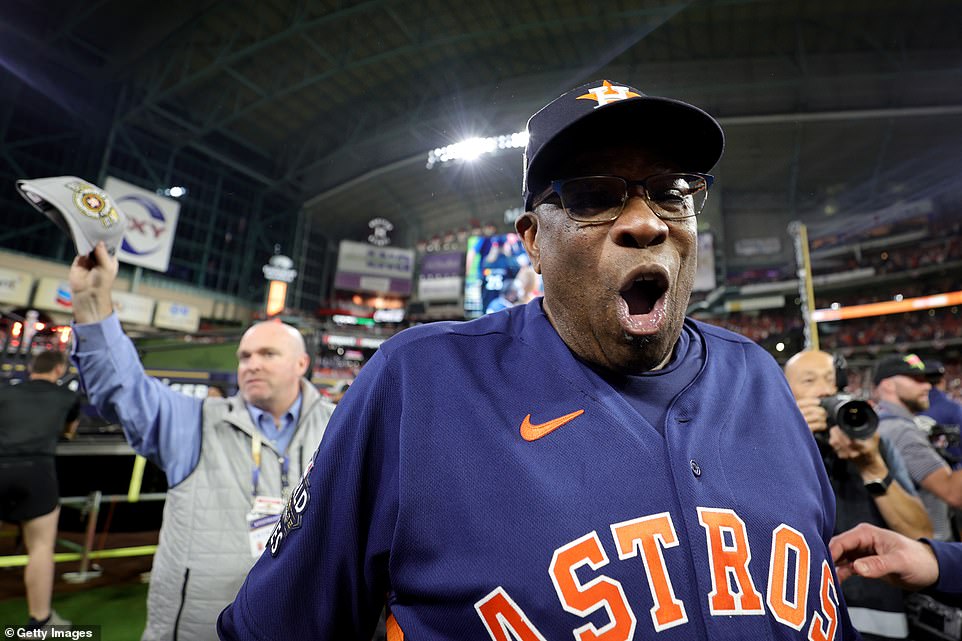 Manager Dusty Baker Jr. of the Houston Astros celebrates after defeating the Philadelphia Phillies 4-1 to win his first title 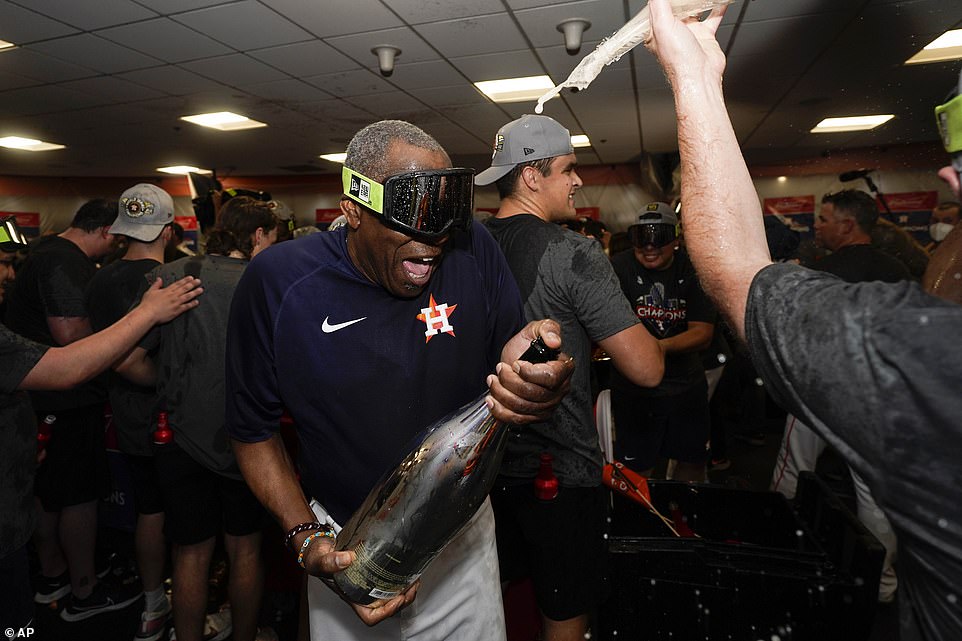 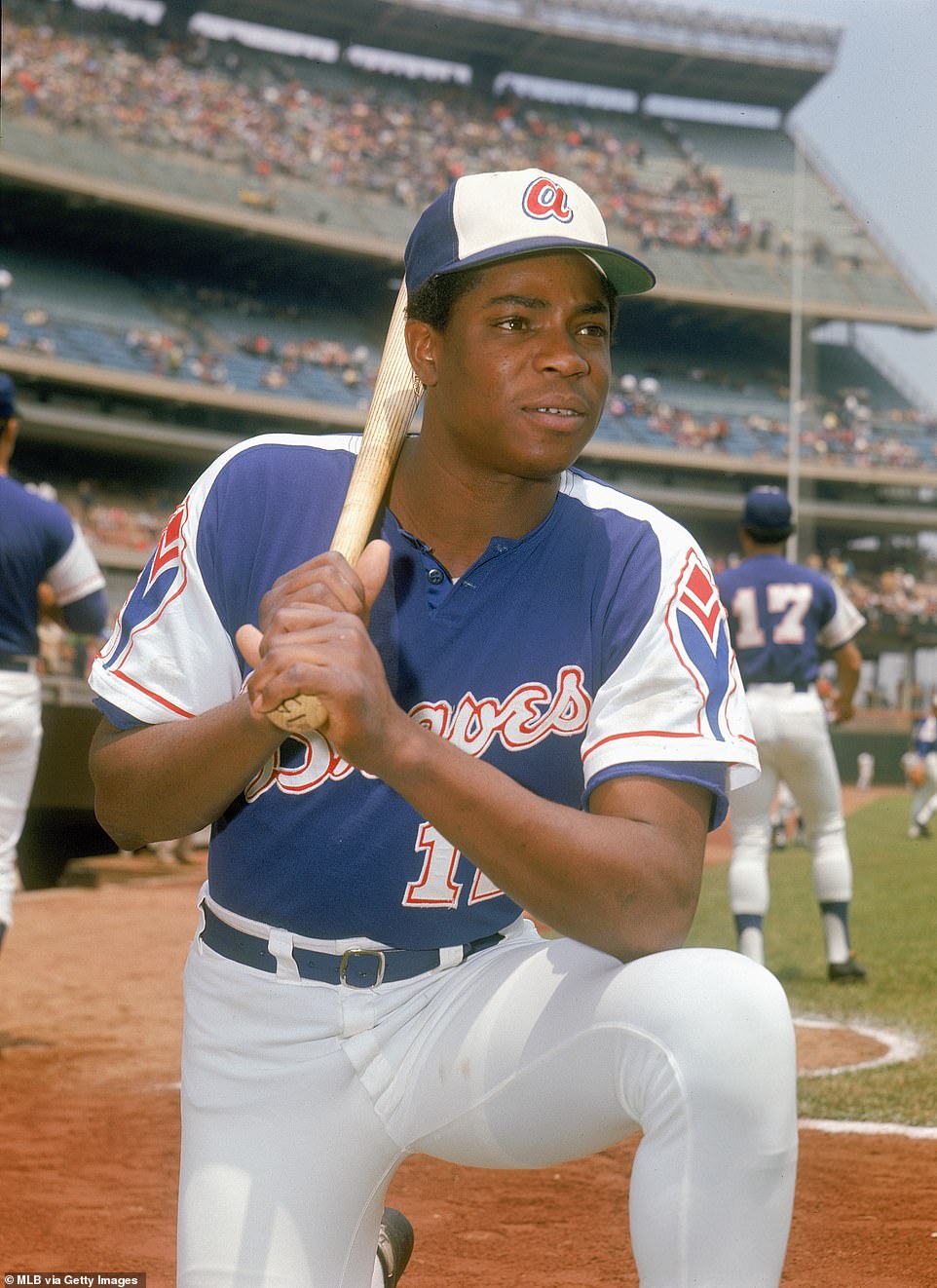 Dusty Baker of the Atlanta Braves poses before an MLB game at Shea Stadium in Flushing, New York

When Yordan Alvarez connected on a go-ahead three-run homer in the sixth inning, cameras panned to a beaming Baker who raised both arms high above his head. At the end of the game, the coaching and training staff circled around Baker, jumping up and down, chanting ‘Dusty! Dusty! Dusty!’ in the dugout before they joined the players on the field.

Baker’s wife, Melissa, and son Darren Baker were on the field to celebrate his long-awaited title and they all shared a hug not long after the final out.

‘He’s put in a lot of blood, sweat and tears and the game almost killed him when he had a stroke in 2017,’ she said. ‘So just to see all this come together — he’s worked so hard and if anybody earned it… it’s him.’

He became the oldest manager to win a World Series in his third trip as a manager to the Fall Classic. As a player he went three times with the Dodgers, winning it all in 1981.

He entered Saturday’s game as the winningest manager without a World Series title and improved to 2,094-1,790 with this most memorable victory.

‘I got 2,000 wins and all they talk about is I haven’t won the World Series yet,’ he said Thursday.

They can’t say that anymore. 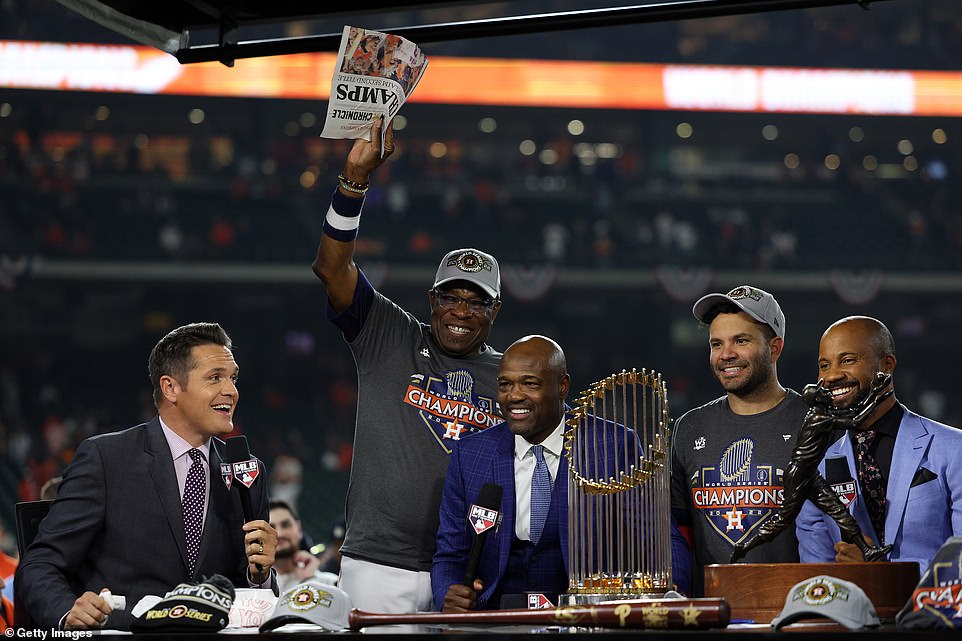 5: Manager Dusty Baker Jr. and Jose Altuve #27 of the Houston Astros celebrate after defeating the Philadelphia Phillies 4-1 to win the 2022 World Series 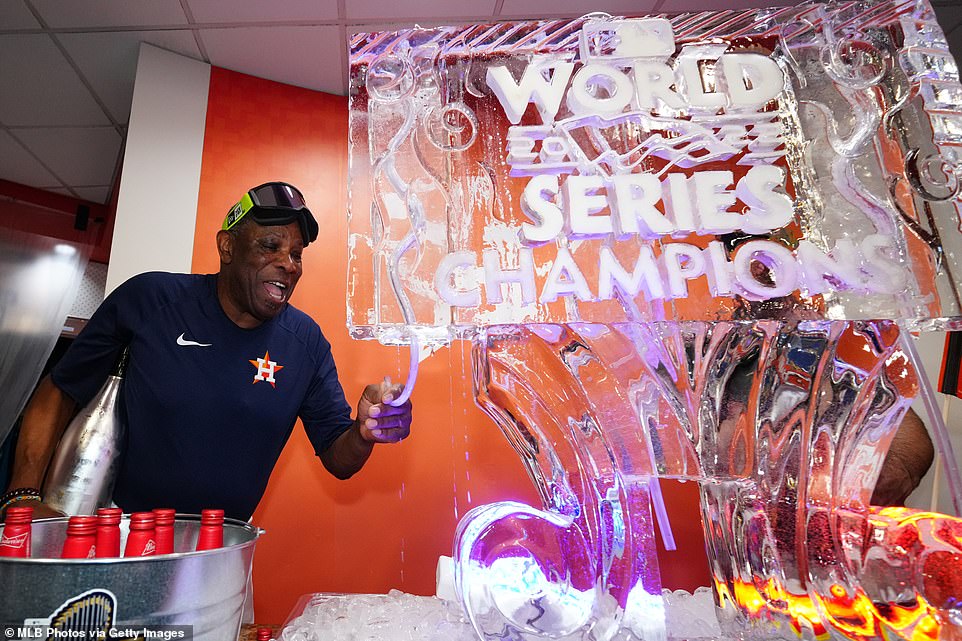 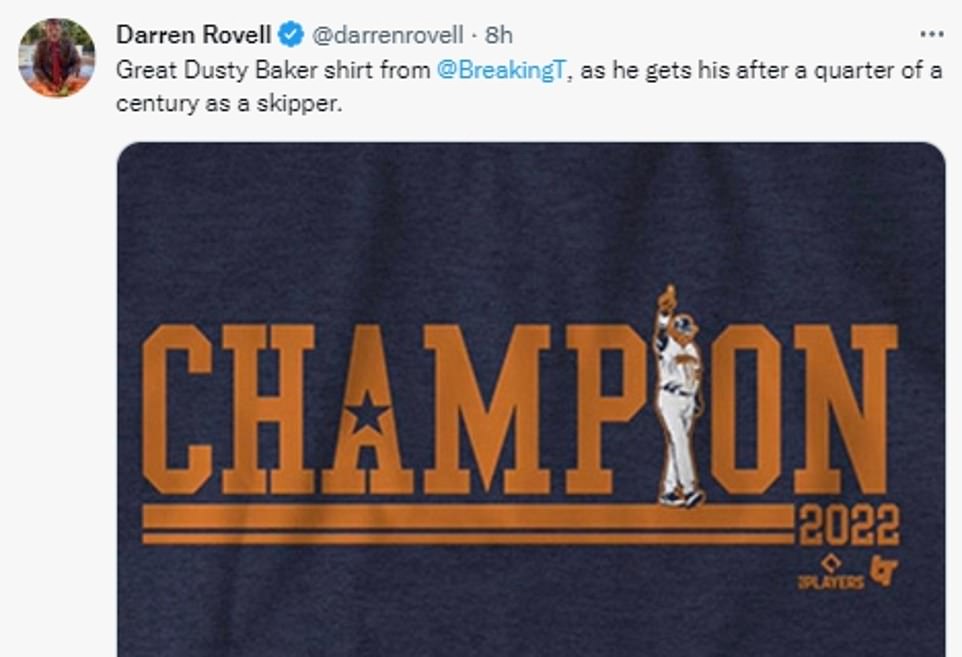 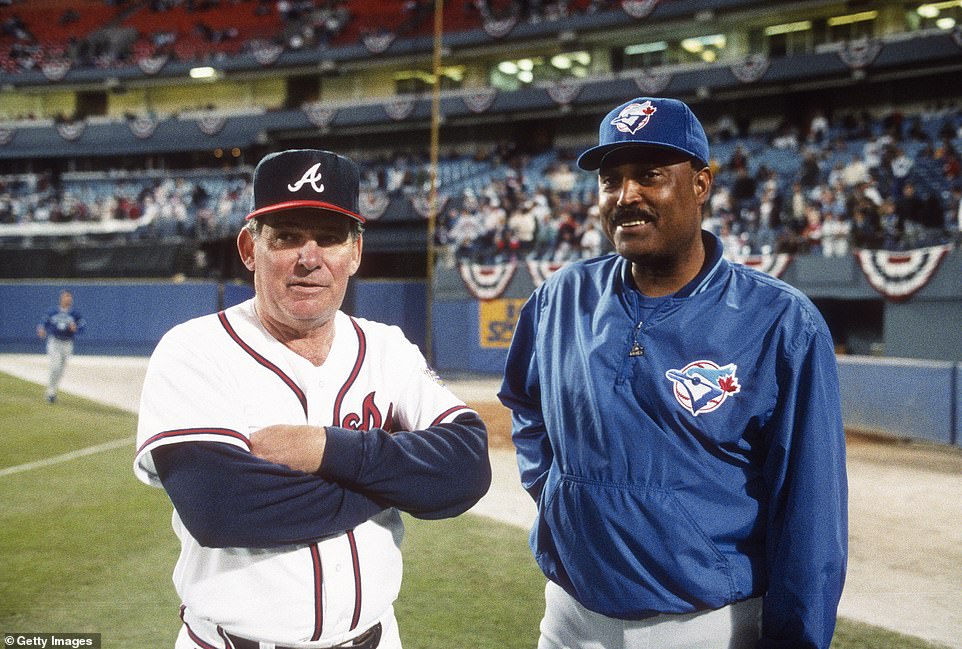 Baker joins Dave Roberts (Dodgers, 2020) and Cito Gaston (Blue Jays, 1992, 1993) as the only African-American managers to win a World Series 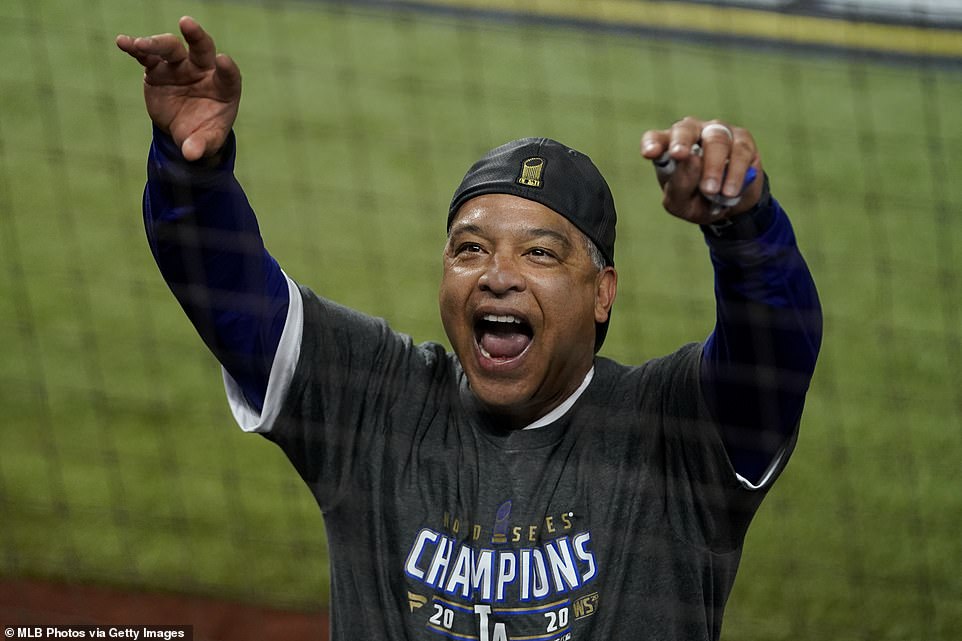 ‘I don’t think about being an African-American manager because I look in the mirror every day and I know what I am,’ he said before the game. ‘You know what I’m saying? (But) I do know that there’s certain pressure from a lot of people that are pulling for me, especially people of color. And that part I do feel. I hear it every day… and so I feel that I’ve been chosen for this.’

He didn’t realize he was the oldest manager to win a title, but he was keenly aware that he was just the third Black man to do so.

He helped the Astros to their second World Series title and first since the scandal-tainted one in 2017 that made Houston the most hated team in baseball. Baker helped clean up the team’s image after that and some begrudgingly began rooting for the Astros because they admired him. 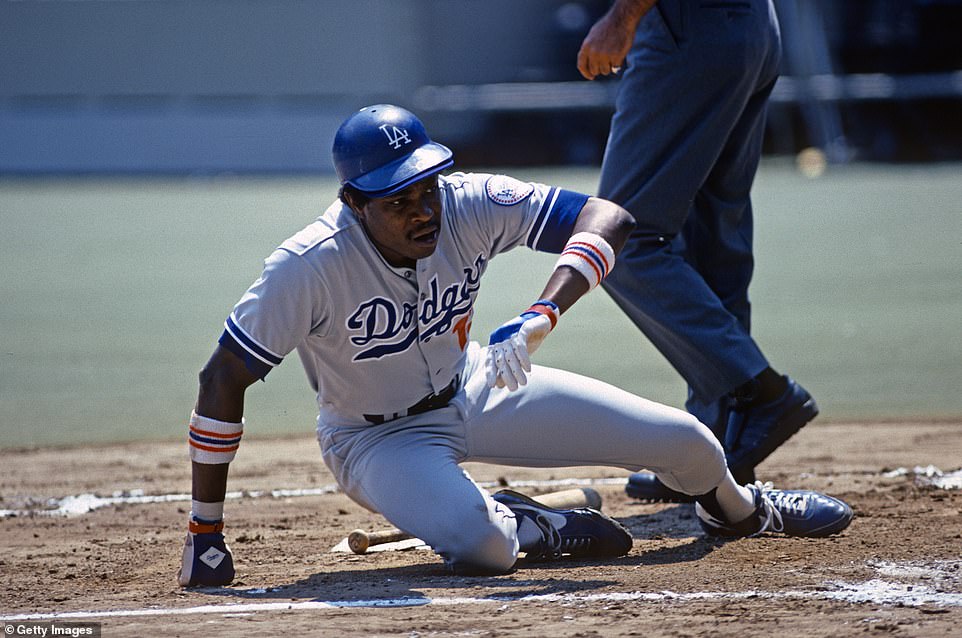 While beloved across the game, he quickly became a fan favorite in Houston. Saturday night several fans proudly displayed signs that read ‘Do it 4 Dusty.’

‘I’ve had some ups and downs, some disappointments, you know? But those disappointments make you stronger or they break you,’ Baker said. ‘So this has kind of been the story of my life where people tell me what you can’t do or even now, I won a bunch of games, my teams won a bunch of games, and all I hear about is what you don’t do, you don’t like this or you don’t like young players, you can’t handle pitchers, you can’t, and I’m like, well, damn, what did I do? After awhile I quit listening to folks telling me what I can’t do.’

Baker is the 12th manager in major league history to reach 2,000 wins and the first Black man to do it. Ten of the 11 other managers who have accumulated at least 2,000 wins are in the Hall of Fame. Bruce Bochy (2,003), who isn’t yet eligible, is the only exception.

Baker managed San Francisco, the Chicago Cubs, Cincinnati and Washington before coming to Houston. He’s the only manager in major league history to take five different teams to the postseason.

Baker had come close before. In 2002, his San Francisco Giants starring Barry Bonds entered Game 6 against the Anaheim Angels a win away from a title. As the road team for the last two games of that series, the Giants squandered a five-run lead in a 6-5 loss in the sixth game before the Angels won the title with a 4-1 victory in Game 7. 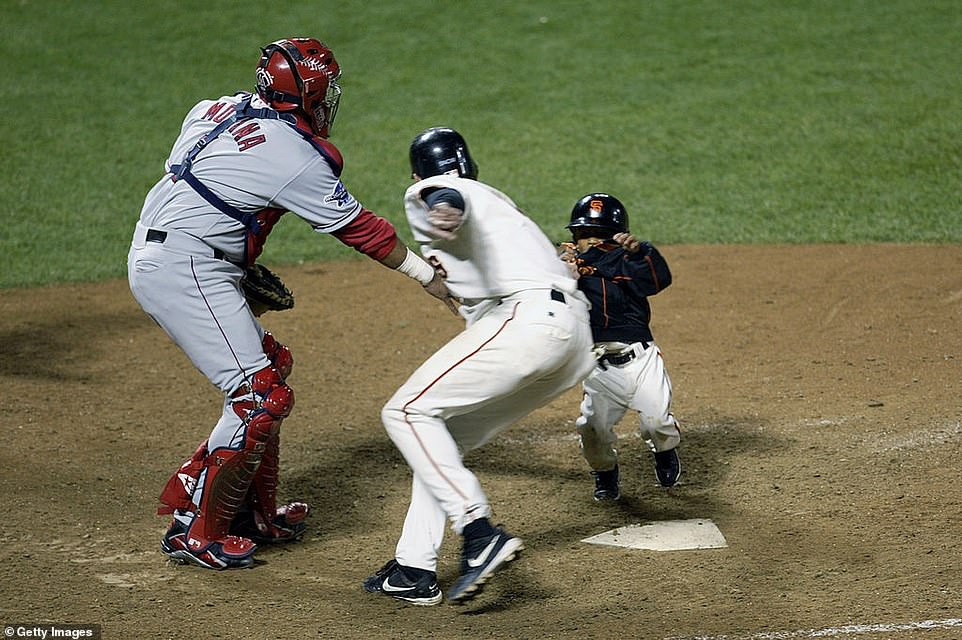 Three-year-old bat boy Darren Baker comes out to get Kenny Lofton’s bat during Game 3 of the 2002 World Series, but is saved from a possible collision by Giants first baseman JT Snow 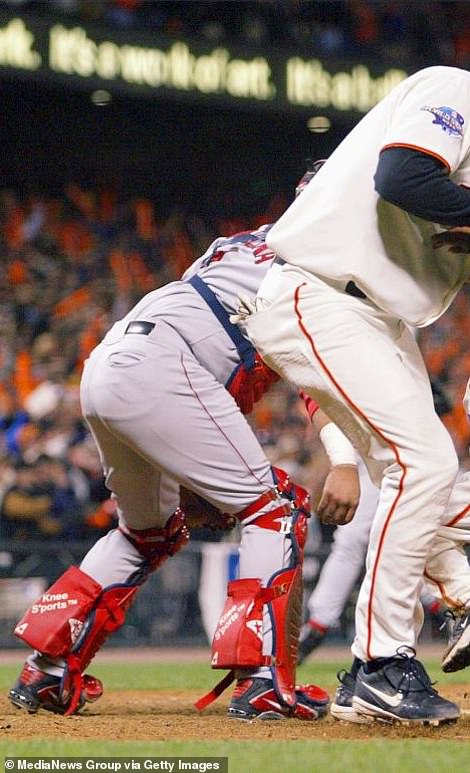 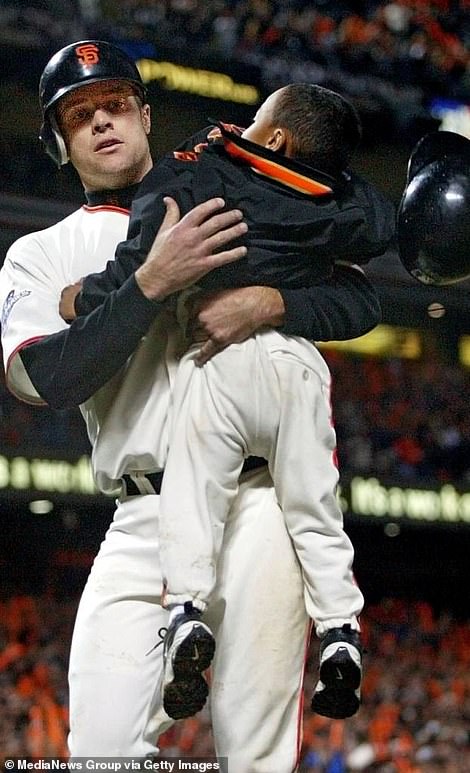 Darren is best remembered for a moment in Game 3 of the 2002 World Series when he prematurely left the dugout to retrieve the bat of Giants outfielder Kenny Lofton, who had tripled off of Anaheim Angels reliever Ben Weber in the seventh inning. What the three-year-old Baker didn’t realize was that Giants first baseman JT Snow was barreling down at home plate. Thankfully for Darren and his father Dusty, who was managing the Giants at the time, the quick-thinking Snow scooped up the unsuspecting bat boy and returned him to the dugout. Had it not been for Snow, Darren could have been trampled by Giants infielder David Bell, who also scored on the play

That Series may be best remembered for young Darren’s contribution.

Then just 3, Darren prematurely left the dugout in Game 3 to retrieve the bat of Giants outfielder Kenny Lofton, who had tripled off of Anaheim Angels reliever Ben Weber in the seventh inning.

What Darren didn’t realize was that Giants first baseman JT Snow was barreling down at home plate.

Thankfully for Darren and his father Dusty, who was managing the Giants at the time, the quick-thinking Snow scooped up the unsuspecting bat boy and returned him to the dugout.

Had it not been for Snow, Darren could have been trampled by Giants infielder David Bell, who also scored on the play. Bell is now the manager for the Cincinnati Reds, another position previously held by Baker.

Darren, an All-Pac 12 second baseman at the University of California, was picked in the 10th round of the 2021 MLB Draft by the Nationals, a club his father managed in 2016 and 2017. 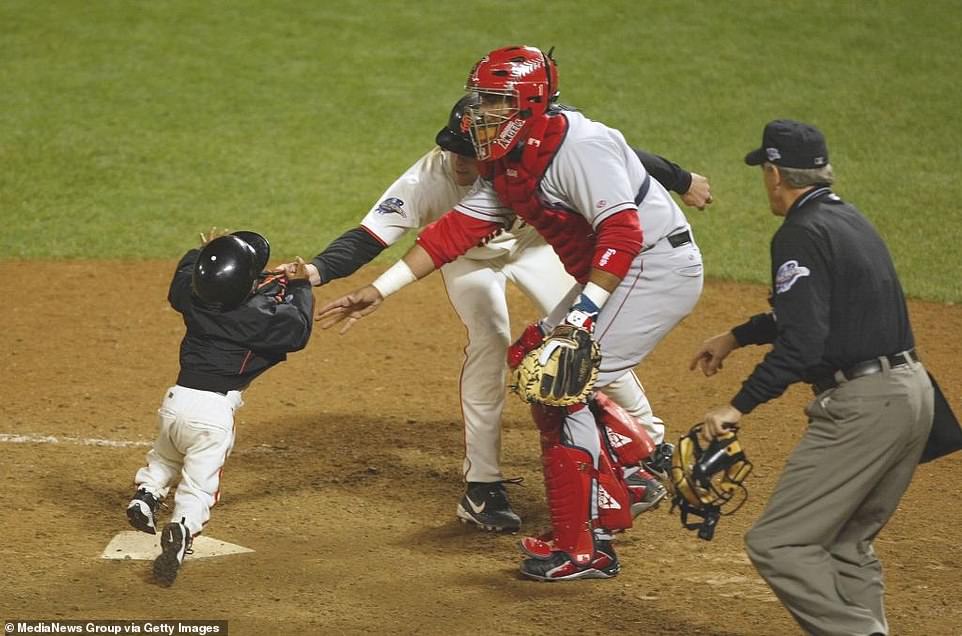 JT Snow rescues 3-year-old Bat Boy, Darren Baker from the basepath as David Bell scores a run in the 7th inning against the Angel

After the crushing loss in Game 7 of the 2002 World Series, Baker met with his father, Johnnie B. Baker Sr., who delivered a harsh message.

‘He goes: ‘Man, after the way (you) lost that one, I don’t know if you’ll ever win another one,’ Baker recalled last year.

Even though his father has been gone for more than a decade he stills thinks about him every day and often recalls that moment. He’s been driven to prove his father wrong.

After being fired by the Nationals following a 97-win season in 2017, Baker wondered if he’d ever get another shot to manage, much less win that elusive title.

Back home in Northern California, as he worked on his wine business and grew collard greens in his garden, he often felt perplexed he had been passed over for interviews so many times as managerial openings came and went, having made inquiries that he said were unanswered over the years.

Then came 2019 and the stunning revelation that the Astros had illicitly stolen signs in 2017 and again in 2018. Manager A.J. Hinch was suspended for a year and subsequently fired, making way for Baker to return to the game.

‘Dusty Baker coming back to manage the scandalous Astros to redeem themselves with another World Series championship and to win Dusty’s first World Series title as a manager is one of the best sports storylines of all time,’ tweeted sports personality Roosh Williams.

Baker took over for the 2020 COVID-19-shortened season. The Astros squeaked into the postseason as a wild-card team before heating up in playoffs to come one win shy of reaching the World Series.

Baker made his return to the Series last season but came up short again as Houston fell to Atlanta in six games.

Baker was lifelong friends with Aaron, who died in January 2021 at 86. He joked that he probably didn’t have Aaron on his side last year against his Braves, but that things should be different this time around.

‘He was probably rooting for the Braves last year,’ Baker said last month. ‘I figure now he’s rooting for me.’

Hammerin’ Hank would certainly have been proud to see his buddy finally reach this milestone since Baker was by his side for his biggest one.

Baker was on deck and among the Braves congregated at the plate to celebrate with Aaron on April 8, 1974, when he hit his 715th home run to pass Babe Ruth for most all-time. 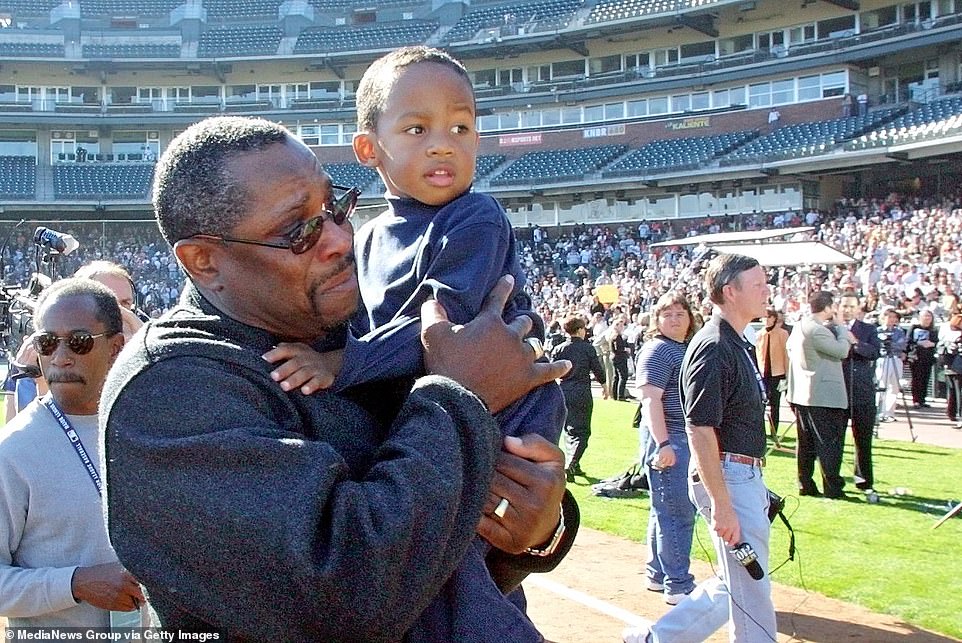 Tribune News San Francisco Giants manager Dusty Baker, center, can’t hold back the tears as he talks with the media at Pacific Bell Park Monday afternoon, following the Giants’ defeat in the World Series at the hands of the Anaheim Angels. Baker is holding his son Darren 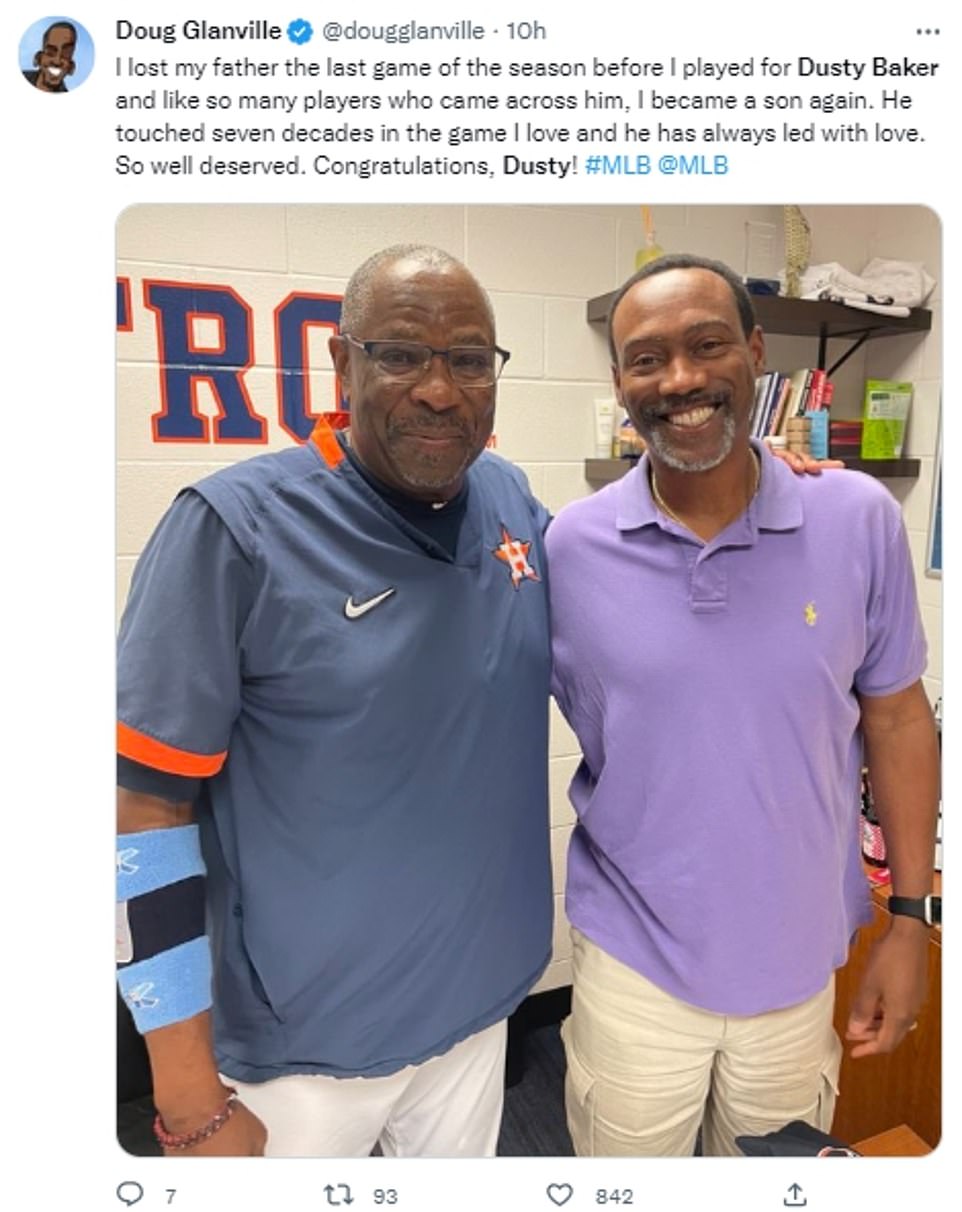 Beyond his connection to history, Baker will also be remembered for adding his own personal touch to the game. Many players have considered him a mentor, including ESPN personality and former Chicago Cubs outfielder Doug Glanville

Beyond his connection to history, Baker will also be remembered for adding his own personal touch to the game. Many players have considered him a mentor, including ESPN personality and former Chicago Cubs outfielder Doug Glanville.

‘I lost my father the last game of the season before I played for Dusty Baker and like so many players who came across him, I became a son again,’ Glanville wrote. ‘He touched seven decades in the game I love and he has always led with love. So well deserved. Congratulations, Dusty!’

When the fact that Baker’s future is uncertain because he isn’t under contract for next season was raised, he interjected before the question could be finished. ‘I ain’t worried about none of that,’ he said. ‘I’m just going to enjoy today and I’m sure it will be taken care of.’

Baker went through his normal routine before coming to the ballpark Saturday. He picked up coffee from a favorite spot in Rice Village and retrieved his clothes from the dry cleaners.

Baker also went to the cobbler to get some ‘expensive shoes’ that he was having repaired because the sole came off.

Good thing, too because after Saturday night’s win he’ll need a nice pair of shoes at the end of his career for a likely walk into the Hall of Fame. 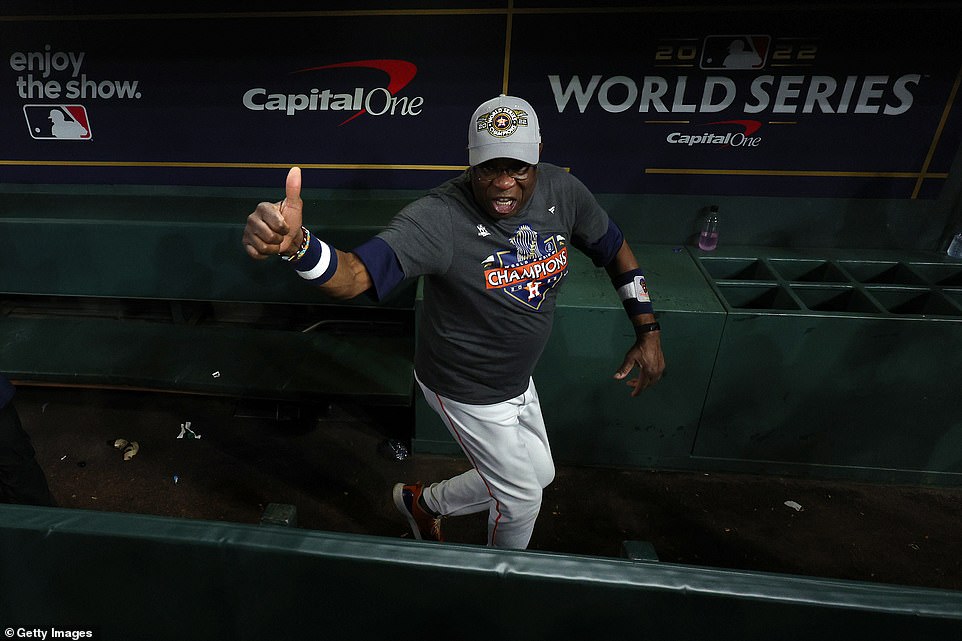