Kiwis book a spot in the semi finals after ‘best game of the World Cup so far’ with thrilling six-point win…but were Fiji robbed?

New Zealand will have the opportunity to enter a fifth World Cup final after a scratchy performance clawed a 24-18 win over Fiji Bati on Saturday which was dubbed the tournament’s best fixture – but one call could’ve changed everything.

Fiji took out of the gates with scintillating skill and structure, scoring two unanswered tries in the first 20 minutes. 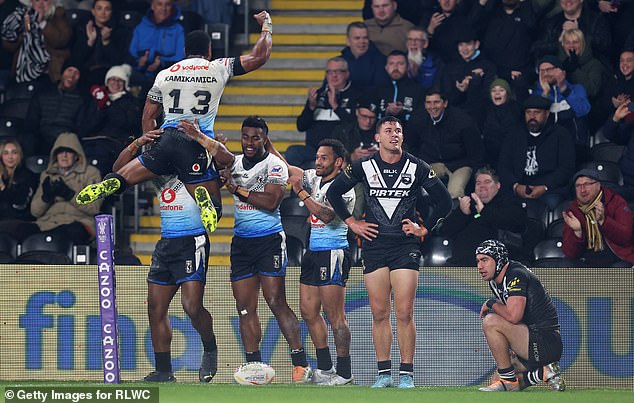 Captain and NRL veteran Kevin Naiqama crossed in the 17th minute to take the Bati to a 12-0 lead.

Fox commentator Andrew Voss said: ‘they are up for the fight, they have the class to trouble New Zealand.’

Voss later said it was ‘the best game of the World Cup so far’, with Queensland legend Corey Parker in full agreeance.

At the turn of the half the Kiwi’s showed their strength in the middle field through Briton Nikora, who burst onto the try line after a bizarre failed tackle attempt. 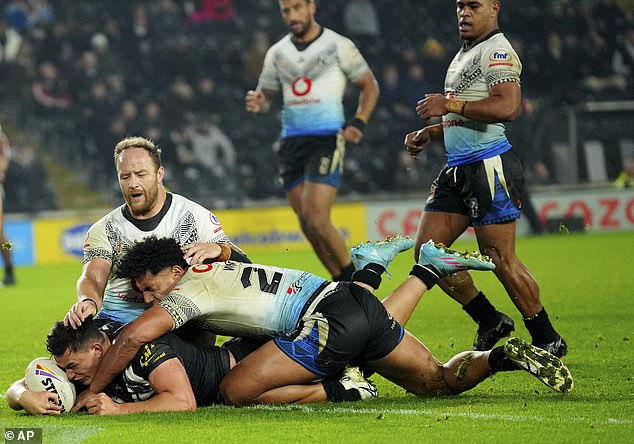 A touch of Naiqama short-side brilliance was the last of the Fijian’s lead, as Joey Manu skipped through a gap to level scores.

Kiwi coach Michael Maguire said his side must lift if they are to dethrone Australia and England.

‘It wasn’t the style we would’ve liked to have played but they stuck to the plan and got through,’ he said.

‘We need to get better and the start, they jumped us and you can’t do that.

‘It’s probably the third game that we’ve had our spine all together, so we’ll be better again on the back of that.’

In the 70th minute, a contentious bunker call of a strip against big man Viliame Kikau put a pen through a Bati semi final birth. 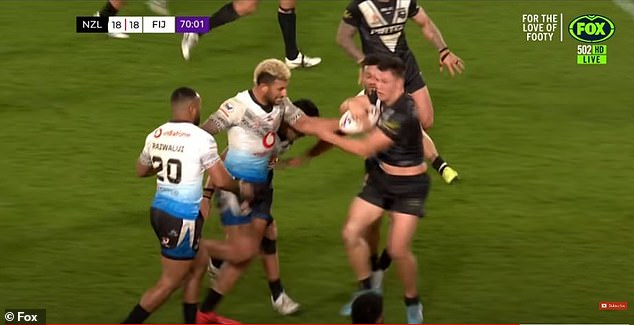 Viliame Kikau was penalised for stripping the ball of Joey Manu, but replay vision showed the fullback talked his way out of a certain loose carry

New Zealand captain Joey Manu used his sides captain’s challenge and pleaded the ball was forced out of his grip by the back-to-back premier lock.

Referee Gerard Sutton originally deemed a knock on, but went back on his call due to a bunker decision – which was evidently wrong given the replay vision.

Ring-in kicker Jordan Rapana iced the game late with a penalty granted from the challenge, before going over in the corner to well and truly put Fiji’s dream to bed. 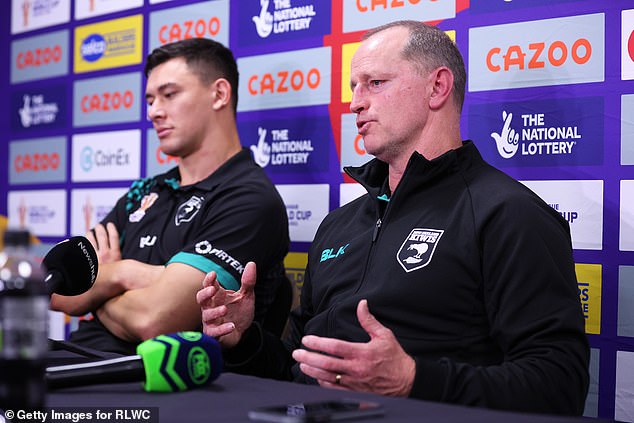 Manu was awarded man of the match for the second time in his cup campaign and lines up a mouthwatering battle against teammate and world no.1 fullback James Tedesco next week.

Maguire says his side will start strong next week, given the finals experience in the roster who know all too well about intensity and discipline.