The uptake in ill will directed at Tucker stems from the fall out of the fight between Michigan and Michigan State players.

‘First and foremost, Michigan State football is about integrity, discipline, unselfishness, toughness and accountability,’ Tucker said during the show. 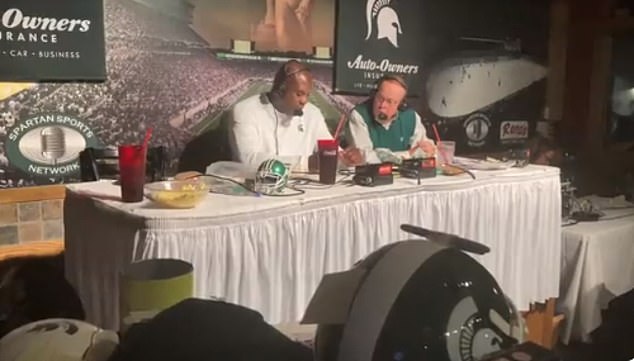 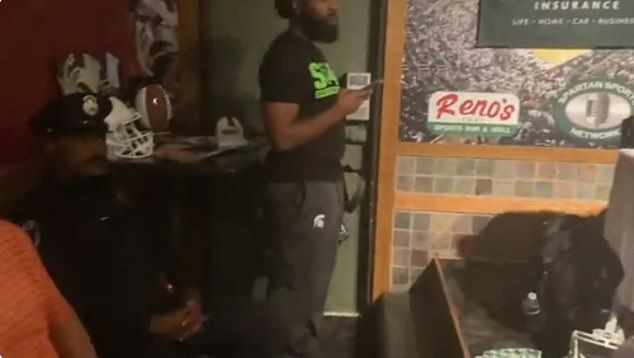 ‘I made a decision to suspend the players based on video evidence that was provided to me and our athletic director.’

‘Our entire team will be cooperating with law enforcement and the Big Ten Conference to fully evaluate the events that took place in Ann Arbor. When we have a full report, I’ll address further actions, if needed.’

Defensive back Ja’Den McBurrows (yellow) was pushed, punched and kicked in the tunnel

Michigan coach Jim Harbaugh said Saturday night that one of the players, who he did not identify, might have a broken nose. A social media post on Sunday showed a Wolverine, who appears to be Green, getting roughed up by Spartans.

Green, in another post, is surrounded by police while shouting across the tunnel at Michigan State players.

‘Two of our players were assaulted,’ Harbaugh said. ‘I saw on the one video. 10 on one. It was pretty bad. It needs to be investigated.’

According to a report from ESPN, Green plans to press criminal charges.

Power restrictions in place across at least 7 Ukrainian regions