FIFA have been labelled ‘ludicrous and embarrassing’ after president Gianni Infantino and secretary general Fatma Samoura called for all 32 nations competing at the World Cup in Qatar to ‘focus on football’ and ‘stop handing out moral lessons.’

The message went down like a lead balloon – especially with Amnesty International – given the Gulf state’s poor human rights record, treatment of foreign workers and controversial stance on LGBTQ rights.

Graham Arnold’s Socceroos were in the firing line from FIFA following their combined statement of protest late last month, which saw 15 current national team players speak out in a video on events in the Arab country they didn’t agree with.

The collective message was clear – the decision to award World Cup hosting rights to Qatar has ‘resulted in the suffering and in the harm of countless of our fellow workers’, while also referencing that homosexuality is currently illegal in the country.

‘We stand with FIFPro, the Building and Wood Workers International, and the International Trade Union Confederation, seeking to embed reforms and establish a lasting legacy in Qatar,’ the video from the Socceroos outlined. 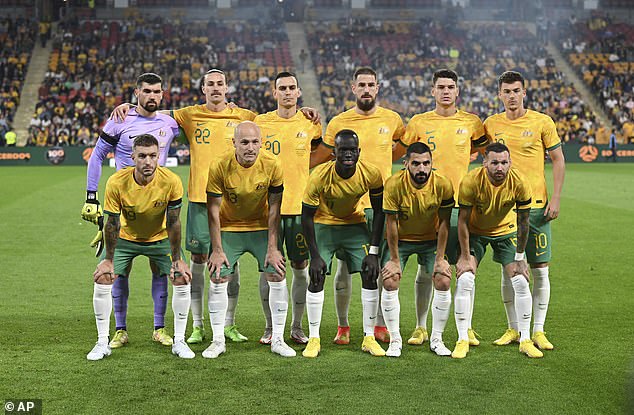 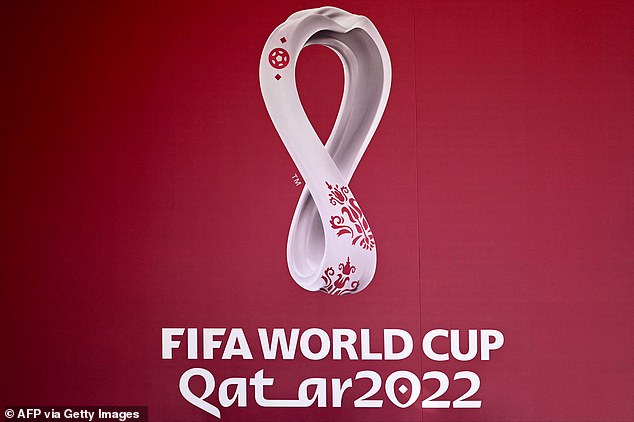 This is ludicrous and embarrassing in so many different ways. But what Fifa forgets is that it regularly wants to cash in on the power of the game and how it can change the world. Suddenly now it’s all just about the football https://t.co/PlfQTb0bCu

‘This must include establishing a migrant resource centre, effective remedy for those who have been denied their rights, and the decriminalisation of all same-sex relationships.

‘These are the basic rights that should be afforded to all and will ensure continued progress in Qatar…[and] a legacy that goes well beyond the final whistle of the 2022 FIFA World Cup.’

The primary aim of the exercise involving the Socceroos was an ‘opportunity to raise awareness of some important issues and help affect change globally and domestically.’

While many applauded the Aussie players for speaking out, they were also condemned by others.

‘Fine virtue-signalling words… presume you will now be boycotting the tournament?’ he posted to his 7.9million followers on Twitter.

‘Or don’t you guys care THAT much?’ 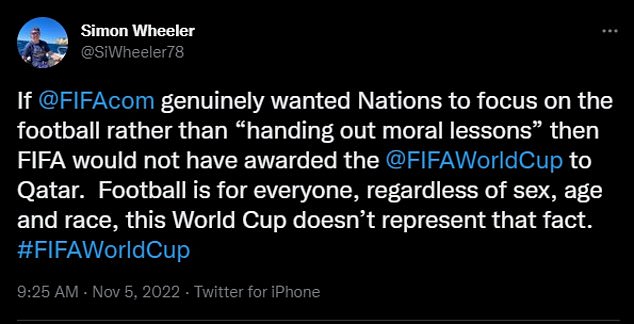 Twitter lit up after FIFA’s letter to the 32 nations became public knowledge, with this user stressing ‘football is for everyone, regardless of sex, age and race’ 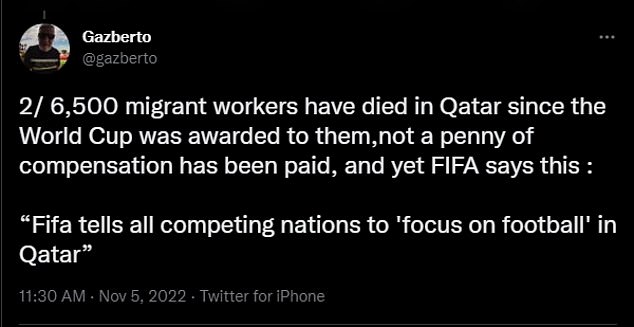 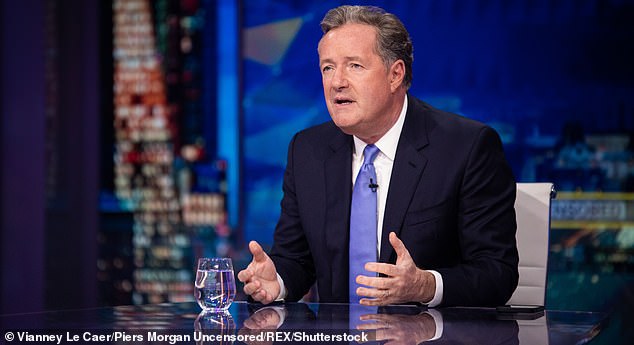 With the World Cup soon kicking off in Doha in the the oil-rich, highly conservative Middle Eastern state, FIFA has now urged footballers to focus on their preparation as athletes.

FIFA president Gianni Infantino and secretary general Fatma Samoura have clearly had enough of the political messaging, with their letter blunt.

‘Please, let’s now focus on the football,’ the letter stated.

‘We know football does not live in a vacuum and we are equally aware that there are many challenges and difficulties of a political nature all around the world.

‘But please do not allow football to be dragged into every ideological or political battle that exists.’

Earlier this week, the Arab League states hit out at ongoing criticism of Qatar, calling it a ‘defamation campaign’.

They also felt some Western nations – such as Australia – were being racist.

‘One of the great strengths of the world is its diversity, and if inclusion means anything, it means having respect for that diversity,’ a letter said.

‘No one people or culture or nation is ‘better’ than any other.’

Nations such as England, Germany and France are expected to wear ‘one love’ armbands in Qatar to promote inclusion and equality.

The hosts kick-off the World Cup on November 21 when they take on Ecuador.

Seoul Halloween crush: How the disaster in Itaewon unfolded