Astros take World Series lead over Phillies with 3-2 win in Game 5, as Justin Verlander gets first-ever Series win to put Houston within just one game of clinching the title

Jeremy Pena homered among his three hits and drove in two runs, Justin Verlander tossed five solid innings and the Houston Astros defeated the Philadelphia Phillies 3-2 in Game 5 of the World Series.

The Astros head home with a 3-2 lead in the best-of-seven series, needing to win on Saturday or on Sunday (if necessary) to claim the championship.

En route to his first-ever World Series win, Verlander (1-0) gave up four hits and one run with six strikeouts and four walks. The two-time Cy Young Award winner began the night 0-6 with a 6.07 ERA in eight World Series starts. 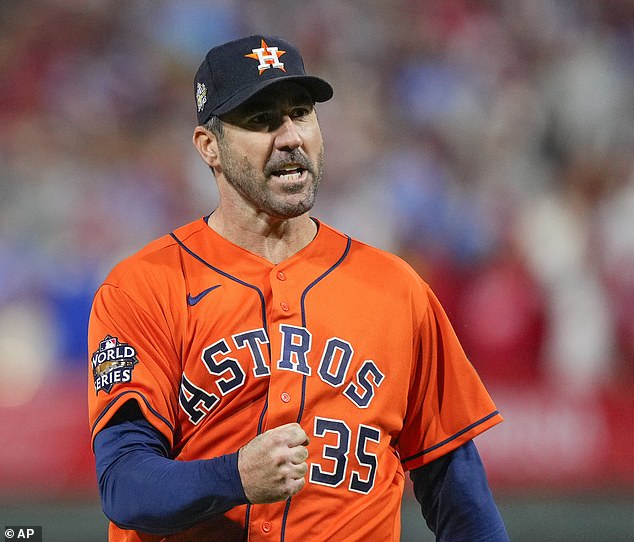 Houston relievers Hector Neris and Bryan Abreu combined for two scoreless innings, and Rafael Montero gave up one run in one-third of an inning. Ryan Pressly got the final five outs to record his fifth save of the postseason.

In the ninth, after Rhys Hoskins struck out, Astros center fielder Chas McCormick made a crashing catch against the wall on a ball hit by J.T. Realmuto. Bryce Harper was struck by a pitch before Nick Castellanos grounded out to shortstop to end the game. 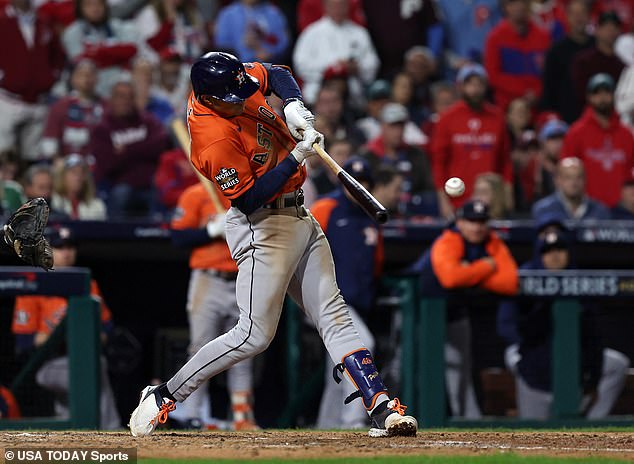 Jeremy Pena drove in two runs for the Astros during to their 3-2 win vs. the Phillies in Game 5

Kyle Schwarber led off the bottom of the first with a home run, Jean Segura had two hits and an RBI and Alec Bohm added two hits for the Phillies.

Phillies relievers Connor Brogdon and Jose Alvarado combined for three shutout innings, but Seranthony Dominguez allowed a run in the eighth. David Robertson and Zach Eflin each tossed a shutout inning as well. 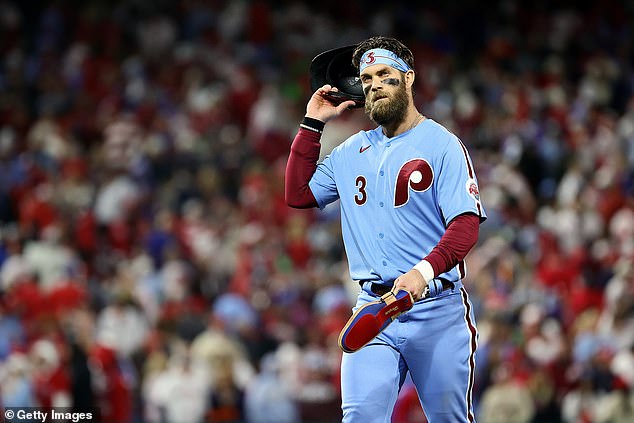 Bryce Harper cut a dejected figure after Philly lost, as they now need to win twice in Houston

Altuve led off the game with a double, advanced to third on a fielding error by center fielder Brandon Marsh and scored on an RBI single by Pena.

The Phillies quickly tied the game at 1 when Schwarber ripped a solo homer.

After loading the bases with two outs in the second, Verlander rallied to strike out Hoskins swinging. Pena responded with a solo homer to left to open the fourth, giving the Astros a 2-1 advantage.

Harper doubled with two outs in the fifth, but Castellanos flied out to left on the 10th pitch of the at-bat against Verlander.

Houston’s Yuli Gurriel doubled and was on third with no outs in the seventh. One out later, McCormick grounded into a 5-2-6-3 out with Hoskins tumbling over his head while tagging out Gurriel.

The Astros went ahead 3-1 in the eighth when Altuve walked, Pena singled and Yordan Alvarez hit an RBI groundout to first. Hoskins bobbled the ball long enough for Altuve to score.

Segura lined an RBI single to right to close the gap to 3-2 in the bottom of the eighth, snapping an 0-for-20 stretch for the Phillies with runners in scoring position. Pressly then entered with one out and runners on first and third, and he struck out Marsh before Schwarber grounded out sharply to Trey Mancini at first base.