Carolina’s P.J. Walker hooked up with diving D.J. Moore for a 62-yard touchdown heave with 12 seconds left in regulation, but the Panthers still suffered a 37-34 overtime loss.

Walker was on target as the Panthers’ quarterback once again, a week after a surprise breakout to upset Tom Brady and the Buccaneers.

Making a second straight start in place of Baker Mayfield, Walker found Moore in the endzone with a perfect 62-yard bomb with just 12 seconds of the fourth quarter remaining. 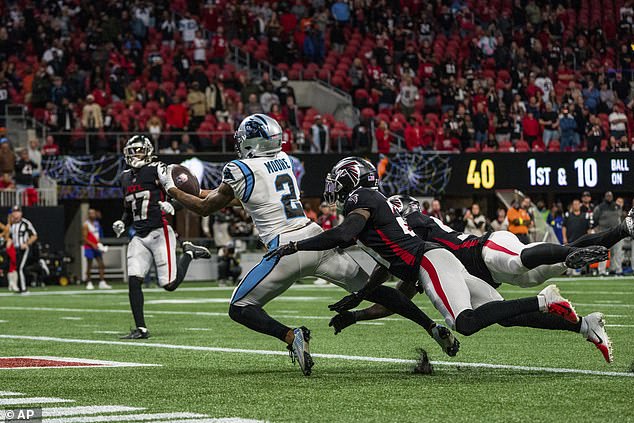 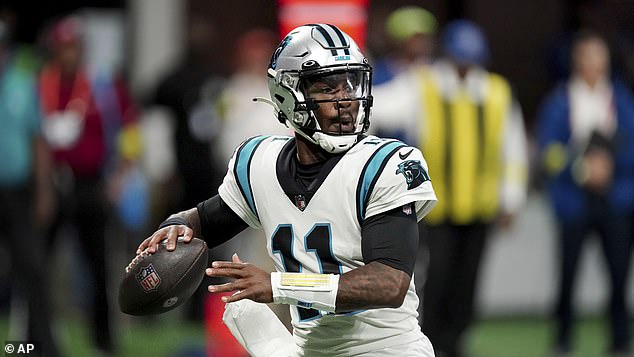 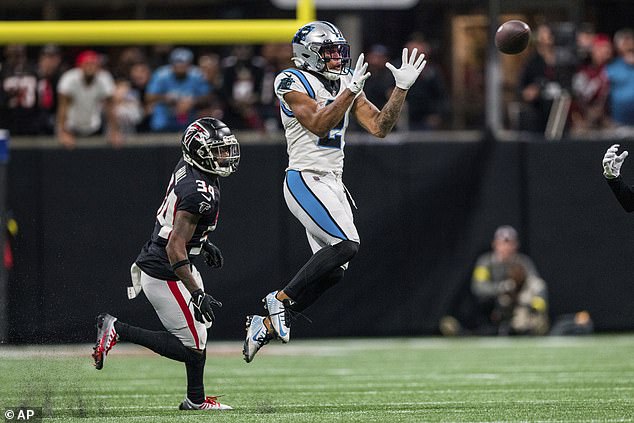 Even Kansas City Chiefs quarterback Patrick Mahomes had respect for the throw as he took to Twitter to praise it.

He wrote: ‘Has to be the best throw of the year and not even close!’

However, Moore, who made the outrageous touchdown catch, went on to help his opponents.

An unsportsmanlike penalty on Moore contributed to a longer extra-point kick that was off the mark that would have given Carolina a last-gasp win but instead kept the game tied at 34-34.

After reeling in Walker’s pinpoint Hail Mary, Moore immediately removed his helmet, which the NFL prohibits.

Still, the Panthers (2-6) appeared set up to win after C.J. Henderson intercepted a pass in overtime. Eddy Pinerio missed a 32-yard field goal.

But Younghoe Koo booted a 41-yard field goal with 1:55 left in overtime as the Atlanta Falcons pulled out a wild 37-34 victory against the visiting Carolina Panthers on Sunday afternoon.

Given another chance on offense, the Falcons (4-4) drove 55 yards to set up Koo’s winner. 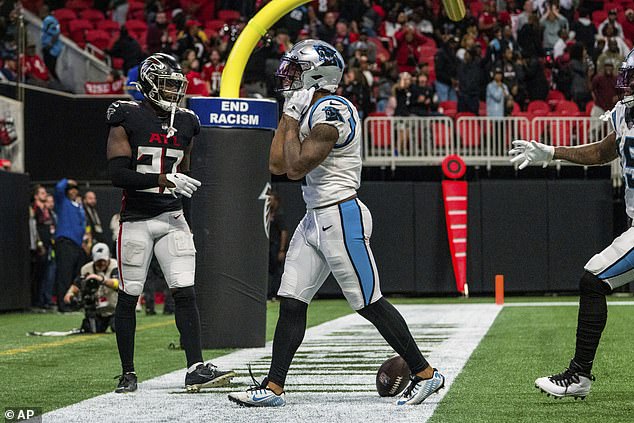 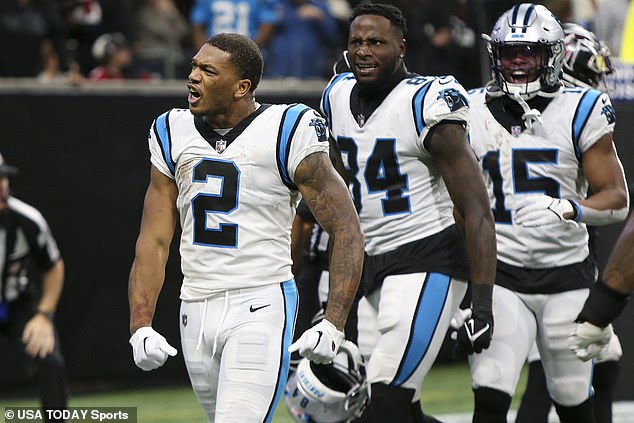 However, the NFL prohibits players immediately removing their helmets in celebration 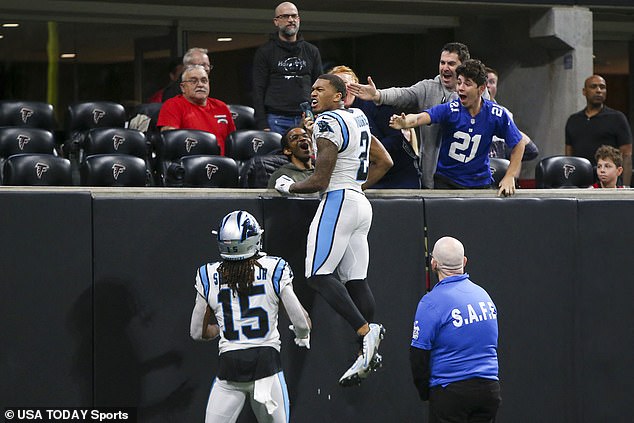 Marcus Mariota’s third touchdown pass of the game went to Damiere Byrd for 47 yards with 2:14 to play as the Falcons appeared in good shape. Byrd, who spent his first three NFL seasons with the Panthers from 2016-18, ran the final 32 yards of the play after making the grab.

The Panthers failed to pick up a first down on their next possession before Koo’s 34-yard field goal for Atlanta with 36 seconds left for a 34-28 edge.

Mariota threw for 253 yards by completing 20 of 28 passes with two interceptions. Linebacker Lorenzo Carter returned an interception for a touchdown for the Falcons.

D’Onta Foreman ran for three touchdowns and a two-point conversion, with his 12-yard run with 3:06 remaining putting Carolina ahead. He gained 118 rushing yards on 26 carries in the team’s second game since the trade of star running back Christian McCaffrey. 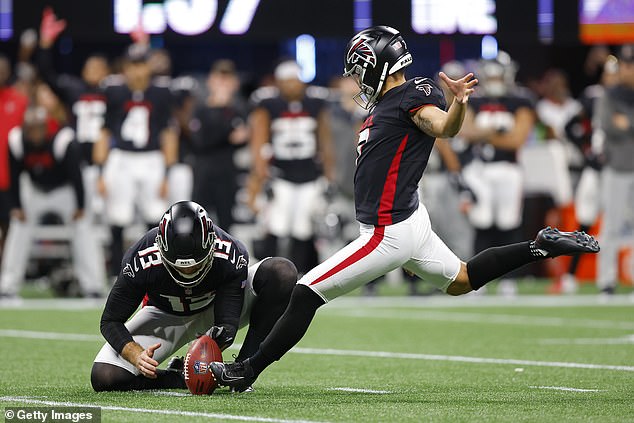 Younghoe Koo booted a 41-yard field goal with 1:55 left in overtime for the Falcons’ win

The Panthers, whose only previous wins came against NFC South opposition by defeating New Orleans and Tampa Bay, are 1-2 under interim coach Steve Wilks after the firing of Matt Rhule.

Walker completed 19 of 36 passes for 317 yards with an interception for Carolina, which gained 472 yards of total offense through regulation after entering the weekend with an NFL-worst 271.9 per game.

Pineiro made field goals from 37 and 42 yards. 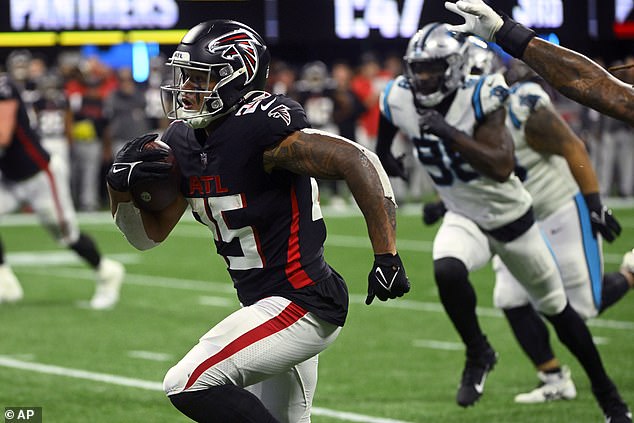 Carolina responded with a 10-play drive, with Foreman scoring on fourth-and-goal on a 1-yard run and then tacking on the conversion run.

The game was tight throughout. Mariota connected with tight end Kyle Pitts for a 2-yard touchdown play to put the Falcons on top 7-3.

Foreman’s 2-yard run gave the Panthers a lead with 4:51 left in the first half.

But Carter picked off a screen pass and had only Walker to dodge on the way to the end zone for a 28-yard return with 41 seconds to play in the half.

Keys to averting disaster in a big crowd