Several fans got into an altercation and, according to reports, someone believed a gun had been pulled, sparking panic among attendees. Fans, players, and coaches quickly fled the gym, although police did not find any weapon despite a ‘thorough search.’

Footage of the evacuation surfaced online, and although Bronny is tough to pick out of the crowd, nearly everyone on camera can be seen moving for the exits. 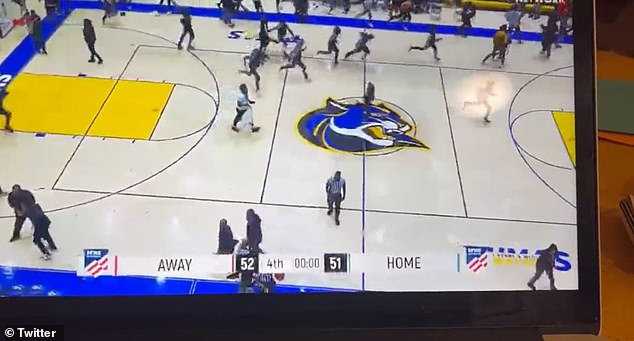 Footage of the evacuation surfaced online, and although Bronny is tough to pick out of the crowd, nearly everyone on camera can be seen moving for the exits 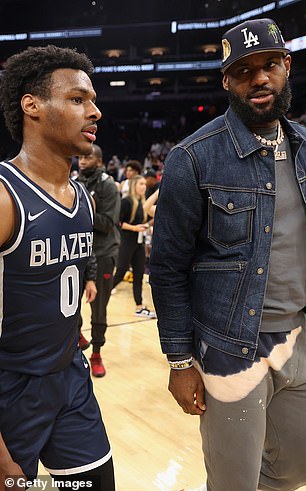 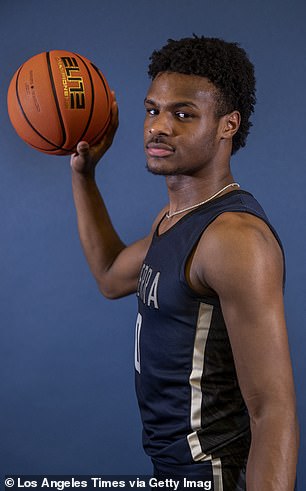 Fortunately, ‘there were no injuries,’ a police spokesperson told TMZ.

The teams did not finish the game,’out of an abundance of caution,’ DeMatha head coach Mike G. Jones III told TMZ.

Bronny had 11 points in the game on just two field goals.

A game had been scheduled for Sunday, but it was canceled by Paragon Marketing Group, which organized the event.

‘Given the incident in the stands tonight during the CBC vs. Stags game at Wise High School, we have cancelled Sunday’s event,’ Rashid Ghazi, the president of Paragon Marketing Group, said in a statement.

‘We are making the decision out of the utmost of caution to ensure player and fan safety. Refunds will be available via Go Fan.’

Paragon is no stranger to the James family, having secured the rights for ESPN to broadcast one of LeBron’s high school games back in 2002, when he was at Akron’s St. Vincent-St. Mary.

The sports marketing company made news in September of 2021 over a high school football game that it organized when one of the teams was discovered to be a ‘post-grad football academy’ rather than an actual high school.

This was only revealed after the team, known as Bishop Sycamore, lost 58-0 on ESPN, raising questions about its level of play and, by extension, the institution itself.

The game, played at the Pro Football Hall of Fame in Canton, Ohio, was meant to be a showcase of two teams with elite college prospects. Instead, Bishop Sycamore was quickly exposed by bigger and faster players from a Florida high school, IMG Academy.

Bronny, the 45th-ranked recruit according to 247 Sports and 34th-ranked according to ESPN, already has several suitors, reportedly including college basketball bluebloods Duke, Kansas, Kentucky and North Carolina. (Coincidentally, the top-ranked recruit on both websites is DJ Wagner, the son of LeBron’s former Cleveland Cavaliers teammate, Dajuan Wagner)

James, a Laker since 2018, has expressed interest in playing with Bronny, who could be drafted by an NBA team as early as 2025.

‘My last year will be played with my son,’ James told The Athletic in February. ‘Wherever Bronny is at, that’s where I’ll be. I would do whatever it takes to play with my son for one year. It’s not about the money at that point.’

James would not be the first professional athlete to play alongside their child.

NHL legend Gordie Howe teamed with sons Mark and Marty on the WHA’s Houston Aeros in the 1970s. Mark and Gordie also played together on the Hartford Whalers before and after the WHA’s merger with the NHL.

In 1990, former Major League All-Star Ken Griffey Sr. signed with the Seattle Mariners, where his son and namesake had already begun his Hall of Fame career.

The father-son duo hit back-to-back home runs against the California Angels on September 14, 1990.