Fans react to ‘absolutely incredible’ Kevin De Bruyne free-kick which sent Manchester City top of the Premier League, with some claiming strike confirms Belgian as ‘the best midfielder in the world’

Jack Grealish won a free-kick on the edge of the Foxes’ penalty area four minutes into the second half, and Belgian De Bruyne stepped up to take it.

His precision shot hit the post and went in, leaving Leicester goalkeeper Danny Ward helpless to prevent the Belgian’s goal – which ended up being the winner.

The result lifted Man City top of the Premier League – at least until Arsenal play Nottingham Forest on Sunday afternoon. 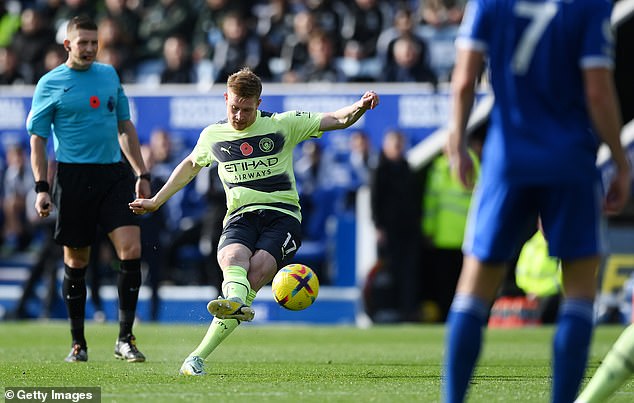 One fan responded to the goal by tweeting: ‘Kevin De Bruyne is the best Midfielder in the world!!! No one compares to him’, while a second added: ‘De Bruyne is just unreal man’

‘Just an incredible footballer, De Bruyne. Don’t care who he plays for, just love watching him play football’ was another response to the Belgian’s pin-perfect strike.

A further tweet read: ‘That is absolutely incredible De Bruyne’, while another City fan wrote ‘Kevin the magician’ and ‘King De Bruyne’ accompanied by light blue hearts and regal crowns.

Manchester City fans were impressed with the goal, as were the TV pundits on BT Sport

Rio Ferdinand told BT Sport: ‘That man (De Bruyne) is the difference maker, whether it’s creating goals or scoring free-kicks. City waited for a moment and it came.’

Meanwhile, fellow BT colleague Joe Cole said: ‘De Bruyne delivers when it matters most. He’s an unbelievable technician, he’s a joy to watch. It wasn’t a vintage Man City performance but they did enough.’

Manchester City’s attentions turn to another Champions League game against Sevilla on Wednesday, before their next league game at home to Fulham next week. 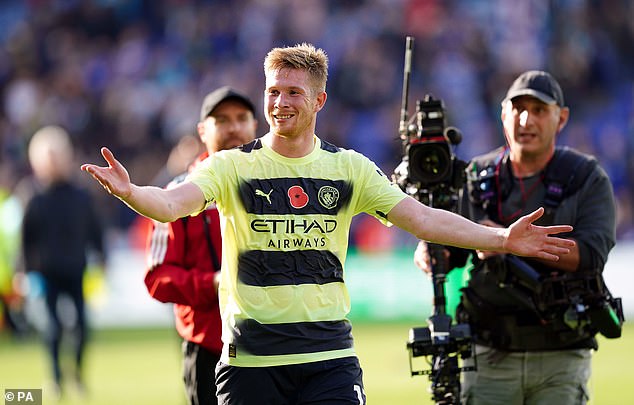