The Brooklyn Nets are not going to trade former MVP Kevin Durant, and will instead move forward with their partnership, the team said in a statement Tuesday.

‘Steve Nash and I, together with [owners] Joe Tsai and Clara Wu Tsai, met with Kevin Durant and [his agent] Rich Kleiman in Los Angeles yesterday,’ read the statement from Nets general manager Sean Marks. ‘We have agreed to move forward with our partnership. We are focusing on basketball, with one collective goal in mind: build a lasting franchise to bring a championship to Brooklyn.’

Tuesday’s announcement seemingly ends trade speculations surrounding Durant, who has been linked to a number of teams since the Nets were swept by the Boston Celtics in the first round of the Eastern Conference playoffs back this spring.

And it’s not just Durant who will return for the Nets’ core next season. 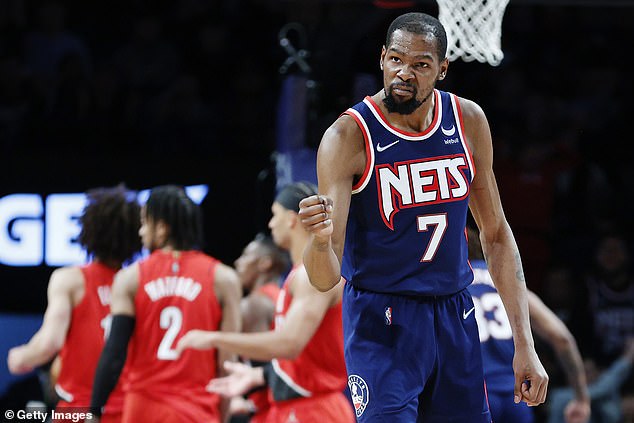 The Brooklyn Nets are not going to trade former MVP Kevin Durant, and will instead move forward with their partnership, the team said in a statement Tuesday 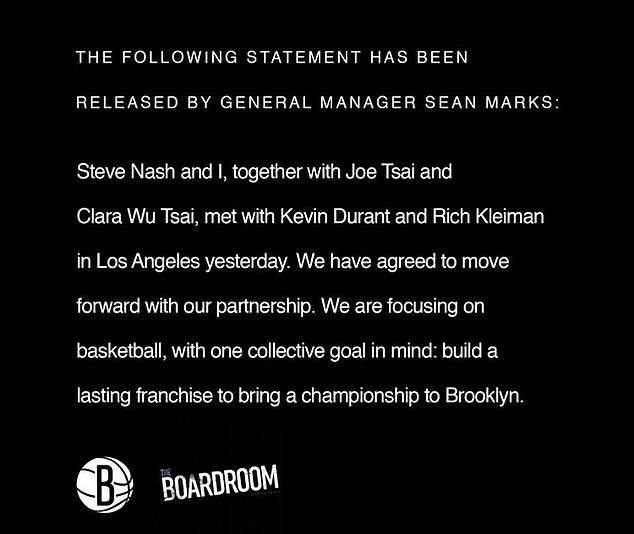 Just a week ago, Durant was shooting down rumors that he would rather retire than play another season for the Nets.

Naturally, the NBA universe seized upon the topic, forcing the two-time Finals MVP to deny the claims.

‘S*** is comical at this point,’ Durant wrote on Twitter.

‘I know most people will believe unnamed sources over me but if it’s anyone out there that’ll listen, I don’t plan on retiring anytime soon.’ 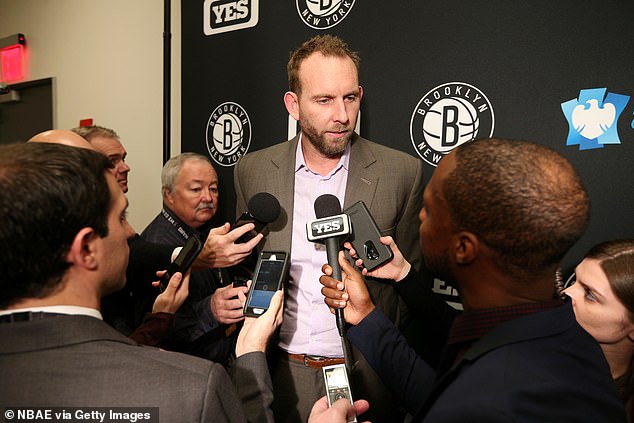 The report comes after Durant reiterated his trade demands to team owner Joseph Tsai in London two weeks earlier. As Charania reported for The Athletic at the time, Durant said he would stay if Tsai were willing to fire head coach and Nash as well as Marks.

Tsai responded with a public statement last week, voicing his support for both Nash and Marks. 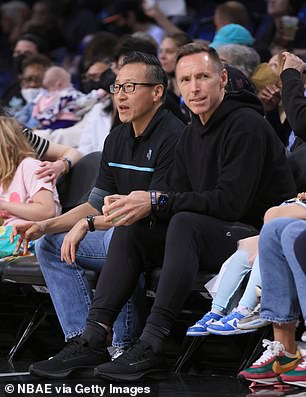 Nets owner Joseph Tsai (left) and Steve Nash (right) sit together at a New York Liberty game. Tsai is also the owner of the WNBA club

The specific reasons for Durant’s reported dissatisfaction remain unclear, at least publicly, but Charania reported earlier this month that the Nets have ‘direct knowledge’ of the details.

Durant was previously blamed by some for the exit of former Nets head coach Kenny Atkinson, who mutually parted ways with the organization in 2020, although it remains unclear if he had a hand in that decision.

The Nets were swept in the first round of the Eastern Conference playoffs last season by the Boston Celtics, who reportedly offered All-Star Jaylen Brown in exchange for Brooklyn’s disgruntled superstar forward.

The Nets, meanwhile, asked for both Brown and All-Star Jayson Tatum, according to Adam Himmelsbach of the Boston Globe.

Durant still has $198 million and four years remaining on his contract, while Brown has two seasons and $56 million left on his.

Durant’s future in Brooklyn had been complicated by the situation with Irving, who opted into the final year and $37 million of his contract to stay with the team, but was rumored to be pushing for his own exit. 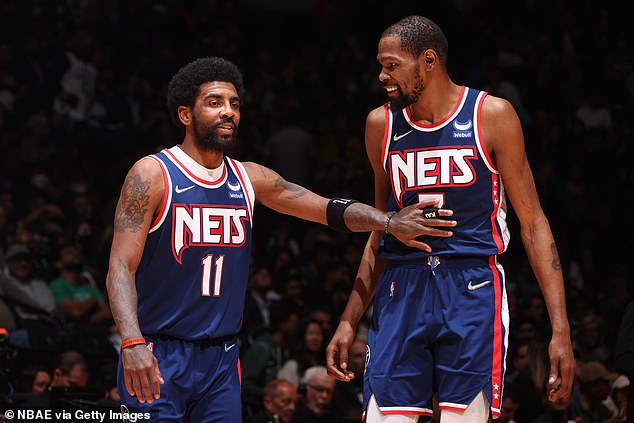 Durant’s future in Brooklyn had been complicated by the situation with Irving (left), who opted into the final year and $37 million of his contract to stay with the team, but was rumored to be pushing for his own exit

Now, Charania reports, Irving appears to be staying in Brooklyn: ‘… he has been working out with teammates and holding constructive dialogue with the organization this offseason.’

The Nets jumped at the chance to sign both Durant and Irving in 2019, despite the fact that the former was returning from a ruptured achilles and wouldn’t be able to play until the 2020-21 season.

While Durant has four years and $194 million left on his contract, Irving can become a free agent next summer.

The Nets will now move forward with a core of Irving, Durant and former All-Star Ben Simmons, who has yet to play for the Nets since being acquired from Philadelphia in exchange for James Harden last season.

Simmons has battled back issues and mental health problems in recent years, but is considered to be one of the best defenders in basketball.

The Nets have also added another defensive stopper, forward Royce O’Neal, in an offseason trade with Utah.