By Kathryn Batte For The Daily Mail

It is hard to imagine an England squad without Jill Scott. Since making her international debut in 2006, she has won 161 caps and played in 10 major tournaments, eight with England and two with Team GB.

Scott, who announced her retirement from the game on Tuesday, was there when women’s football was on the periphery and there when it reached the pinnacle.

It was fitting that she had the last touch of the Euro 2022 final, heading away a long ball from Germany goalkeeper Merle Frohms before the final whistle went. Scott had been introduced as an 88th-minute substitute to bolster an England midfield that was being overrun as extra time loomed. In her 16-year international career, Scott had never let her country down and she was not about to start now. 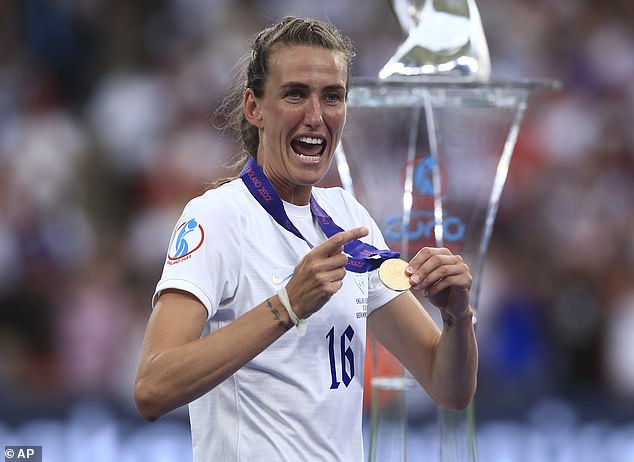 She was here, there and everywhere in those 30 minutes of extra time. When she was fouled by Sydney Lohmann she let out a passionate, expletive-filled outburst at her opponent. It got the crowd going and shortly after England took the lead. Scott made tackles, helped run the clock down and headed away every ball until that very last kick.

She did not start a single match at the Euros and played just 50 minutes as a substitute. But there was nobody more deserving of a winner’s medal. In the last 16 years Scott has given her country everything and she retires as a legend of the game.

The 35-year-old has been the life and soul of the Lionesses’ dressing room. Her team-mates would joke that she was the worst person to sit next to on a plane because she would ‘chew your ear off’. 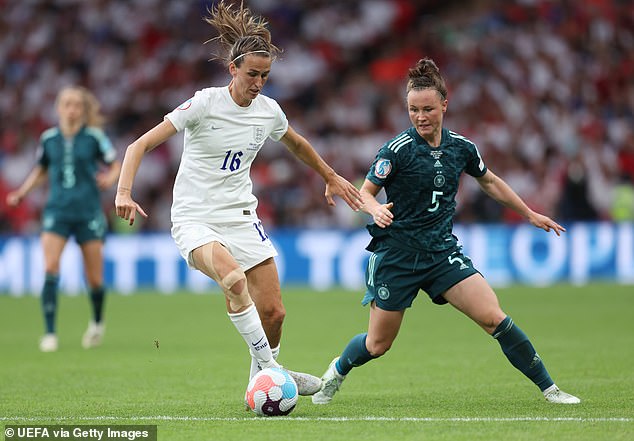 Scott is, by her own admission, ‘cheeky’ and ‘silly’. As her team-mates danced to Freed from Desire at the celebration in Trafalgar Square after the Euros final, Scott picked up a microphone, went over to the trophy (which was wearing a bucket hat) and asked it: ‘How do you feel?’

But although Scott was known for being the joker of the team, she was also a player the youngsters could look up to. The likes of Ella Toone and Alessia Russo grew up watching her and will have undoubtedly benefited from her guidance.

There is no ego with Scott. Born in Sunderland, she comes from a humble background and recalled having to regularly ask her mum to borrow £50 to fill up her car to get to training. When she started out, England players would train in local prisons because they provided the best strength and conditioning equipment. Scott joked she was ‘thrown out’ for being ‘too sociable’. 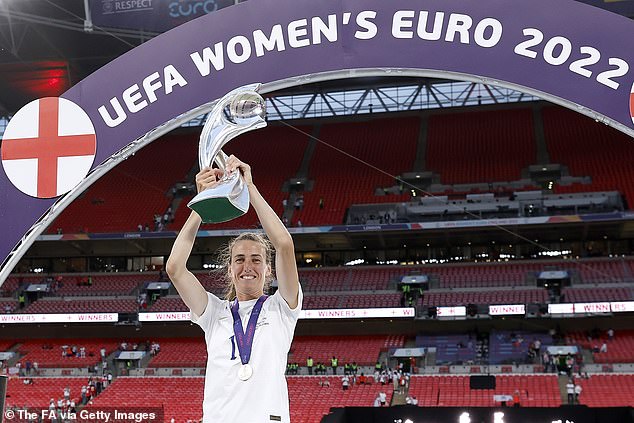 The game has come a long way since then and it has players like Scott to thank for that. She is the only person to play in two European finals for England. She was part of the Lionesses team beaten 6-2 by Germany in 2009, when women’s footballers were still part-time. In that same year she was one of the first England players to be awarded a central contract of £16,000 a year, which permitted up to 24 hours a week of part-time work.

It was not until she joined Manchester City in 2013, nine years into her career and after spells at Sunderland and Everton, that she became a full-time professional. She went on to win every domestic honour. The only thing missing was an international trophy. Finally, it arrived this summer.

After 18 years in the thick of it, on the pitch at Wembley, Scott allowed herself a moment of quiet reflection. ‘We had celebrated, the streamers were going off and I was just sitting there with my medal on the grass for an hour and a half, taking it all in,’ she wrote yesterday.

Spain: Gunman euthanised before he can stand trial