Phil Neville signs his SON! Versatile defender Harvey, 20, is given a first-team contract with Inter Miami until 2024… and he has the option to extend his stay by two more years

According to a team statement, the fullback’s contract will run through the 2024 MLS season, with a club option to extend the contract to either 2025 or 2026.

Crucially, Harvey Neville will not occupy an international roster slot once he receives his U.S. green card.

Inter Miami says Neville is the third player this season promoted to their first team ‘from the Club’s developmental pathway.’ 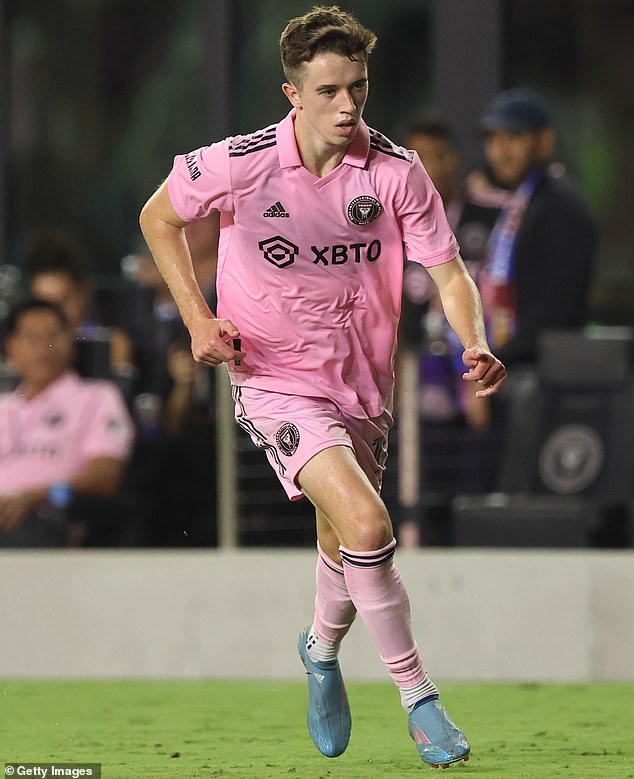 ‘Harvey has developed well over these last two seasons with Inter Miami CF II. We’re pleased with his progress as a young player in our system and feel his versatility will offer us cover in a number of areas,’ Chief Soccer Officer and Sporting Director Chris Henderson said.

This season in MLS Next Pro – the MLS academy league – Neville has started and played in 15 matches, logging over 1,300 minutes. That’s good for third most.

He’s completed 77% of his passes and bagged two assists in that time frame, won 14 tackles, and has four yellow cards to his name.

Harvey does have some experience with the first team, having been called up and making a brief appearance in a U.S. Open Cup match against South Georgia Tormenta FC.

Additionally, he appeared in two friendlies for the first team, scoring a goal in a 4-0 win over Club Universitario de Deportes of Peru.