By Jack Gaughan for the Daily Mail

Sometimes Manchester City‘s opponents are best placed to offer a real gauge of where they are at and, a few days after last week’s win at West Ham, Michail Antonio was still talking about them.’Their system is liquid,’ he said. ‘It can’t be contained. They’re rotating everywhere. It was a masterclass.’

High praise. And the thing is, City are not usually quite this strong during the opening weeks.

A defeat here, dropped points there and general stodginess as a consequence of extended summer breaks scheduled by Pep Guardiola. 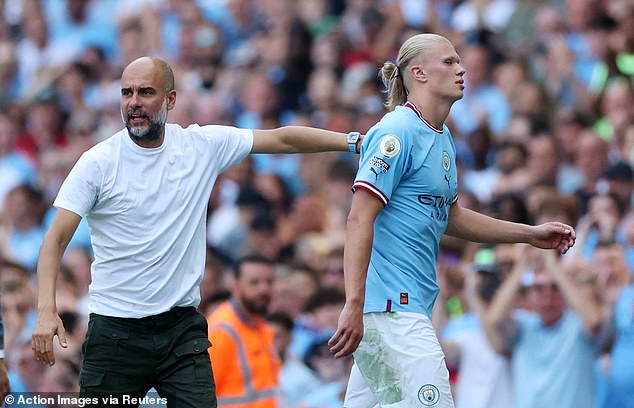 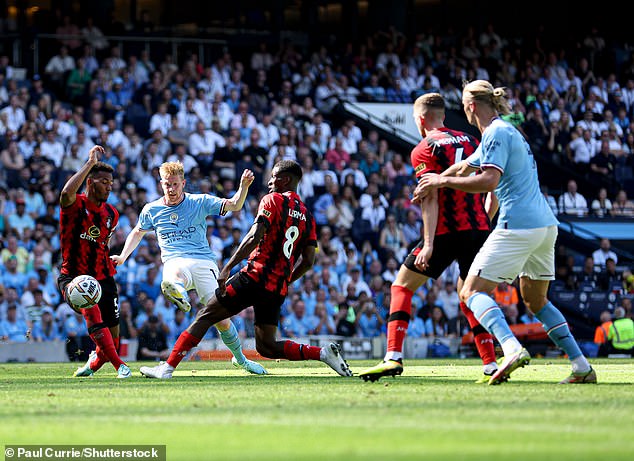 But out in the USA last month the squad looked a bit different. Sharper than normal, even though pre-season was equally short.

There were moments in the Community Shield where Guardiola will believe they ought to have put more pressure on Liverpool yet, when the proper business started,

City have laid their marker. West Ham was a more impressive result than Saturday’s against Bournemouth for obvious reasons, although the level of control and performance remained the same.

City have conceded just two shots on target in 180 minutes, scored six goals, handed a debut to 17-year-old Rico Lewis and barely broken sweat — even in this heatwave.

‘Positionally, you often find they always have it locked down.’

Guardiola seems to think the World Cup will have a bearing on the title race and stressed the importance of a fast start. Qatar will halt the rhythm of teams and comes at a time when City are normally going through the gears, racking up lengthy runs of consecutive victories to compensate for dropped points around this time.

‘In these periods we drop points and this season when we are strong in October, November, December it is the World Cup so they don’t allow us to play so we have to be consistent (now).’

A number of times this week, Guardiola has referenced that three injuries — to Aymeric Laporte, Kalvin Phillips and Cole Palmer — have left City down to 15 senior outfield players and their small squad may become a factor, because nobody is really sure of the World Cup’s impact.

One significant boost for City is that Erling Haaland will not be in Qatar, able to rest up for a few weeks after Norway’s failure to qualify.

This might see him play more often than new signings usually do during the first months, with a mid-term holiday on the horizon.

It ties in with the need for this quick start — City have Newcastle, bogey team Crystal Palace and Nottingham Forest next — and, while there is work to be done integrating Haaland, the early signs are strong.

He only touched the ball eight times on Saturday but one of them was a clever assist for new captain Ilkay Gundogan’s opener.

He doesn’t really need to touch the ball all that much; City do their attacking through midfielders and that will never change. Instead, Haaland occupied two defenders throughout.

That played into the hands of Kevin De Bruyne and Phil Foden, who both scored before half-time, before an own goal from Jefferson Lerma.

The 'traumatic experience' of US monkeypox patients