Melbourne’s run home to the NRL finals has been dealt another big blow with star halfback Jahrome Hughes set to miss the remainder of the regular season with a shoulder injury.

The New Zealand international suffered the injury late in the first half and played through to the break before being taken from the match against the Gold Coast Titans on Friday.

Hughes’ suspected dislocation could rule him out of the remaining regular season, leaving coach Craig Bellamy to shuffle his hand.

The 27-year-old missed the second half of Melbourne’s 32-14 win over the Titans when he landed on his outstretched left arm in a Beau Fermor tackle. 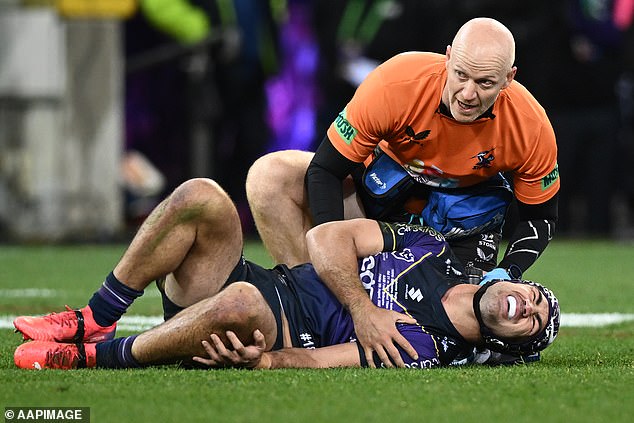 The gun no.7 later clutched at his shoulder, the same one he dislocated back in 2018.

Fox League reporter Lara Pitt said post-match that the half would undergo scans on Saturday.

‘He’s with the physio in the sheds, the club telling me he simply had no strength in that shoulder, there were concerns he dislocated it in contact but it popped straight back in,’ she said.

The scans will determine Melbourne’s roster for the last four games before finals. 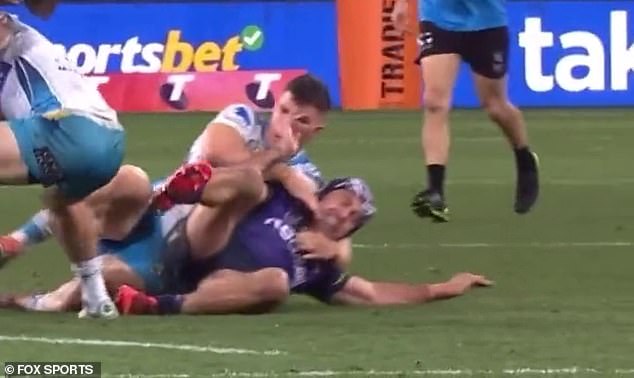 Hughes fell on the joint of his left shoulder, with the contact supposedly popping his shoulder in-and-out instantaneously

The Storm have struggled with squad injuries throughout the year, headlined by a gruesome season-ending knee injury to star fullback Ryan Papenhuyzen.

Flyers Reimis Smith and George Jennings were also rubbed out of the roster earlier this year with long term pectoral and knee injuries.

Maroons big man Christian Welch tore his achilles back in March which was Melbourne’s first spanner in the works.

The lack of experienced first graders in Melbourne’s wing department forced coach Bellamy to loan the services of Tigers veteran David Nofoaluma, who made his club debut in an 80-minute masterclass by impromptu no.1 Cameron Munster. 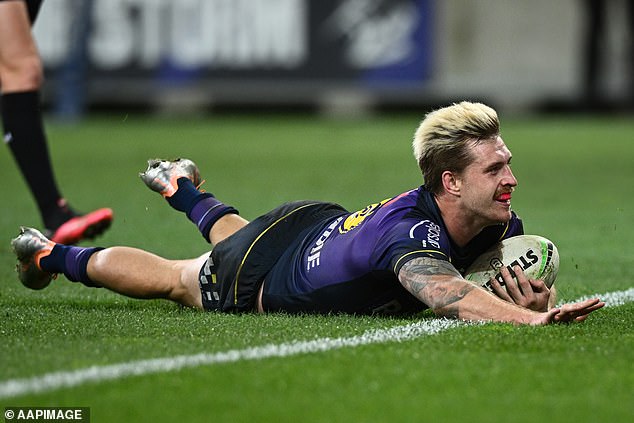 Cameron Munster put on a clinic at the back of Melbourne’s spine, scoring three tries and running for 252 metres

‘With Hughesy’s injury, we are going to need him (Munster) in the halves more than we do at fullback.’

Storm enforcer Brandon Smith could return to the sidelines yet again, as he was placed on report for an accidental ‘hip-drop’ tackle on Titans captain Tino Fa’asuamaleaui. 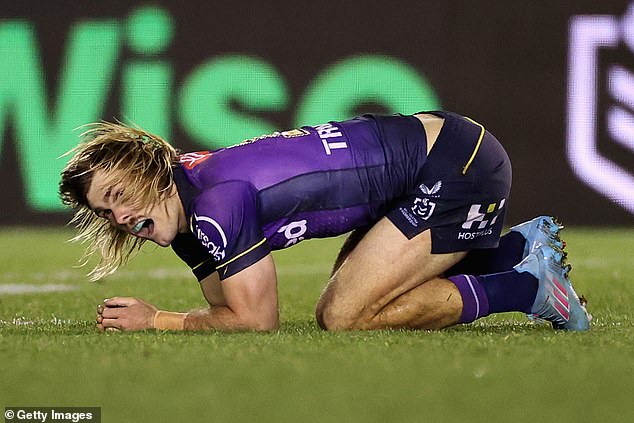 Ryan Papenhuyzen falls after crushing his knee in round 17 against the Sharks, which ruled him out for 2022

The recently suspended utility joined in on the two-man tackle, taking the legs of Fa’asuamaleaui, who twisted ugly when hitting the turf.

Bellamy pleaded with officials to rule Smith’s tackle in a different category to that of suspended Bronco Patrick Carrigan, who broke the leg of Tigers star Jackson Hastings last week.

Fullback Nick Meaney will return to Melbourne’s 17 next week, while Cooper Johns will most likely replace Hughes if scans reveal the worst.

Why Australia will work harder to build ties with Indonesia