CHINA sent 22 warplanes hurtling into Taiwan’s airspace as the giant nation continues to flex its military muscles in a message to the US.

The Communist Party sent the fighter jets briefly across the “median line” running down the Taiwan Strait on Thursday, according to the defend ministry in Taipei.

The Ministry of National Defense said “air defense missile systems” were deployed to track the jets and radio warnings were broadcast – it is understood Taiwan also scrambled fighter planes.

It is the latest brazen move by China as they attempt to send a message to both Taiwan and the US over senior American politician Nancy Pelosi’s visit to Taipei.

Beijing has essentially surrounded the island – which it regards as a breakaway province – with warplanes and warships as it announced six massive military exercises minutes after Pelosi landed on Tuesday. 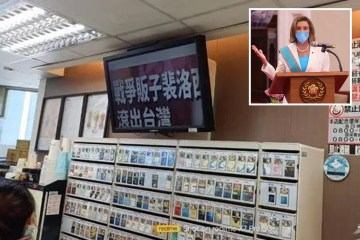