CARTEL gangsters have murdered at least 11 people in just 24 hours amid a horror killing spree in Mexico.

In just one day, drug gangs dumped severed heads and shot women – with one body found alongside a chilling note.

The city of Tijuana has seen a shocking surge in cartel violence – with 188 murders last month, bringing the total for 2022 to a staggering 1,098.

In just one day, 11 deaths were recorded – including a triple murder.

Cops found more than 30 shell cases, many of which were from a 9mm calibre pistols, and two cars damaged from gunfire at the scene, reports Zeta. 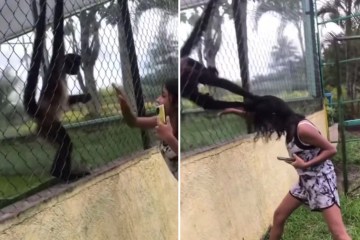 Witnesses claim the attackers fled in a truck.

Meanwhile, a man died in a fight outside of a bar and another man’s body was found on a hill close to a school.

Also on Sunday, a decapitated head was found alongside a handcuffed body, wrapped in blue tarp.

A warning from the killers was found scrawled in black ink on a piece of cardboard beside the corpse, it’s reported.

Another human head was also found the same day.

Within the early hours of Monday, four murders were then reported – including two women who were shot dead.

No arrests have been made following the murders.

It comes amid a spate of horror killings in the Mexican city.

Shocking statistics show that the city is averaging around seven murders per day, KRQE reports.

In another incident, the decapitated heads and charred corpses of 15 men and women were discovered.

Detectives revealed that a chilling note was found alongside a human head as they made a series of horror discoveries in the resort of Tijuana.

The heads belonging to a man and a woman were found in front of a residential complex in the El Mirador neighbourhood just after 5am local time on June 24, Zeta Tijuana reports.

Cops found a note that said: “This is for all the w****s who support the scourge in Playas, there is already a new administration: La Menchiza.”

A body that was half-buried was discovered on the same day and Gonzalo Chavarria Ramirez, 43, was found shot to death.

Kristin Cavallari Says Marriage to Jay Cutler Was 'Toxic,' Shares Why She Hopes He Remarries