VLADIMIR Putin’s alleged mistress has been hit with sanctions by the US, just weeks after it was reported that she is expecting the Russian president’s eighth child.

Alina Kabaeva, a former Olympic gymnast turned politician, was sanctioned over her “close relationship” to Putin, according to the US Treasury.

The 69-year-old Russian president has reportedly been dating Ms Kabaeva, who is 30 years his junior, for the past 13 years.

In an announcement, the Treasury Department said it was designating Kabaeva, who currently heads the pro-Kremlin National Media Group which promotes the war in Ukraine.

Several other wealthy Russians were also sanctioned by the Biden administration on Tuesday, in a further crackdown on Putin’s regime in the wake of the war in Ukraine. 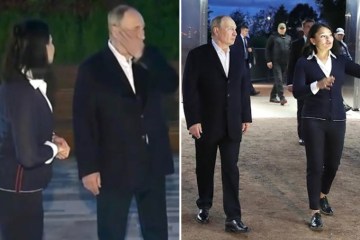 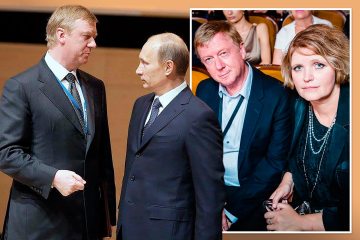 “The Treasury Department will use every tool at our disposal to make sure that Russian elites and the Kremlin’s enablers are held accountable for their complicity in a war that has cost countless lives,” she went on.

“Together with our allies, the United States will also continue to choke off revenue and equipment underpinning Russia’s unprovoked war in Ukraine.”

Up until now, the US has held off imposing sanctions on Kabaeva, who was sanctioned by the UK and EU earlier this year.

As a result of the move, any US property held by Kabaeva will be blocked.

Kremlin critics such as imprisoned Russian rights campaigner Alexey Navalny have long called for harsh sanctions on Kabaeva accusing her news outlet of taking the lead in portraying Western commentary on the invasion of Ukraine as a disinformation campaign.

For her part, Kabaeva has never confirmed her relationship with the Russian president.

The news comes just weeks after it was alleged Putin was having his eighth child with Kabaeva.

It was reported on the General SVR Telegram channel – said to be run by Kremlin insiders.

“We have already reported that Alina Kabaeva, the cohabitant of the President of Russia, is pregnant,” the post read.

“Yesterday the sex of the unborn child became known – this is a girl.”

According to the anonymous poster, the news “did not at all please the future father and president of Russia” who went on to say that he had “already enough children, and even more so daughters”.

As innocent people suffer from Russia’s illegal war of aggression, Putin’s allies have enriched themselves and funded opulent lifestyles

The former MP in President Putin’s United Russia party posed semi-nude for a men’s magazine in 2004 and was once dubbed “Russia’s most flexible woman”.

Putin allegedly met Kabaeva around this time, when he was married and she was in a relationship with a police officer.

He was pictured giving her a medal in 2001 before she was stripped of six of her world championship medals for doping.

Talk of romance between the pair was first hinted at in 2008 when a newspaper owned by Putin’s ex-KGB spy colleague Alexander Lebedev alleged a relationship.

Putin announced his divorce from Lyudmila, his first wife and the mother of his two adult children in 2013, and a spokesman denied he was having an affair, claiming he was too busy.

She was seen leading a patriotic gymnastics ballet festival accompanied by a uniformed military choir in Russia.

The controversial Z-symbol featured prominently in the events, which also included patriotic songs.

Kabaeva, who won Olympic medals at Sydney in 2000 and Athens in 2004, has allegedly been hiding in a Swiss chalet with the Russian president’s secret children.

In March, the lead singer of an Abba tribute group revealed they had played a private gig for Putin and his mistress at the Russian leader’s private compound.

Also named in the latest round of US sanctions is oligarch Andrey Grigoryevich Guryev, who owns the second-biggest mansion in London after Buckingham Palace – the 25-bedroom Witanhurst Estate.

His superyacht, the $120m Alfa Nero, was also identified as blocked property.

Paraglider Cheats Death, Saves Own Life One Second Before Impact In Terrifying Video