A MAN watched as his wife was crushed to death after she fell 100ft – and now the jump instructor has been jailed.

“My wife was crushed before my eyes,” said Alexander Tkachenko.

Yevgenia Leontyeva, 33, had been reluctant to make the leap from a hotel rooftop, even though she had done so before.

The mother-of-three let her female friend go first, and this ‘rope free-flying’ leap was successful, a court was told in Karaganda, Kazakhstan.

Witnesses said Yevgenia had appeared “afraid” – but they heard instructor Alexander Muznikas, 33, urging her to jump. 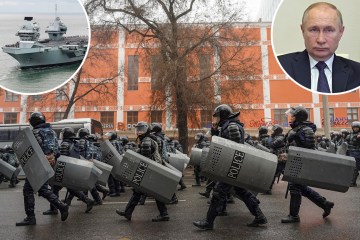 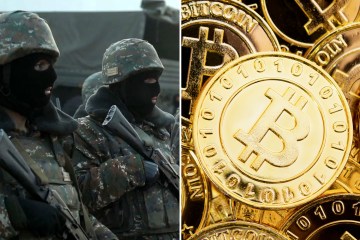 He told her: “It’s not the first time you’ve jumped.

“You know how to do it. Did I put a safety harness on you for nothing?”

She is then seen on a harrowing video leaping from the rooftop moments after husband Alexander Tkachenko told her: “I love you”.

She hit the ground, and rammed into an iron fence after a supporting rope was not properly secured on a tree, according to reports.

There were screams from onlookers on the roof and watchers below were seen rushing to her assistance after the appalling fall.

A cross-line to which her rope was attached – and which was supposed to break her fall leaving her suspended above the ground – failed to hold or was not even secured.

A man is seen falling to the ground as she crashes down, say reports.

He is believed to have been holding the safety line which should have been attached to the tree and he was floored by the force of her fall pulling on the unsecured rope.

The bereaved husband said: “I came to support my wife.

“Well, how not to support your beloved…

“My wife was crushed before my eyes. I was in shock and panic.

“It was clearly the employee’s fault.

“They did not coordinate their actions. The instructor didn’t look down to make sure the rope was tied. He just told her: ‘Jump!’

“I don’t wish this on anyone. He is guilty. He must serve time in jail…

“This, of course, will not return my spouse and mother of my children….”

He said: “After her fall, I knelt beside her. He [the instructor] came, but I don’t remember what happened then. She was still breathing.”

He is raising the three children aged eight, 11 and 12.

Before the tragic leap, Yevgenia and her friend had posted “Live it up” and “We’re going to fly”.

She suffered a serious skull fracture and brain injuries, and multiple right-sided fractures.

She was rushed to hospital but died as surgeons tried to save her.

Friend Anton Shevelev told the court he had demanded the instructor take off the harness because Yevgenia was “afraid to jump” and they would “go home”.

But Muznikas persuaded her to do the jump, he said.

The woman had three boys under 14, two of her own, and the son of a relative who had died.

Muznikas was convicted of offering services which did not meet safety rules and causing death by negligence.

The woman judge acknowledged that he had rushed the woman to hospital after her horrific fall.

He was sentenced to four years in a medium security jail.

His sentencing was shown on Kazakh TV.

'The Bachelorette': One of Rachel's Men Switches to Gabby's Side in Dramatic Preview