Known as ‘tanking,’ the practice of turning a mediocre team into a bad one for the purposes of improving draft positioning isn’t unheard of, although it has never been proven and punished by the NFL or any major US league.

It doesn’t involve individual players throwing games, but rather occurs at the front-office level, where executives favor cheaper, less-experienced rosters over squads of high-priced veterans. Typically, tanking teams save money on payroll. More importantly, they improve their chances of landing top, young talent in an upcoming draft, the order of which is determined by record with the worst teams picking first.

Proving tanking could be difficult because it comes with a built-in defense: Any team accused of doing it could theoretically claim to be taking a long-term approach to rebuilding its roster with an eye towards getting younger players more experience. 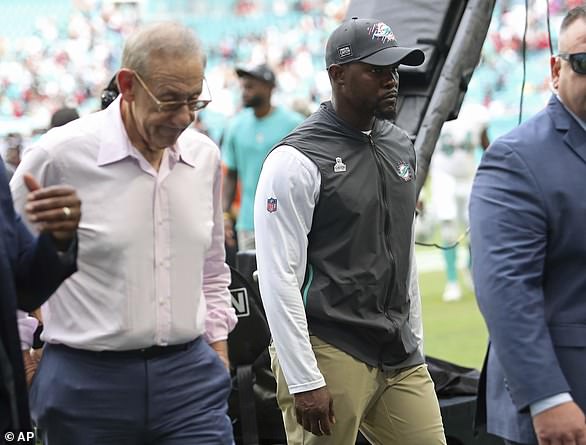 That was certainly the case for head coach Brian Flores with the young Dolphins in 2019, when they finished just 5-11 with a roster he inherited from a previous regime in Miami.

Flores was fired after the 2021 season, despite posting winning records in his final two years on the job. In February he filed a racial discrimination lawsuit against the NFL, claiming the league’s  hiring practices were biased against black coaching candidates. 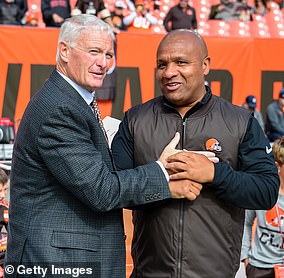 Former Cleveland coach Hue Jackson (right) implied on social media that he was paid to tank by Browns owner Jimmy Haslam (left), adding that he has proof. In a series of back-and-forth tweets regarding Flores’ lawsuit, Jackson posted that Haslam ‘was happy while we kept losing’

The lawsuit also included a claim that Dolphins owner Stephen Ross tried to bribe him $100,000 for every loss in his first year on the job.

Flores’s tanking allegation against Ross may have opened the NFL up to similar claims.

In Twitter exchange, Jackson wrote that Haslam ‘was happy while we kept losing.’ And later, Jackson posted, ‘Trust me, it was a good number!’

Both Ross and the Haslam’s Browns have denied the claims by Flores and Jackson. 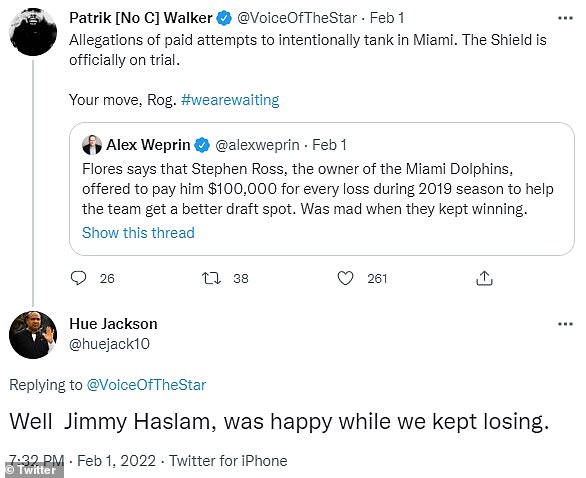 The difference between Flores’s and Jackson’s allegations is the $100,000 bribe that Ross allegedly offered his now-former coach in Miami.

As reported by Pro Football Talk’s Mike Florio, who is also a lawyer, the Sports Bribery Act ‘criminalizes such conduct’ when bribery is involved.

As Florio explained, the offer does not have to be accepted in order to convict. Flores has claimed he refused to lose games at Ross’s request.

According to the law, there is only liability if the accused ‘carries into effect’ a scheme or bribe. So an offer of $100,000 to lose a game could constitute a violation.

The NFL probed the claim as part of a two-fold investigation for Ross that resulted in a $1.5 million, but the league could not find enough evidence to punish the billionaire over the alleged $100,000 bribe offer. 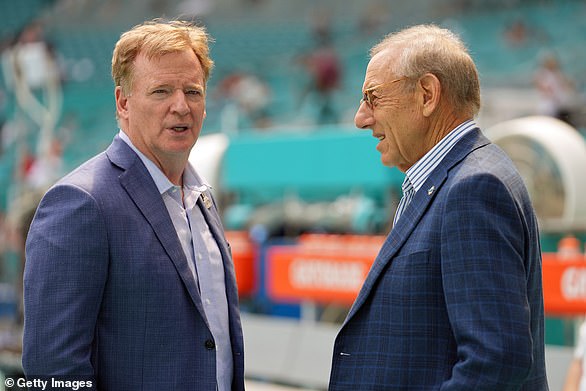 NFL Commissioner Roger Goodell speaks with Miami Dolphins owner Stephen Ross before the game against the Indianapolis Colts and the Miami Dolphins at Hard Rock Stadium on October 3, 2021