‘WE HAVE LIFT-OFF!’ AFL world left stunned by Giants star Toby Greene’s absurd mark of the year contender against Carlton

He’s a polarising figure, but GWS skipper Toby Greene left the entire AFL in complete awe after a stunning mark that had cult commentator Dwayne Russell cry out ‘WE HAVE LIFT OFF!’ in the Giants game against Carlton on Sunday afternoon.

Greene looked like he had springs instead of footy cleats on his feet, as teammate Callum Brown’s kick from defence went up the wing.

Starting five metres behind Carlton defender Lewis Young, Greene’s spectacular athleticism was on full display as he timed his run to perfection, leaping on the hapless defender’s shoulders.

He didn’t just sit on them either, he got further purchase and flew towards the Marvel Stadium roof, taking a spectacular grab before landing like a cat. 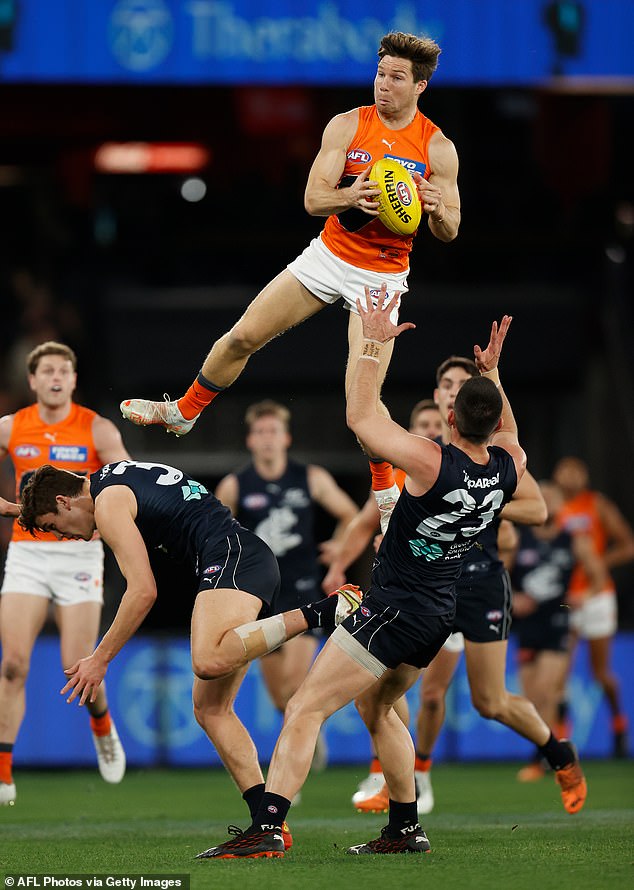 Russell called the moment perfectly as it happened, with the crowd audibly heard going ‘OOOHHHH’ after the Mark of the Year contender.

‘We have lift-off! The crowd is still stunned by that,’ he said on Fox Footy’s broadcast  as Greene wheeled around immediately, sending the ball inside 50.

The commentators gushed over Greene’s incredible grab, with Jason Dunstall, one of the AFL’s greatest forwards of all-time, saying ‘that’s massive … it’s a very good leap.’ 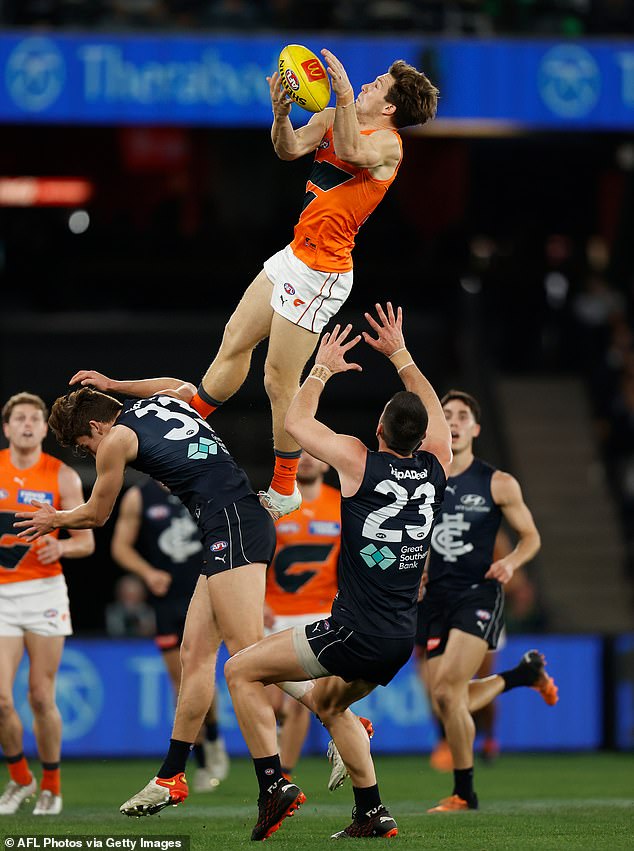 Toby Greene flies during the spectacular Mark of the Year contender

Dunstall, who is no stranger to a mark after taking 1779 in his 1254-goal career, said Greene’s phenomenal athleticism almost counted against him when it came to securing the AFL’s famed Mark of the Year.

‘He takes it in his hands not his chest. He needed to go horizontal and almost risk life and limb to make it look even more spectacular,’ Dunstall laughed at half time.

‘His skills have a different scope to everyone else in the competition.’ 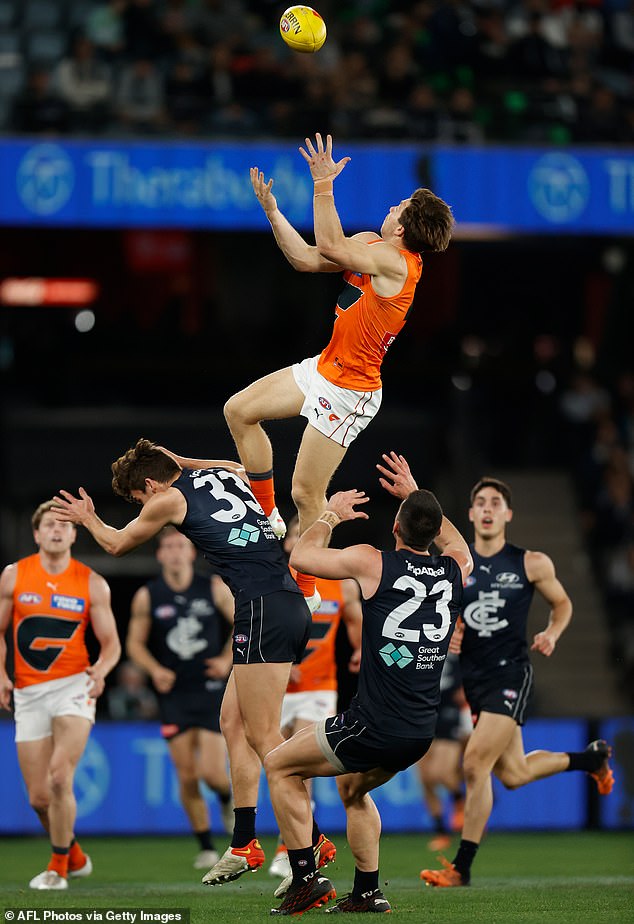 It was an exciting half for Greene, with Ex-Roos legend David King commenting it was typical for action to follow the all around the field.

‘It’s been a standard Toby Greene game. He’s given away a 50, had a snap at goal from the pack out of nowhere and had a mark of the year contender,’ he said during the broadcast.

Best on ground might already have been sewn up however – but it wasn’t Greene, who has had two goals to half time.

The Giants social media team put out a series of Greene-loving tweets, headlined by a reaction of ‘TOBY NEARLY HIT THE ROOF,’ much to the delight of their fans.

It has been spectacularly entertaining game thus far, with Carlton holding onto a 36-33 slender lead at half time.

The game has all the hallmarks of Toby Greene banging through a goal after the siren to give his side the win.

Quiz of the week: How did Boris Johnson sign off from PMQs?

Marvel's Phase 5: The Complete Schedule, From 'Quantumania' to 'Thunderbolts'