Josh Addo-Carr has bottle THROWN at him during Canterbury’s win over Titans, as Gold Coast skipper Tino Fa’asuamaleaui accuses Corey Waddell of eye-gouging

Unsavoury scenes on and off the field marred Canterbury’s 36-26 win over the Titans on Sunday, with Gold Coast skipper Tino Fa’asuamaleaui allegedly eye-gouged by Corey Waddell while Josh Addo-Carr had a bottle thrown at him.

Having placed Bulldogs five-eight Matt Burton in a headlock during the State of Origin brawl in Game 3, the Titans captain was met with a chorus of boos every time he touched the ball.

He stopped the game 23 minutes into the first half after smashing into the Bulldogs defence and asked referee Ben Cummins to investigate alleged eye contact, immediately singling out Waddell as the culprit. 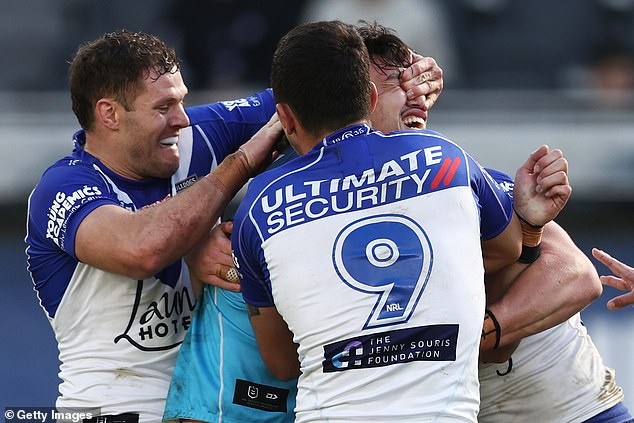 ‘He’s accusing the [player] of scraping across the eyes,’ Cummins told the video referee.

He then placed the Bulldogs forward on report

‘You’ve been around the face and it’s on report. Don’t go there,’ Cummins said.

Meanwhile, Josh Addo-Carr appeared to have a bottle thrown at him as he scored the Bulldogs’ fifth try of the afternoon to complete his hat-trick. The Canterbury flier intercepted a pass and was targeted by an object launched from the stands as he tore down the field to score. 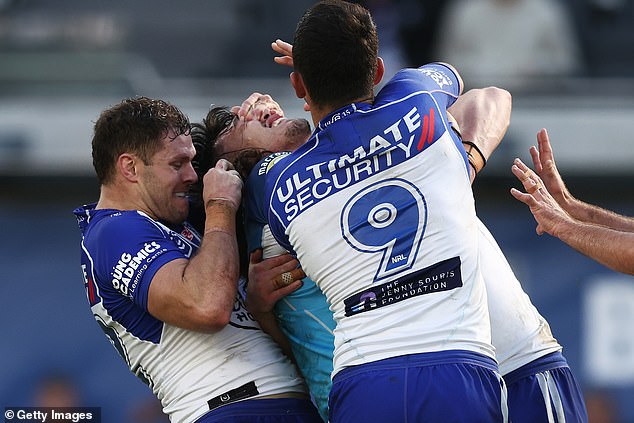 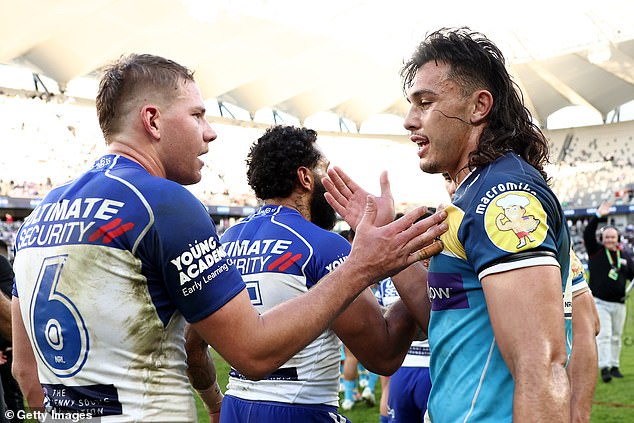 The object missed Addo-Carr, but the incident is surely going to be investigated by the NRL.

The superstar winger and Burton were the chief architects in Sunday’s win, which looks to have consigned Gold Coast to a battle with Wests Tigers to avoid the wooden spoon.

It has been a huge fall from grace for the Titans, who were one pass away from making the second week of the finals last year.

Gold Coast have won only three times in 2022 but need to win twice more and rely on other teams losing to finish any higher than 15th. 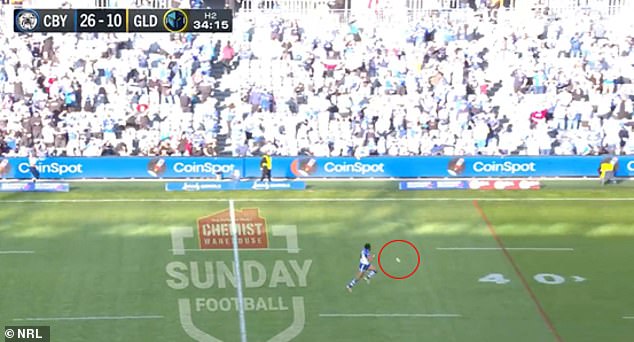 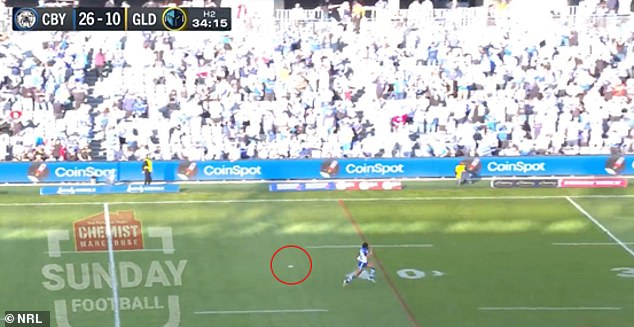 They have lost their past eight games to put coach Justin Holbrook’s future at the club under the microscope.

The Titans conceded 26 points in the first half and could have been further behind had the bunker not denied three Bulldog tries.

Canterbury found it easy to break through the Titans’ brittle edges and capitalise; three of their four first-half tries came directly after line-breaks down the flanks and all three involved at least Burton or Addo-Carr.

In the most memorable, Addo-Carr flirted with the off-side rule by darting from the Bulldogs’ goal line, grabbing an intercept and racing 95 metres to score. 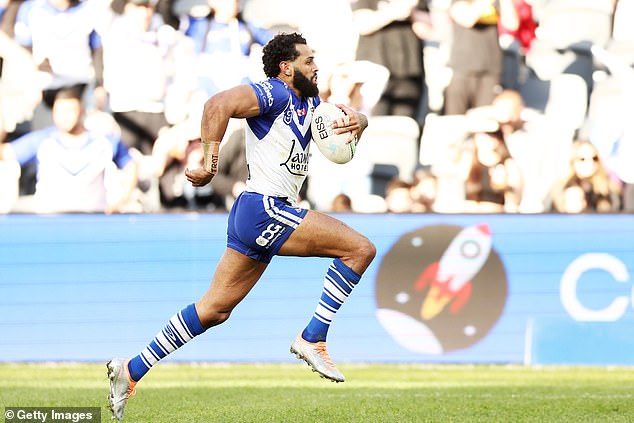 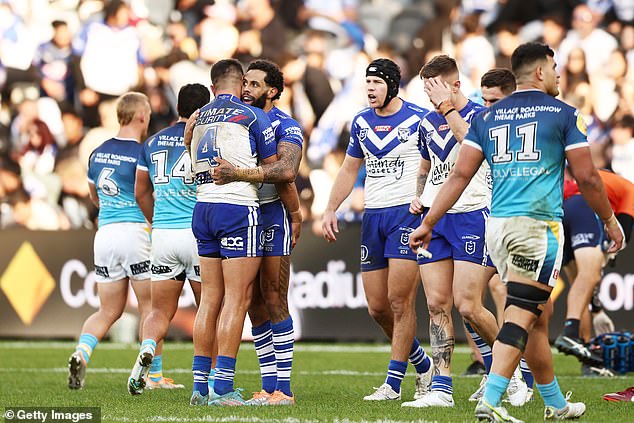 The win lifted Canterbury up to 12th on the NRL ladder, while the Titans remained 15th 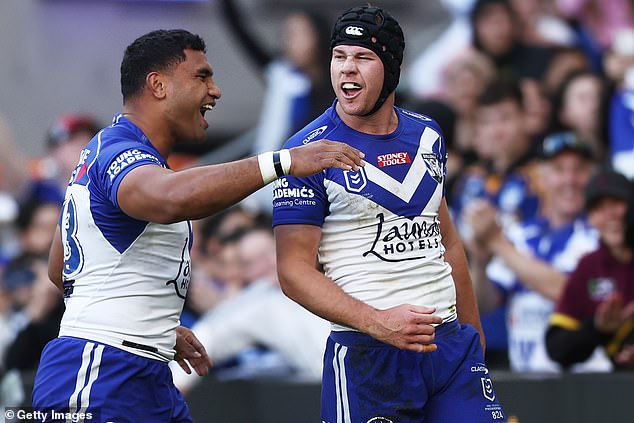 The Titans threatened to mount a second-half comeback and looked the more dangerous side from close range.

But Addo-Carr produced a second intercept try and re-hashed his combination with Burton down the left edge to keep the Titans at bay. 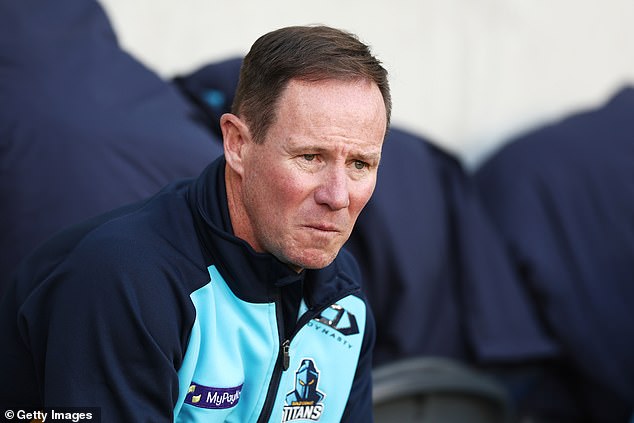 Exciting young Titans fullback Jayden Campbell made his first appearance since tearing his hamstring in round 13 but played limited minutes at the request of club medical staff.

He looked confident running the ball after coming on in the 48th minute.

The win lifted the Bulldogs to 12th on the NRL ladder, while the Titans remained 15th.