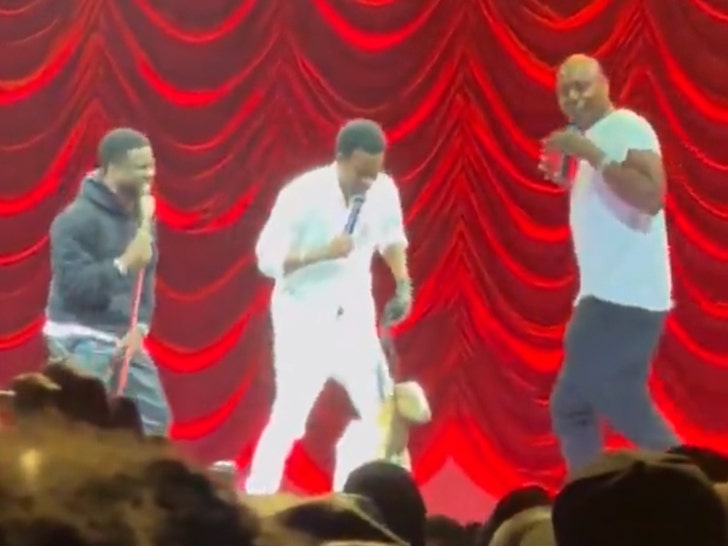 Dave Chappelle hasn’t opened for anyone in years, but that changed Saturday night when he warmed up the crowd — yeah, more like supercharged the crowd — for Chris Rock and Kevin Hart.

#ChrisRock , #KevinHart , and #DaveChappelle on the same stage at MSG was nothing short of legendary. Honored to have witnessed 🙏🏼 (more footage on my Instagram @Callistusss ) pic.twitter.com/4VHDXJGiiW

It was a huge surprise to all over at Madison Square Garden in NYC … Dave just came out on stage, cig in hand with no intro. He walked out to Radiohead’s “Karma Police” and then talked extensively about cancel culture … and the crowd ate it up.

There was an oblique reference to the venue that canceled his performance in Minneapolis a few days ago after protests erupted. Dave said, “Had to sneak my way in here,” adding, “despite what you may have read about in the news, I’m okay, and I appreciate the support.”

He wasn’t just up on stage for a few minutes … it was really an opening set, which lasted more than 20 minutes. Dave talked about getting tackled at the Hollywood bowl, suggesting his bodyguards were slow on the uptake because they were wearing dress shoes … grousing they were “sliding all over the place like at a bowling alley.”

He made it clear … he was pissed at news outlets that called the attack “alleged” … it was, after all, captured on video.

As for his attacker’s punishment, Dave said he hopes the guy gets monkeypox behind bars, adding, “not that he should die, but his ass should itch for four to six weeks.”

When it was Chris Rock and Kevin Hart’s turn, they killed for an hour, both referencing Will Smith several times. Chris also mocked cancel culture, saying, “Anyone who says words hurt has never been punched in the face.”

The show ended with all 3 on stage, and there was a contest of sorts over who was the G.O.A.T. Kevin said Chris was it, and Dave chimed in … “This is the worst night of this goat’s life.”