In controversial scenes at Marvel Stadium, Tigers defender Ben Miller was subbed for teammate Maurice Rioli Jnr in the fourth quarter – and the small forward made an immediate impact with two disposals and two tackles.

The polarising medical sub rule was introduced by the AFL ahead of round one last year – and has been widely panned since.

It sees a player able to enter the fray after club doctors have assessed an injured or concussed player as ‘medically unfit’ to continue in the match.

To be eligible for a medical substitution, the club doctor must decide that an injured player will be unable to play a game in the next 12 days. 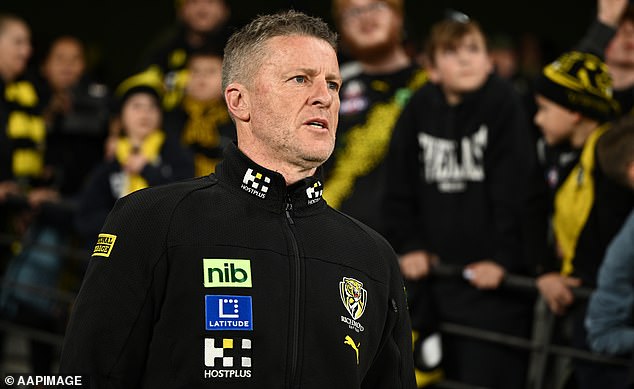 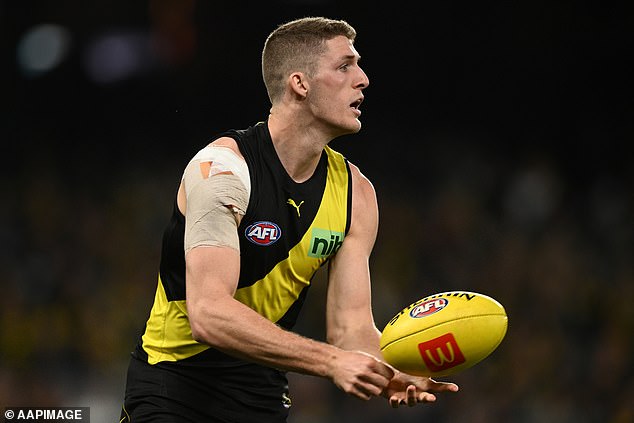 In controversial scenes at Marvel Stadium, Tigers defender Ben Miller was subbed for teammate Maurice Rioli Jnr in the fourth quarter as a medical sub

It remains to be seen if Miller will line up next weekend versus Brisbane at the MCG.

AFL reporter Sam Edmund lamented the lack of clarity on the contentious issue.

‘We’ve got the continuation of what might be the most farcical rule of the year. Forget the high tackle, it’s the medical sub rule,’ he said on SEN radio.

‘We were told there would be strict medical governance that would protect the integrity of it, now after six rounds we had something like a dozen players who were subbed off and played the very next week. 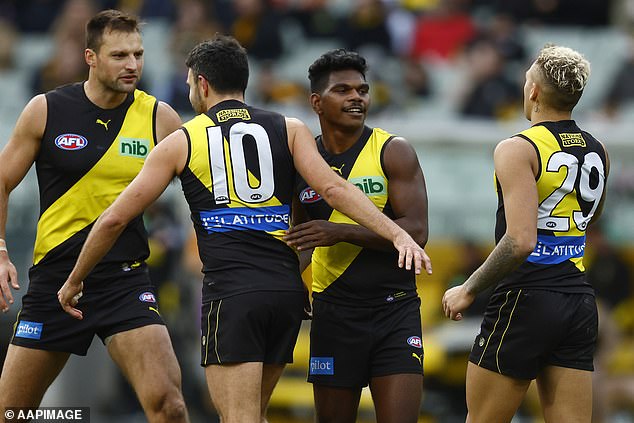 Medical sub rule in the #AFL is a joke. Hardwick just said they subbed their played off with cramp. So doctor signed off that he would miss 12 days due to cramp? Just an accepted rort at this point.

‘There’s always going to be suspicion around these changes because they seem so tactical in terms of the timing of it,’ he told Channel 7.

‘It’s why you’d love the AFL to make a decision cut and dried, they either miss the next week or they can be subbed whenever they want because there’s always suspicion about it.’

Richmond doctors will be required to provide the AFL with a medical certificate to prove Miller sustained a legitmiate injury.

If found to have broken the medical substitute rule, the club could be sanctioned.

In what was a thrilling contest, Tigers youngster Noah Cumberland could have been the hero when he took a mark on the 50m line with seconds remaining.

But the 21-year-old showed his inexperience by playing on as the siren sounded, consigning the two teams to split the four competition points on offer.

Shinzo Abe killing: Why a religious group has been put in the spotlight

Stars and Scars -- You Be the Judge