After the optimism and euphoria of the tournament’s start, we are fully into the realm of the plucky Brit now. As Julie Niemeier gave her happy, triumphant, interview, Heather Watson signed autographs with an equally big smile on her face.

She had just lost in straight sets, 6-2, 6-4 to the world number 97, a player that had never progressed beyond the first round of any Grand Slam tournament before this Wimbledon.

It was the previous Slam when Niemeier at last broke out of the qualifiers and reached round one of the French Open, losing to Sloane Stephens. So it is not as if Watson was eliminated by a top seed at her peak. 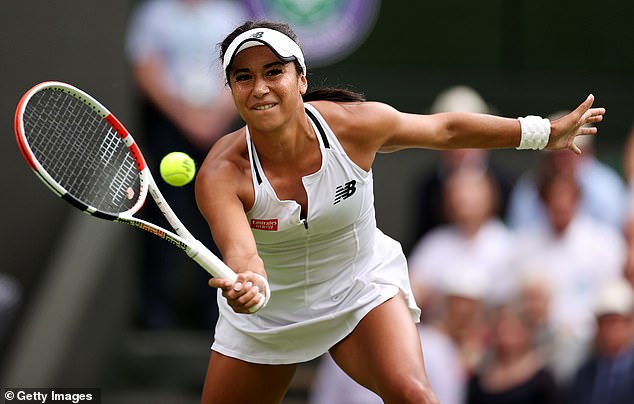 Niemeier would have been as delighted to be playing in round four on Centre Court as she was. She would have considered it an even match, with Watson perhaps having home advantage.

The pair had followed on from the pageantry of the centenary celebrations with its parade of legends, champions and Tim Henman. It was a wonderful stage for two players with a combined singles ranking of 218.

Certainly, after the win, Niemeier sounded a little shocked at its ease. She certainly didn’t give the impression of an opponent wearing a cloak of invincibility.

‘I was nervous,’ she said. ‘I just tried to focus on my game and play point by point. It went well. I’m super proud of myself for performing without missing that many balls. It was pretty good so I’m really happy.

‘I didn’t want to watch the show before the match because of all the great players. This is a special place, one of the biggest courts on tour.’

Against a stronger opponent, Niemeier might have been overawed – but Watson was never going to test her like that. If she won a point, she invariably gave it back softly a shot or so later.

She lacked rhythm, she lacked control. And at the end she just looked pleased to have finally made it to Centre Court at the age of 30. That’s plucky Brit syndrome. The feeling of achievement at having reached an early round, or minor milestone. The pat on the back for a run that, in many countries, would represent a footnote, and no more.

It affects audiences, too. Centre Court appeared delighted with a break point saved or a service held. They completely bought into the idea that to have a British presence in what is basically Wimbledon’s week two, was an achievement in itself. Not that they should be throwing rotten tomatoes. Watson is 121 in the world so this was better than expected.

Yet it is disturbing how quickly the Wimbledon faithful have gone from following Andy Murray, who never settled and never gave in, even when outgunned by his contemporaries, and happily accepting the parade of plucky Brits. 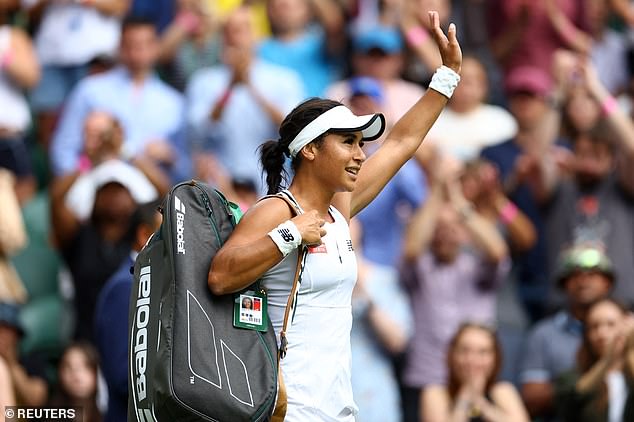 This was tennis of decades past, when Wimbledon was an international tennis tournament that took place, largely, without the hosts. The British made it through the first few days, pluckily, before departing in overblown defeat the moment the competition got serious, or sometimes before.

The rest of the week then played out with the hosts as spectators. It was grim, really. There are entire generations whose youthful memories of Wimbledon do not contain a single British player, save Virginia Wade.

Henman challenged that, even if in the parade of champions his presence next to Rod Laver, Bjorn Borg or Roger Federer seemed rather incongruous. That was Britain’s idea of a tennis hero: a man who never reached the final of a Grand Slam. Another plucky Brit, but glorified. And Murray was plucky, too, of course. But he was more. He didn’t settle for pluck. He kept striving until he won, and won big.

And Watson isn’t as good at tennis as Murray. She isn’t even the British number one. It would be unfair to heap the woes of domestic tennis on her shoulders. Even so, there was an opportunity here and it was missed.

Niemeier played a very good game but it was helped by unforced errors and weak tennis from Watson. She was lobbed almost at will, frequently beaten at the net, and could not handle Niemeier’s power at all. Yet still Centre Court appeared delighted, as if thankful there was going to be no interruption to a mid-afternoon visit to the champagne tent.

The whole mood felt retro – with even Sir Cliff Richard emerging during the pre-match celebrations to sing Summer Holiday. Remember when that was a Wimbledon highlight – before Murray turned up and reminded us all what we were meant to be here for.

‘When I light it up I can beat anyone on my day,’ insisted Watson, although she hasn’t, not in the Slams. ‘I’m disappointed and deflated. I’ll look back and be proud of myself over this week. I knew her serve was big but it was bigger and better today. Everybody’s journey is different.

‘I’ll keep plugging away, I believe in my game, I broke a barrier here and I can do so again. Age is a number, I don’t think of it anymore. I feel I didn’t do myself justice today. I saw today as a big opportunity and thought I’d come through it. I don’t take this for granted. I always put a lot of my pressure on myself.’ 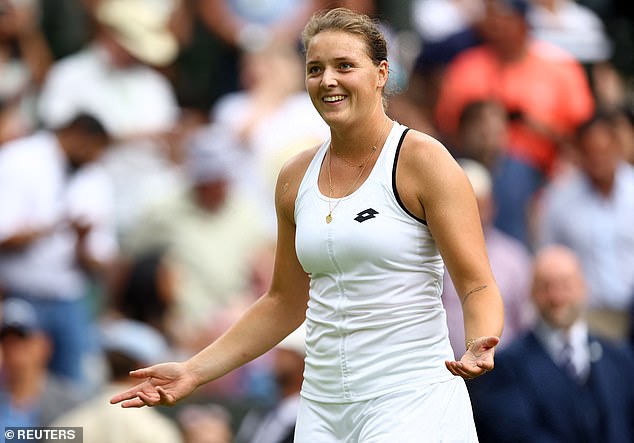 But is that strictly true? Watson has earnings of over £5million from tennis, and in excess of £350,000 this season, before Wimbledon. She’s a handy doubles player, entered here with Harriet Dart, and can live very comfortably from the game with the public support of the easily satisfied.

There is a midway point between dismantling Wembley in fury and missing out on a quarter-finals place while cheerfully signing autographs. Niemeier was good; but Watson helped make her so.

‘She played flawless tennis in the first set,’ Watson added. I felt I was not on the front foot like my other matches. It was like I was playing a serve-bot, more men’s tennis than women’s. The rallies weren’t long at all. She didn’t allow me to get into it. I had no rhythm. She just didn’t let up.’

And Watson did. Never mind, the crowd say, we love you anyway. Very plucky. Now, what’s for tea?