‘Why is there any pressure? I’m still 19… It’s a joke’: Emma Raducanu dismisses scrutiny on her and insists ‘I’m a Slam champion’ in a staunch defence of her second-round Wimbledon exit, stressing she’s proud of winning a match after injury-hit year

Emma Raducanu shrugged off talk of pressure on her shoulders as ‘a joke’ and insisted reaching the second round of Wimbledon was something to be proud of.

Living up to the hype has proved impossible for the 19-year-old so far and, a year after rocketing to stardom with a run to the fourth round and then achieving the unthinkable in New York, she slipped to a meek 6-3 6-3 loss to France’s Caroline Garcia on Centre Court.

It was undoubtedly an anti-climax but hardly surprising given the results Raducanu has had since her US Open triumph and, most significantly, the side strain that severely disrupted her preparations. 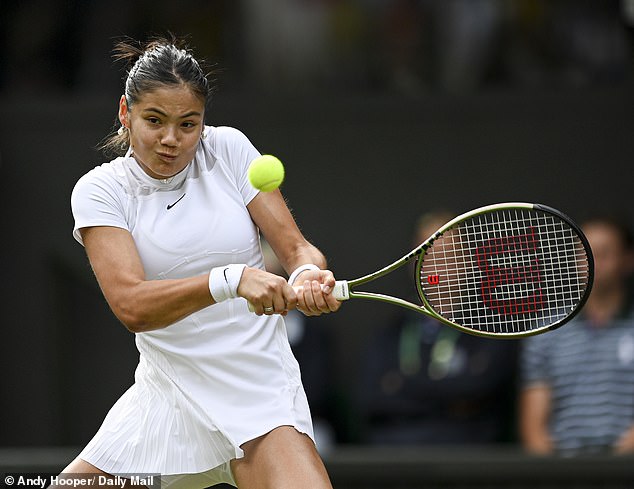 ‘I didn’t feel anything out there,’ the British number one said of the injury. ‘I declared myself fully fit when I walked out onto the court on the first day.

‘But I’ve played seven hours of tennis in a month. To even compete with these girls at this level and win a round I think is a pretty good achievement.

‘Obviously it’s tough to lose any match but I think that Caroline played a great match. She is a great player. I struggled to find a way through her today.

‘But it’s OK because, coming into this, I didn’t really have many expectations of myself. Playing on Centre Court again was a really positive experience for me.’

Raducanu’s mantra this tournament has very much been that, whatever she achieved last year, she remains a relative novice with everything to gain simply from experiencing these environments. 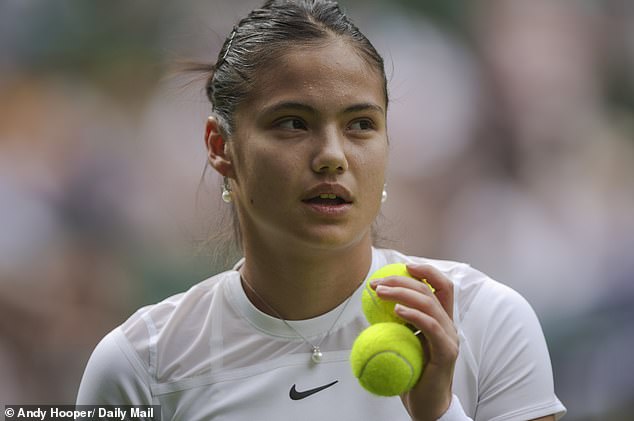 She has handled questions about her status in the game with patience but allowed exasperation to show when the issue of pressure was again raised.

‘Yes, I have had attention. But I’m a slam champion, so no one’s going to take that away from me. If anything, the pressure is on those who haven’t done that.’

Hopes for her second-round match were boosted by Raducanu having won her only previous clash against Garcia in Indian Wells in March.

The Frenchwoman is ranked down at 55 but, having been tipped as a future world number one by Andy Murray as a teenager, has been as high as number four.

She struggled in the first round against Britain’s Yuriko Miyazaki but had arrived late from Germany, where she won a tournament on grass at the weekend.

Garcia had promised to be aggressive and she was as good as her word, stepping into the court on Raducanu’s second serve in particular and looking to take control with her backhand. 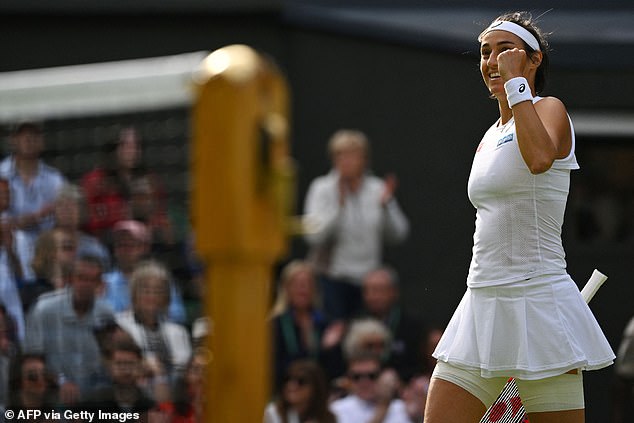 Blustery conditions caused issues for both players but it was Garcia who was able to hit through them and, although Raducanu battled as hard as she could to stay in contention, she was ultimately outplayed.

‘I think it was first-strike tennis,’ said Raducanu. ‘She served really well today. I didn’t really have any looks, I felt, many second serves. Even when I did, they were tricky ones with the wind holding them up. I just didn’t have enough ball speed today.’

Disappointment must be tempered by the knowledge Raducanu has many more chances to challenge for the latter stages at Wimbledon in the future, and her thoughts will now turn to the build-up to the defence of her title in New York later in the summer. 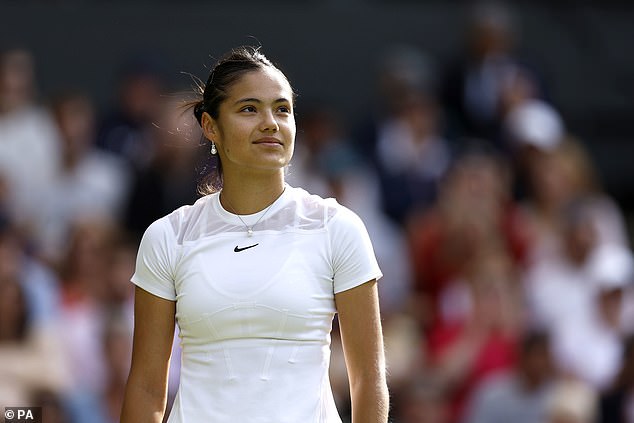 That will begin at the Citi Open in Washington at the beginning of August and should also take in the big WTA Tour events in Toronto and Cincinnati – if Raducanu can avoid any more physical niggles.

The teenager said: ‘I think that since the French Open the biggest thing has been my time on court has been extremely minimal. That’s obviously something I’m going to be focusing on, getting my body ready, just play tennis basically.

‘Going back to New York, it’s going to be cool because I have got a lot of experiences playing on big courts, playing with people in the stadium, playing with the spotlight on you.

‘I don’t mind that. For me, everything is learning. I’m embracing every single moment that is thrown at me.’