England’s heroes celebrated in style and into the night after an incredible win in the second Test over New Zealand at Trent Bridge.

The Three Lions secured an astonishing victory after they chased down a fourth innings target of 299 set by the Kiwis, in just 50 overs, to seal their first Test series victory in 18 months.

The final session was a swashbuckling affair with Jonny Bairstow crunching a 77-ball century and skipper Ben Stokes smashing 75 off 70 balls, to see England home. 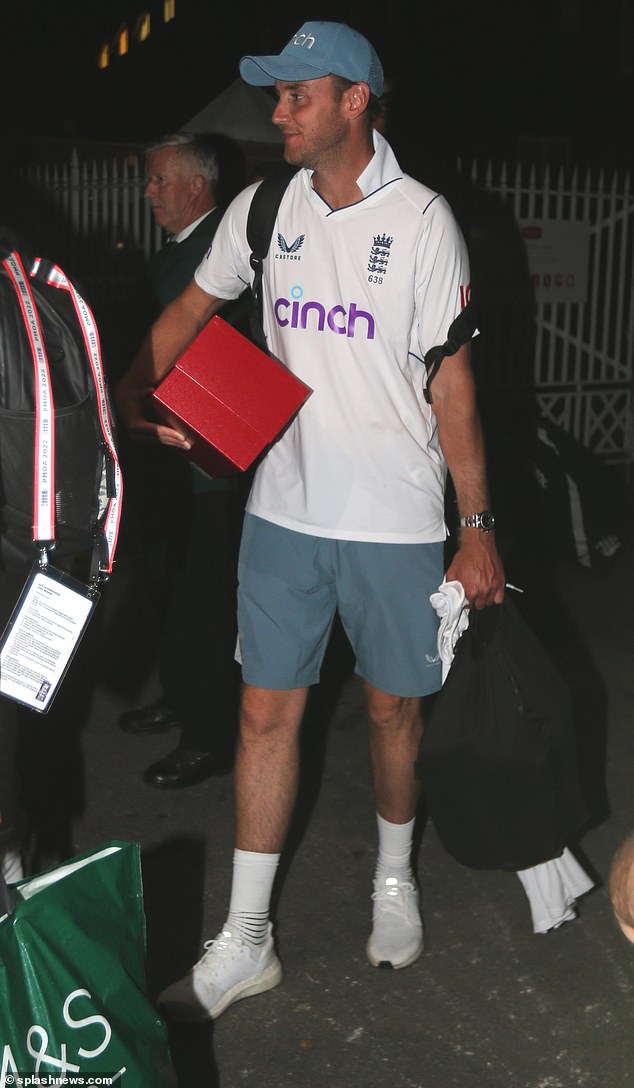 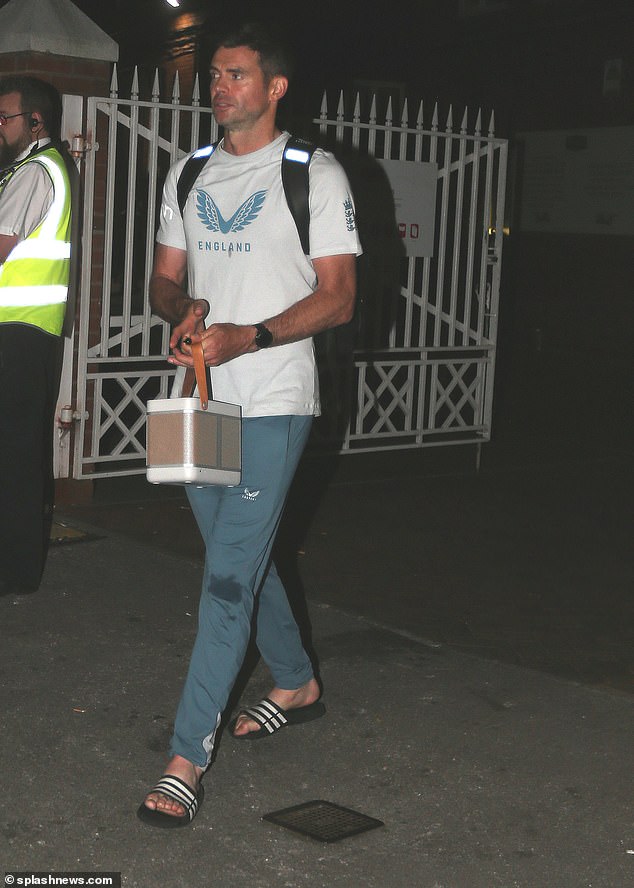 Bowling partner James Anderson, who took five wickets in the match, follows him out 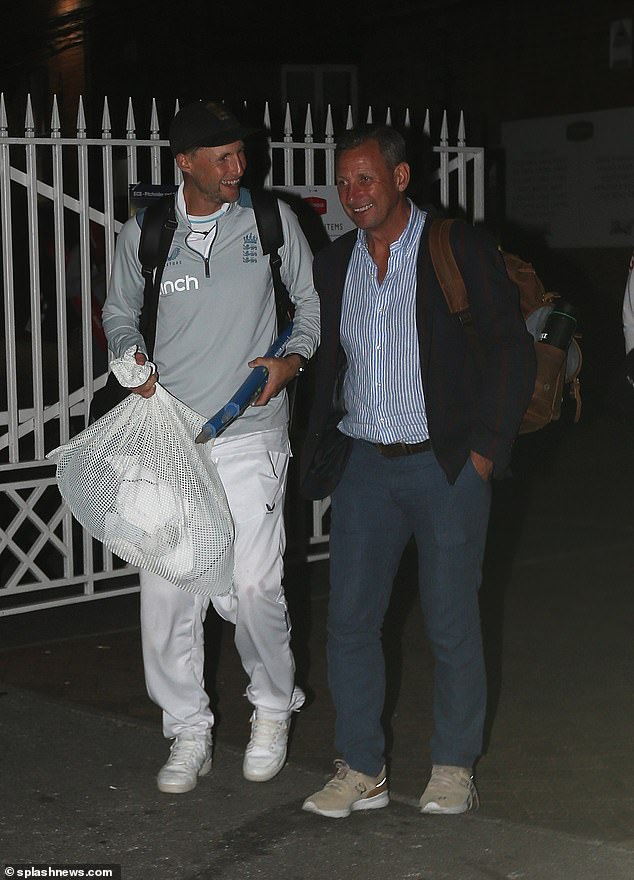 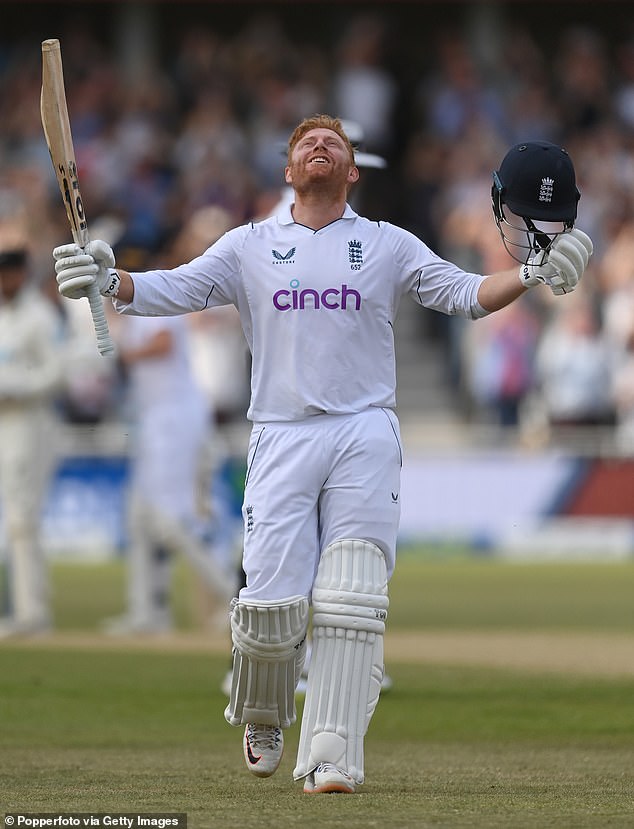 There were wild celebrations at the end, with a full house of 15,000 at Trent Bridge creating a carnival atmosphere.

‘A very special Test match win at a very special ground,’ fast bowler Stuart Broad, who took five wickets in the match and is a Notts native, reflected on Instagram.

‘Love everything about Trent Bridge,’ Broad said of his home ground. ‘Can’t quite believe how much cricket we seemed to fit into 5 days there!

‘The match had everything but I will always remember it for @jbairstow21 brutal innings after tea. What an enjoyable experience watching that with a full house in. Loved it.’ 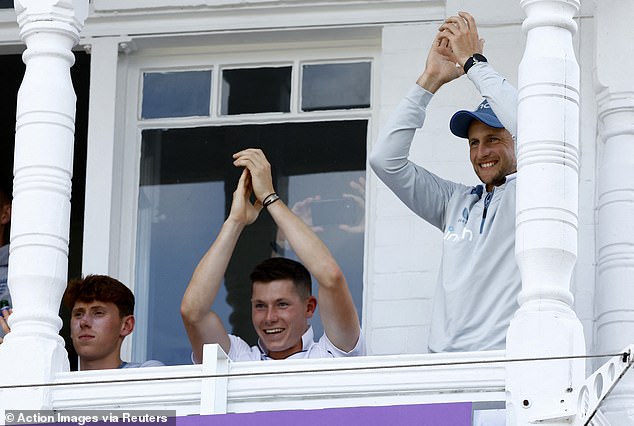 England’s Joe Root and Matthew Potts led the celebrations on the balcony, applauding the man of match Jonny Bairstow

Foakes still looking 10/10 after a heavy night. Root and Lees propping up the counter. Anderson getting excited for his order to be ready. Pope ordering far too much food. Crawley looking round at lads scrapping thinking “is this what the North is like?”

It was a victory worth celebrating and the England lads rightly did just that.

The after-party started in the dressing room, where England players were initially joined by jubilant family members, and where they stayed locked in and sharing beers for hours after the close of play.

As the sun slipped down behind the William Clarke Stand and the famous Trent Bridge Inn beyond it, the team returned to the field of their triumph and sipped wine on the outfield, while drinking in the sweet success of victory until after after 11pm.

Stuart Broad was snapped enjoying a glass of red wine with a cigar, in an image that appeared on former interim head coach, Paul Collingwood’s Instagram. Collingwood himself was pictured with a bottle of peroni and celebratory smoke. 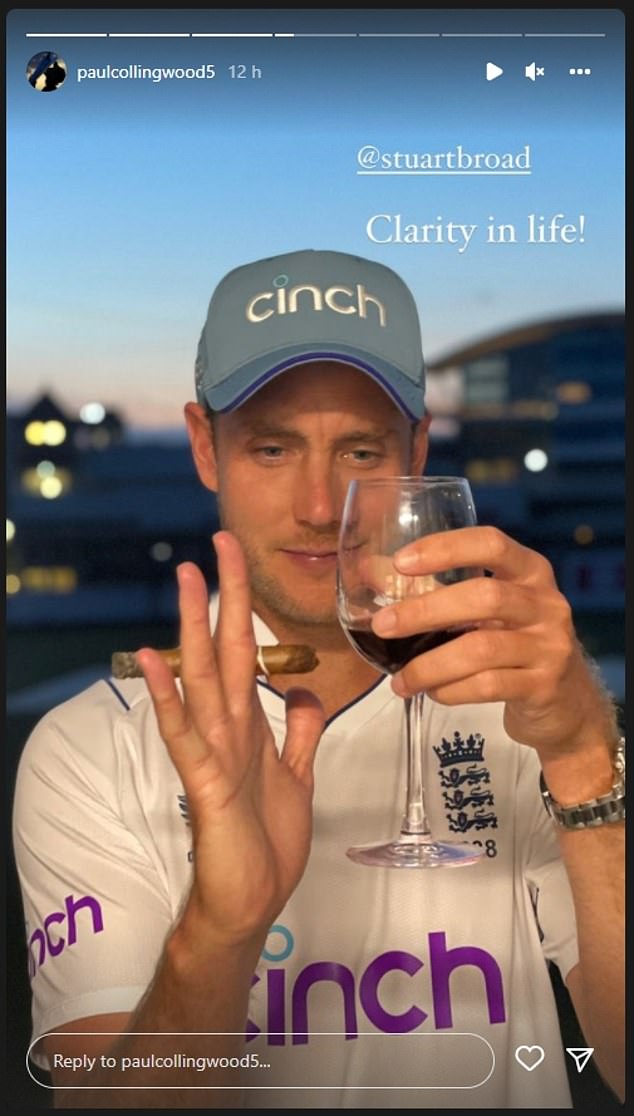 The team were pictured leaving the famous old ground at 11.15pm. None looked worse for wear, but they all appeared deeply satisfied with five days of hard work.

Following their celebrations at the ground, the players refuelled at a city-centre take-away and then continued the good-natured revelry in the gardens of their exclusive £500-a-night hotel until the small hours.

Sportsmail understands Captain Ben Stokes, as well as new coach, Brendon McCullum, who has encouraged the players to believe in their ability to win any game, addressed the team.

His positivity was on show in Nottingham after New Zealand posted a first innings total of 553. England almost matched it, scoring 539, before bowling New Zealand out for 284 to set up an extraordinary finale.

But while the players enjoyed their success and marked a memorable win, the celebrations were low key in comparison to previous English teams. 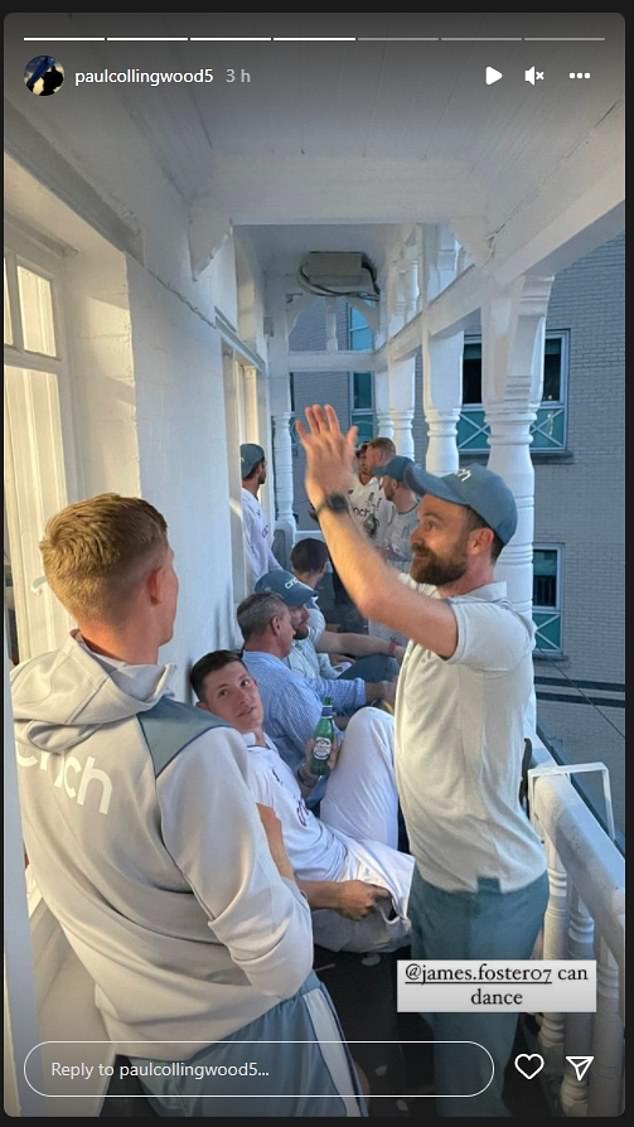 Michael Vaughan’s Ashes winning side of 2005 set the benchmark with an all-night bender after England beat Australia in a series for the first time since 1987 when they secured a draw in the final Test at The Oval.

In the days that followed all-rounder Andrew Flintoff and star-batter Kevin Pietersen led the memorable celebrations.

During the dressing room session, senior players followed the skipper and coach and had their say on proceedings with an emphasis on the full five days play, not just the pyrotechnics that broke Kiwi hearts – and thrilled the crowds – after teain the last session.

The team was seen leaving Trent Bridge late into the night, before making the short journey across the River Trent and into the city. 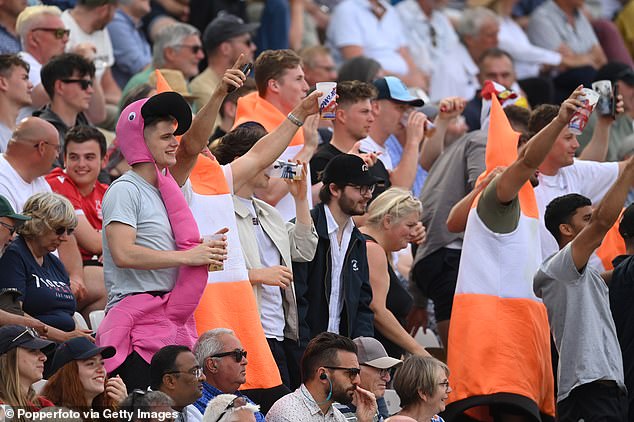 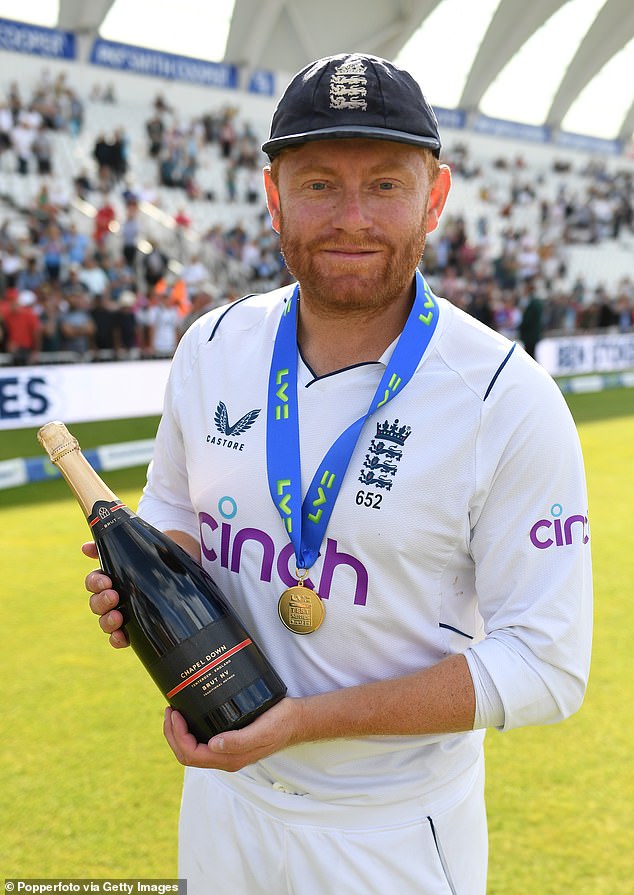 There they were spotted ordering fast food at a favourite late-night takeaway, the Mega Munch kebab shop. Even elite athletes need a treat now and again.

‘What better way to celebrate a famous Test win than with a big dirty takeaway?’ wrote Danny Senior, a sports journalism graduate, on Twitter alongside a video of the players, led by the world’s in form batsman, Joe Root, at the front of the queue.

‘Foakes still looking 10/10 after a heavy night. Root and Lees propping up the counter. Anderson getting excited for his order to be ready,’ added Senior.

‘Pope ordering far too much food. Crawley looking round at lads scrapping thinking ‘is this what the North is like?’

After dealing with their ‘munchies’, it was a short walk back to the team hotel. England routinely stay at Hart’s, a boutique establishment built on the old ramparts of the city’s castle, when playing at Trent Bridge.

Hart’s is known locally for its fine restaurant, where you can pick up a chargrilled rump steak for £24. A room at the four-star hotel costs between £200 and £500.

Although it appears the team did not go straight to their bedrooms. They could be heard in the secluded hotel gardens until the small hours enjoying a stunning and well-deserved win.

China and Russia are building bridges. The symbolism is intentional