THIS is the epic moment a mother sloth bear got into a fight with a male tiger in an Indian wildlife reserve.

The dramatic footage begins as the tiger chasing off a sloth bear that was headed with her cub toward a water hole.

But the protective mother bear then charges the big cat and a fierce battle ensues, while the cub roared in distress.

At one point, the tiger even tries to pin down the bear, before the sloth bear tries to escape the feline’s grip.

By this stage, the cub has run away.

The footage goes on to show a tense minute when the strong animals both charge at each other to assert their dominance. 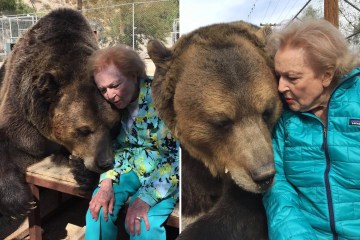 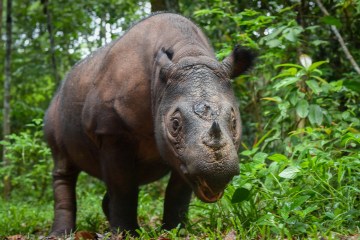 The video was recorded by a naturalist at an ecotourism lodge in Maharashtra, in the Tadoba National Park in the centre of India.

Incredibly, the man who managed to film the terrifying fight, Akshay Kumar, said that he recognised the well-known 7-year-old dominant male named Matkasur.

According to Kumar, Matkasur had marked the water hole as his territory.

The bear’s reaction and attack were “motherly instinct”, Kumar told NDTV, as he added the sloth bear is not known to be territorial.

“The tiger attacked the bear [for] more than five minutes. It went after the sloth bear but she kept charging in order to protect her cub,” he explained.

“It went on for 15 minutes. The tiger was roaring. It was a severe fight.”

Both animals were injured in the violent face-off on 8 June during an afternoon safari.

“As you can see in the video, the sloth bear was so exhausted. They can’t outrun tigers.”

The naturalist said that the mum bear’s thick black fur had saved her from a worse outcome.

The Bengal Tiger population is on the rise – their number has gone up by a third over a four-year period (2014-2018) amid efforts to protect the endangered species.

There are currently an estimated 2,967 Royal Bengal tigers in India.

Adult sloth bears, meanwhile, usually weigh 220 lbs, though they can reach up to 300 lbs for a body length of 5-6 ft.

Although females are smaller than male sloth bears, they have more shaggy, thick fur between the shoulders.