BEACHGOERS and surfers have been warned huge sharks are stalking swimmers off a famous beach in Queensland as the annual migration kicks off after an attack over the weekend.

A former champion surfer shared the dramatic moment his nephew survived a shark attack off Frenchman’s Beach, in the southeast of the Australian state.

Long-time North Stradbroke Island local Russell Specht took to social media on Monday morning to share the story and warn tourists of the hidden danger of the whale migration.

Specht, who posted an aerial photo of the monster shark, said his lifeguard nephew Logan had a “really close call” while surfing the popular break.

“He had to put the board between him and a big white … he thought it was over,” he said in his Istagma post.

“I had to post something as too many tourists just have no idea.” 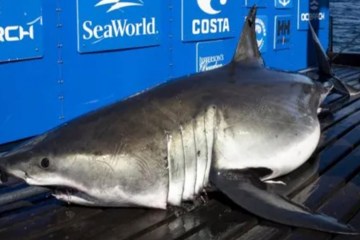 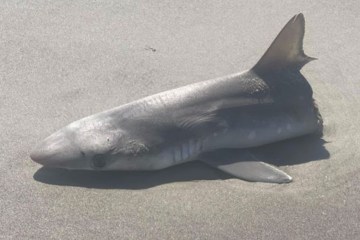 The surfer added: “So many crew locals and tourists have no idea of the [amount of] whites following the whales and the mullet schools up and down [the] coast this time of year.”

This warning came after a huge great white menaced surfers at Frenchman’s Beach at the weekend.

In the social post, Specht recalled surfing Straddie, another spot on North Stradbroke Island, in the 1970s when a fellow surfer was attacked by a shark.

Specht remembered how his mate had his leg bitten off by the predatory shark: “I will never forget the carnage of it.”

Between June and August every year, whales typically move up to Australia’s East Coast’s warmer waters to mate, bringing in their wake large numbers of killer sharks.

In March, Aussie snapper Sean Scott left the internet stunned when he shared the chilling drone footage of a shark prowling off Australia’s west coast before vanishing in a flash.

This came a year after a huge 900lb tiger shark was reeled in by a group of Sydney fishermen after a 45-minute grapple with the ferocious beast.

Captain Paul Barning and the crew of the Dark Horse caught the deadly shark off the coast of Sydney, then brought it to shore to be weighed at Port Hacking in Sydney’s Sutherland Shire.

The sharks can grow up to 7.62 metres long and sometimes weigh more than 800kgs.

There were 18 shark attacks in Australia in 2021 including three fatalities.