HUNDREDS of Russian mercenaries have reportedly been killed in an artillery strike by Ukraine.

Footage appears to show an ammo dump burning after it was allegedly hit – reportedly leaving just one survivor.

Private soldiers from Russia’s infamous Wagner Group were reportedly using the sports arena as a base in Kadiivka, eastern Ukraine.

It is claimed up to 300 mercenaries died in the onslaught in what would be one of the biggest losses of life since the war began in February.

He said: “The Armed Forces of Ukraine launched a well-aimed attack on it. Only one occupier survived.” 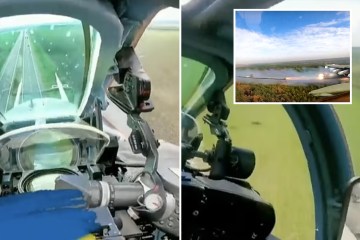 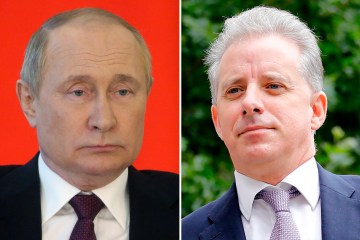 Pictures shared on social media appears to show the site completely burned out after the strike.

Rescue workers in orange helmets can be seen searching through the rubble.

Putin’s notorious Wagner Group are believed to have been secretly operating in Ukraine ever since Russia illegally annexed Crimea.

The Russians have reportedly occupied the sports facility since their initial incursion into Ukraine back in 2014.

Before launching their full scale invasion in February, the Kremlin had been for years supporting pro-Russian rebels in the Donbas region.

The Wagner Group are considered Putin’s private army and have operated across the world, quietly supporting Russian activities in the Middle East and Africa.

Putin is believed to used the group to give himself plausible deniability as they are not explicitly tied to the Kremlin.

It is however widely understood the 8,000 strong mercenary force acts with the full sanction of the Russian state.

The group have been accused of killing children, raping and torturing women, and carrying out brutal executions.

Wagner mercenaries are often retired Russian soldiers and they reportedly earn up to £2,000 pounds a month.

The group first appeared in Ukraine in 2014 where it played a key role in Russia’s illegal seizure of Crimea.

And they have neo-Nazi roots, with the name even being taken from Hitler’s favourite composer Richard Wagner.

It is believed to have been founded by former Russian special forces commando Dmitry Valerievich Utkin.

Utkin has tattoos honouring Adolf Hitler’s evil secret police the SS and the eagle symbol of the Third Reich.

However, the group is believed to have been very ineffective in the recent offensive Ukraine – just like the rest of Putin’s bumbling soldiers.

Investigative organisation Bellingcat has claimed that nearly 3,000 Wagner mercenaries – nearly 40 per cent of their whole force – have died in Ukraine.

Russia is estimated to have lost more than 30,000 men after just over 100 days of the war in one of the biggest military disasters in modern times.

Ukraine is mounting a sterling defence against Russia’s massive military, but their losses are almost mounting as they try to push back Putin’s men.

It is estimated between 100 to 200 Ukrainian troops are now being killed every day on the frontline.

Presidential aide Mykhaylo Podolyak said: “The Russian forces have thrown pretty much everything non-nuclear at the front and that includes heavy artillery, multiple rocket launch systems and aviation.”

And he called on the West to send more weapons to Ukraine due to the “complete lack of parity” between the two armies.

Western nations have been sending weapons and vehicles to Ukraine in an effort to help them fight back against Russia.

But fears continue to loom that should the West get too involved they may get drawn into open war with Moscow.

And such a conflict could spiral out of control into World War 3 and potentially a nuclear exchange.

Britain has been one of the biggest supporters of Ukraine, and yesterday defence secretary Ben Wallace met with hero president Volodymyr Zelensky.

“Words turn into actions. That’s the difference between Ukraine’s relationship with Great Britain and other countries,” said Zelensky.

Wallace praised Ukraine’s “extraordinary” efforts to rebuff the onslaught, praising both Zelensky’s leadership and the resilience of the Ukrainian people.

His visit however has the backdrop of a major diplomatic clash between the UK and Russia over captured Brit soldiers Aiden Aslin and Shaun Pinner.

International fury has been sparked after a pro-Russian sham trial sentenced both men to death in what has been called a “war crime”.

Prime Minister Boris Johnson has ordered ministers to do “everything in their power” to secure the release of Pinner and Aslin.

Ukraine’s ambassador to the UK, Vadym Prystaiko, suggested negotiations for a possible prisoner swap with Moscow.

A relative of Mr Aslin urged Britain and Ukraine to “do everything in their power to have them returned to us safely, and soon”.

They said Mr Aslin, 28, and Mr Pinner, 48, “are not, and never were, mercenaries” and should be treated as prisoners of war, as they were fighting as part of the Ukrainian army.

The men were convicted of taking action towards violent seizure of power, at a court in the self-proclaimed Donetsk People’s Republic.

A No 10 spokesman said: “The Prime Minister was appalled at the sentencing of these men.

“He has been following the case closely and has asked ministers to do everything in their power to try and reunite them with their families as soon as we can.

“We completely condemn the sham sentencing of these men to death. There’s no justification at all for this breach of the protection they’re entitled to.”

Hajj-Muslim pilgrims face losing out from online booking to Mecca