Nick Kyrgios’ neighbour unleashes over the tennis star’s ‘entitle’ parking habit – but is she being too harsh? ‘Name and shame’

Nick Kyrgios’ has been called out by his neighbour over his ‘entitled’ parking habit.

While the neighbour did not mention Kyrgios by name, she heavily implied he was the culprit behind the parking issue in the Sydney suburb of Zetland.

She asked for help to solve the issue on a local Facebook group.

‘Looking for some advice here, it’s a tricky one, we have a car share allocated spot right out the front of our apartment building,’ the neighbour began in the post, which was accompanied by a series of pictures of the vehicle.

‘Recently a very well known famous and quite notorious tennis player has decided that he is somehow entitled to park in it with his own vehicle.

The neighbour asked residents what they believed was the ‘right thing to do’. 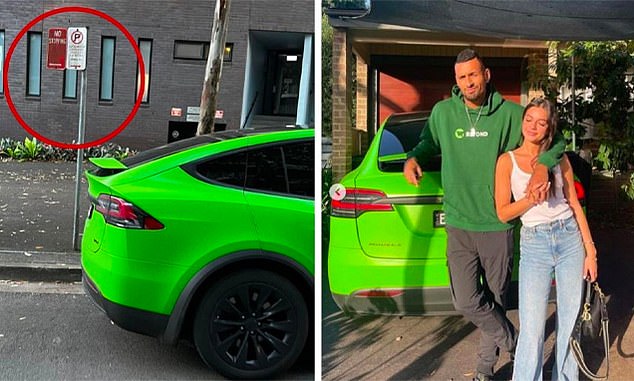 ‘Should I just let this guy go because he’s an elite athlete?’ the neighbour asked.

‘Not that a $400 fines (sic) going to impact his bank account by any means, but it’s more based on principle and setting a good example.

‘Especially when car share is all about minimising pollution, traffic and congestion.

‘No doubt I’ll get a few trolls on here but I just thought it a reasonable question to put forward on this group.’

A comment from Kyrgios’ partner Costeen Hatzi’s sister, Mary Hatzi, confirmed Kyrgios was the culprit behind the bad parking.

‘Hey all, to be fair, he didn’t realise it was a car share spot,’ she chimed as the scandal grew.

‘He parked there to allow other car spots for those who can’t find parking in the area.

‘Nick understands and will move his car. Thank you for all your kind messages.

However, not everyone was out to shame Kyrgios.

‘WOW a lot of angry vicious people in Zetland. There are any number of people parking illegally in the area. Don’t see this kind of vitriol directed at them?’ one person wrote.

Selena Gomez Pokes Fun at Her Single Status on TikTok