‘Why should he not be part of the squad and help the team?’: Ralf Rangnick says incoming Manchester United boss Erik ten Hag should KEEP Cristiano Ronaldo after starring role in win over Brentford

By Chris Wheeler for the Daily Mail

Ronaldo produced a man-of-the-match performance and scored his 24th goal of the season against Brentford last night. On a lap of honour to mark United’s final home game of the season, he appeared to mouth ‘I’m not finished’ to fans, but then waved as he headed down the tunnel.

Rangnick believes United need to strengthen in attack when new boss Ten Hag arrives from Ajax this summer, but thinks the Ronaldo, 37, should see out the second year of his contract.

‘The way we played again tonight, not only because he scored he also won the penalty and helped defensively, why should he not be part of the squad and help the team?’ said Rangnick. ‘But this is a question you have to ask Erik and also Cristiano.

‘Cristiano is not a central striker. He does not want to play in that position but if you look at international football there are not many teams who play with two strikers.

‘For me, it is a question of what players Manchester United have in the future. It is obvious United need two more quality strikers.

‘Modern strikers do not necessarily have to be strikers. Liverpool or Manchester City have five or six top-class strikers. If you ask me if Gabriel Jesus or Jack Grealish is a winger or a striker, they can all play there. 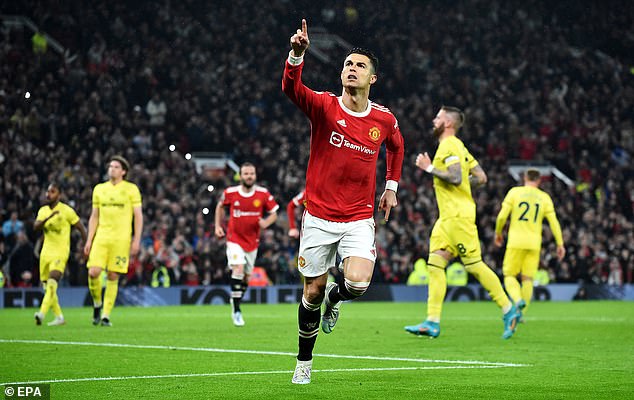 ‘Mason Greenwood would have been one, then after the West Ham game he was no longer part of the squad. Anthony Martial was on loan and Edinson Cavani injured.’

Rangnick was taking charge of his last home game before handing over to Ten Hag. He will step into a consultancy role at Old Trafford as well as taking over as Austria coach.

The German admitted that he wasn’t satisfied with his short-term stint, saying: ‘I’m not completely happy with those six months, especially in the last four or five weeks. I would have expected to qualify for the Champions League, that was the goal we had.’

However, he backed United to rise again under Ten Hag, adding: ‘It’s obvious that quite a few players will leave the club, so there will be the need for new players, for top-quality players, and I strongly believe that, if everybody works together on this process, we can raise the level and bring Manchester United back into spaces and areas where they should be.