A GRAN trapped near Ukraine’s front line has been forced to sleep on a chair in her bathroom as it is the only room in her bomb-blitzed flat protected from shelling.

Vera Hurovaya and hubby Vladimir Krupenya live in the last block of flats left on the edge of Kharkiv.

Neighbours have fled the Saltivka district, a wasteland due to non-stop Russian bombardments.

But Vera, 73, and Vlad, 83, have nowhere to go. The exhausted pair told The Sun they had slept on wooden stools in the cramped, candlelit bathroom since Vladimir Putin’s troops invaded on February 24.

They cannot even lie in their bath as they keep it full of water for drinking, cooking and washing as the taps rarely work. 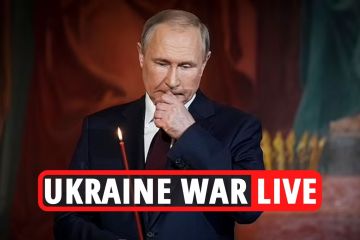 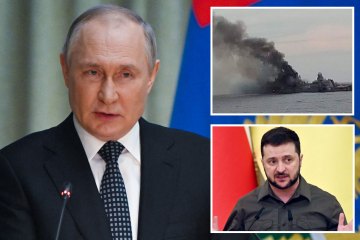 And they are too frail to make the life-or-death dash to an underground shelter as rockets, missiles and tank bombardments crash in day and night.

Their heartwrenching tale came as Russian forces blasted five railway stations in central and western Ukraine hours after US Secretary of State Antony Blinken travelled by rail to capital Kyiv.

Britain’s Defence Secretary Ben Wallace also revealed around 15,000 Russian troops have been killed during the invasion.

Russia has also lost more than 2,000 armoured vehicles, including 530 tanks and 60 helicopters and jets.

And two fuel depots — including one at a military missile base — in Bryansk, 60 miles inside Russia, were rocked by explosions. Some said it was sabotage.

But the news could do nothing to comfort Vera and Vlad.

She cursed so-called Russian peacemakers who are supposedly “de-Nazifying” Ukraine and wept: “What are they doing to us? I don’t understand.”

In their damaged ground floor flat, Vera sleeps with a pillow on the sink while Vlad leans against the bathroom door.

He said: “My father died in World War Two fighting against the Nazis. I could imagine the Nazis doing this to us, but the Russians?”

It is only the old, bold or helpless left behind in Kharkiv where at least 234 civilians have died in shelling. More than 1,600 homes have been destroyed. Deputy mayor Sveltana Horbunova said those able to flee have already done so.

She added: “It is mostly old people left in the city, and volunteers, soldiers and their families. Some people can’t afford to leave, some people have nowhere to go.”

Kharkiv has been blitzed since the first day of the war when it repelled a Russian tank attack.

The city sits 16 miles from the Russian border and is surrounded to the north and east.

In a nearby metro station, The Sun saw babies and their mums cowering underground as rockets rained down above them.

Karina, 28, moved into the station with her 14-month-old baby Nikita and dog Pirate when she felt their 5th floor apartment tremble in an early airstrike.

My father died in World War Two fighting against the Nazis. I could imagine the Nazis doing this to us, but the Russians?

They sleep in a tent next to the ticket barriers. Karina said: “At least it is quiet down here. Nikita is a ray of light and everybody helps me with him. My husband works in a bakery and he stayed to feed people. We stayed here to be with him.”

Along the platform, eight-year-old Nadia tried to celebrate her birthday. Volunteers gave her a pair of plastic dolls but she had no friends her age to play with.

She said: “It is a good birthday. But I want to go outside.”

Her gran Larisa was more glum, saying: “There is nothing good down here. We don’t even know if our home is still standing.”

Larisa said her brother was too sick to leave and they had stayed in Kharkiv to care for him.

Unlucky Vlad and Vera have no relatives to help them.

Three of their four children died before their war began. Their surviving daughter lives in Russia where she has been brainwashed by Putin’s propaganda.

Vera explained: “She doesn’t believe what is happening here. She says it is a liberation.” The couple rely on volunteers for food — with more a thousand people risking their lives each day.

Alex Lebiedev, 24, who led the Red Cross mission to Saltivka said: “The humanitarian crisis here is even worse than the shelling. We deliver two weeks supplies at a time because we don’t know when we can next get in.”

We drove past craters, burnt out cars and the last Ukrainian army checkpoint to reach Vlad and Vera’s shattered home.

Moments after we arrived, a barrage of shells sent us scrambl­ing into a basement.

As Red Cross volunteers handed out supplies, nervous ­soldiers demanded we leave ahead of the next bombardment.

Russian troops have unleashed a series of double-tap strikes — designed to kill first responders by hitting the same place twice.

By then, Vlad and Vera were back in their bathroom. She said: “I can’t believe this is our life. We just want peace to come.”