‘When I was younger I was asking to take Julia Roberts out, it never happened!’: Frank Warren RUBBISHES Dillian Whyte’s call for a rematch with Tyson Fury after his defeat at Wembley, insisting the Gypsy King’s knockout win marks ‘the end’ of their rivalry

Frank Warren has laughed off Dillian Whyte‘s call for a rematch with Tyson Fury and insisted his knockout defeat on Saturday night marked ‘the end’ of their rivalry.

Whyte came up short in his bid to dethrone WBC heavyweight champion Fury last weekend, failing to recover from the devastating right uppercut which floored him in the sixth round at Wembley.

After the defeat, the Brixton heavyweight accused Fury of shoving him to the floor illegally after landing the knockout blow, insisting he should have been given more time to recover as a result.

‘I should have had time to recover, I had time to go back to my corner,’ he told Sky Sports on Monday. ‘Tyson Fury gets away with a lot of things.’ Whyte also added: ‘I hope he doesn’t retire because I want another go.’

Yet during an appearance on talkSPORT, Warren rubbished Whyte’s request for a rematch with Fury, comparing it to asking out actress Julia Roberts on a date.

When asked if Whyte will get his rematch by host Jim White, a bemused Warren said: ‘No. What for? Based upon what?’

White then reminded him that Whyte is asking for a rematch, to which Warren replied: ‘When I was younger I was asking to take Julia Roberts out, it never happened.

‘The only unsatisfactory thing for him was the fact he got stopped, he got knocked out, and that’s the end of it. 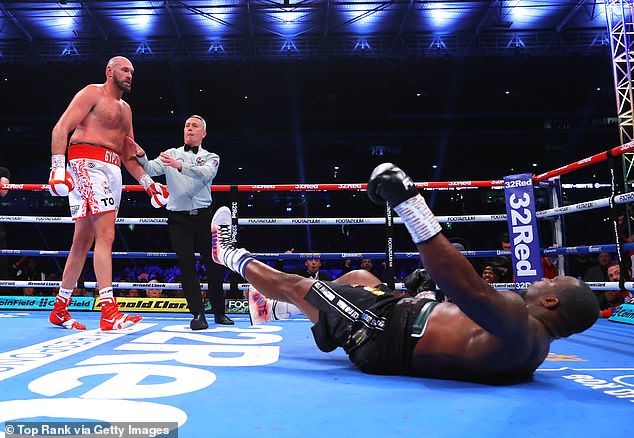 ‘It’s not even debatable, it’s not even worth even going there. Zero [chance of a rematch].

‘It’s not gonna happen Dillian, you’ve got to fight your way back into contention and good luck to you doing that.’

Despite his desire for a second crack at Fury, Whyte is yet to contact Warren’s team over a potential rematch.

‘No, not heard a word from him,’ the Queensberry boss continued. ‘He was gone, he was out on his feet. [It was] better that Tyson pushed him than punched him because he would have never got up.

‘He doesn’t have a case. He was beaten, he was solidly beaten.’

🤣 𝗙𝗿𝗮𝗻𝗸: “When I was young I was asking to take Julia Roberts out…”@FrankWarren_TV says there’s no chance of @DillianWhyte getting a Fury rematch. pic.twitter.com/TN0zKYkfr7

Fury is adamant that the explosive uppercut he detonated on Whyte was the final punch of his storied career. The Gypsy King says he plans to retire after the Wembley showpiece, a stance which many are choosing not to believe.

However, before Saturday’s fight Warren stressed that he would not try to persuade Fury to reverse his decision.

‘You have to remember that he’s been in camp continuously now for months and months and so he wants a break from it.

‘He’ll need a break because he’s been working hard and then he’ll make a decision.’ 30 classic Italian dishes that everyone should try