Russia is failing in its war aims following the invasion of Ukraine, US Secretary of State Antony Blinken has said after a visit to the capital Kyiv.

Speaking at a news conference on the border with Poland after meeting with President Volodymyr Zelenskyy, Mr Blinken added that a “sovereign, independent Ukraine” will be around “a lot longer than Russia’s Putin is on the scene”.

“The strategy that we’ve put in place – massive support for Ukraine, massive pressure against Russia, solidarity with more than 30 countries engaged in these efforts – is having real results,” he said.

“When it comes to Russia’s war aims, Russia is failing, Ukraine is succeeding.

He said Russia “sought to assert the power of its military and its economy” but “we, of course, are seeing just the opposite: a military that is dramatically underperforming, an economy – as a result of sanctions, as a result of a mass exodus from Russia – that is in shambles”.

Russia’s attempt to “divide the West and NATO” has also failed, he said.

Mr Blinken confirmed that US diplomats will start returning to Ukraine next week.

It was the first visit by a senior US official since Russia invaded Ukraine, with Mr Blinken joined by Defence Secretary Lloyd Austin.

Key developments:
• Ukraine has proposed talks with Russia over the fate of civilians and troops who remain in Mariupol
• No humanitarian routes were established out of Mariupol on Sunday – Ukrainian officials hope to try again on Monday
• Boris Johnson described Vladimir Putin’s actions in Ukraine as “nauseating” and “blatant aggression” during a call with UN Secretary-General Antonio Guterres
• An unspecified number of civilians were killed by Russian shelling in Ukraine’s Luhansk region on Sunday, local officials claim
• The war in Ukraine is entering its third month with no end in sight – with many thousands of people killed, millions becoming refugees, and cities reduced to rubble

Russian attacks continue in Ukraine, this time targeting infrastructure far from the front line, according to Ukrainian and Russian reports.

Five train stations were hit by Russian strikes in central and western Ukraine within the same hour, according to Oleksandr Kamyshin, the head of the state-run Ukrainian Railways. Casualties were reported.

One railway facility was in Krasne, outside of the western city of Lviv, which caught fire after it was hit by a missile, according to the region’s governor.

Russian forces launched airstrikes on the Azovstal steelworks, the main remaining Ukrainian stronghold in Mariupol where more than 1,000 civilians are also sheltering, according to Ukrainian officials.

Russia said it will open a humanitarian corridor on Monday to allow civilians to leave – but has been previously accused of violating such proposals.

In the Russian region of Bryansk, just north of Ukraine, a fire erupted at an oil depot, but no immediate cause was given for the blaze.

Mr Blinken praised the strength of Ukrainians in the face of Russia’s attempts to “brutalise” parts of the country.

“Ukrainians are standing up, they’re standing strong, and they’re doing that with the support that we are co-ordinating literally around the world,” he said.

“They can win if they have the right equipment,” he said, pledging to do “everything we can” to provide it.

Asked about reports of weapons falling into the hands of Russian-backed forces in the eastern Donbas region, Mr Austin said it is “difficult” for the US to track the weapons they give Ukraine.

He said Ukrainians are “focused on this issue, and they know we are concerned about it”.

The new financing brings the total US security assistance to Ukraine since the invasion began to $3.7bn (£2.9bn).

The US State Department said new funding “will provide support for the capabilities Ukraine needs as Russia’s forces train their focus on the Donbas” and said the assistance will help Ukraine’s armed forces transition to more advanced weapons and air defence systems. 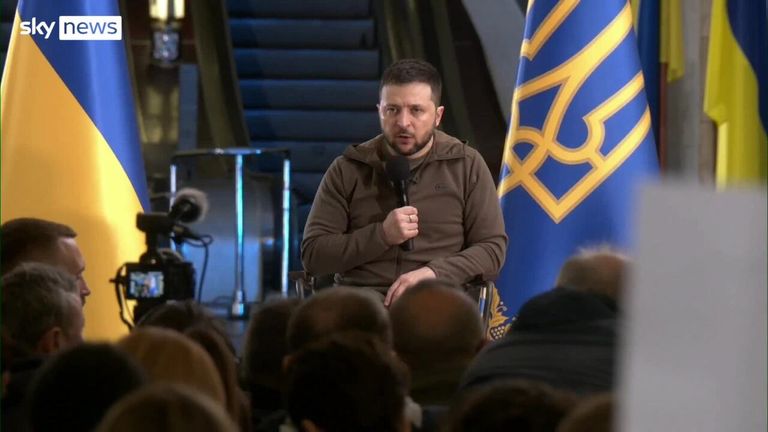 A further $400m (£312m) in new foreign military financing will also be shared among 15 other nations in Central and Eastern Europe, as well as the Balkans.

US President Joe Biden will also soon announce his nominee to be ambassador to Ukraine – Bridget Brink, a career foreign service officer.

The US State Department has vowed to reopen its embassy in Lviv as soon as the situation allows.

While the West has funnelled military equipment to Ukraine, Mr Zelenskyy has stressed repeatedly that his country needs more heavy weapons, including long-range air defence systems and warplanes.

Mr Austin said the “nature of the fight has evolved because the terrain they’re now focused on is a different type of terrain” and the US understands the need for long-range fires and tanks.

He said the US is “doing everything that we can to get him the types of support – the types of artillery and munitions – that will be effective in this stage of the fight”.

Following the meeting, Mr Zelenskyy said he was “very thankful” for the American aid, praising Mr Biden for his “personal support”.