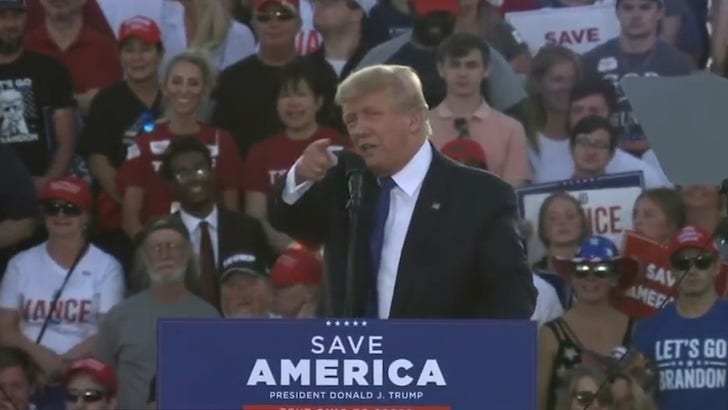 Donald Trump is once again insisting he isn’t dumb … by once again touting the fact he “aced” a cognitive test during his presidency, which is actually quite easy to pass.

DT was in Delaware, OH this weekend for a rally … and at one point, he brought up the Montreal Cognitive Assessment (MOCA) test he took in 2018 — which he famously hyped up in a Fox News interview a couple years later … the whole “woman, man, camera, TV” thing.

His point for discussing it anew … to reiterate, he’s smart … and NOT stupid, like he says the media makes him out to be. Apparently, that’s why he wanted to do this at the time.

TRUMP: I asked the doctor, I said, ‘is there some kind of cognitive test that I could take?’ … the last questions are much more difficult. Like a memory question. You’ll go ‘person, woman, man, camera, TV.’ So they say — ‘can you repeat that?’ … for me it was easy.” 😳 pic.twitter.com/pCKYoNy3BH

Trump goes into detail about the convo he had with then-WH physician Dr. Ronny Jackson — how he insisted he takes MOCA to silence haters who called him an idiot. He says he knew they were wrong … because he apparently has a long history of “geniuses” in his fam.

The ex-Prez insists the exam is strenuous, or at least that’s what he says he was told — but as many have noted since … MOCA is very simple, mostly consisting of stuff like connecting lettered or numbered dots together, drawing a clock, correctly ID’ing a lion or camel and being able to recite a series of words repeatedly … which Trump was proud to note, he did.

As you know, Trump’s mental fitness was often questioned during his tenure — including one notable time that he appeared to slur his words while talking publicly — but he and his team dismissed all of that … and the doc himself even had an explanation.

Now, as Trump appears to be ramping up for another run … he’s back on the intelligence horse. When you’re with him, you’re NOT with stupid — at least that’s DT’s thinking.