Four months on from securing silverware with his last goals, Kyogo Furuhashi’s return to the scoresheet helped ease any anxiety about the main prize slipping from Celtic’s grasp.

They’re on the brink now. Close enough to smell the polish. Beat Rangers this Sunday and Ange Postecoglou’s side will be Premiership champions in all but the engraving.

Restoring a six-point lead over their Old Firm rivals perhaps wasn’t quite as simple as it should have been after fit-again Furuhashi’s 12th-minute header — his first goal since the League Cup final on December 19 and his 17th of the season. 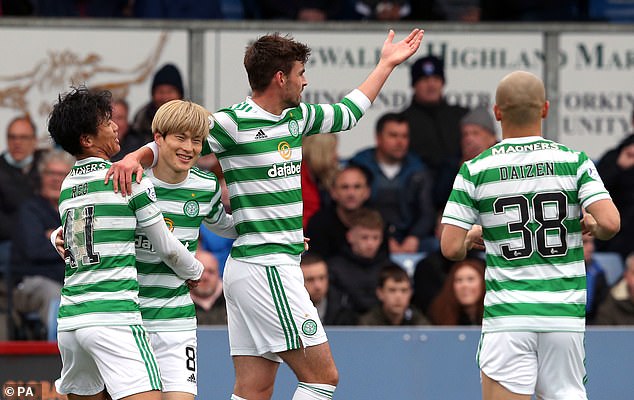 Chances to make victory safe were spurned, not least by the Japanese striker, before Jota slid home a deserved clincher with three minutes left.

The winning margin also put Celtic’s goal difference advantage back at 19. With just four games remaining, it’s the equivalent of an extra point.

Rangers looked on in hope, but here was the first answer. It wasn’t all perfect but there could be no disputing the dominance of Postecoglou’s side nor the merits of their victory. They didn’t look much like a team about to crack.

The Australian spoke about ‘eating up pressure for breakfast’. He wanted the Hampden loss to be used as fuel to see Celtic over the league finishing line. That’s now coming into view. 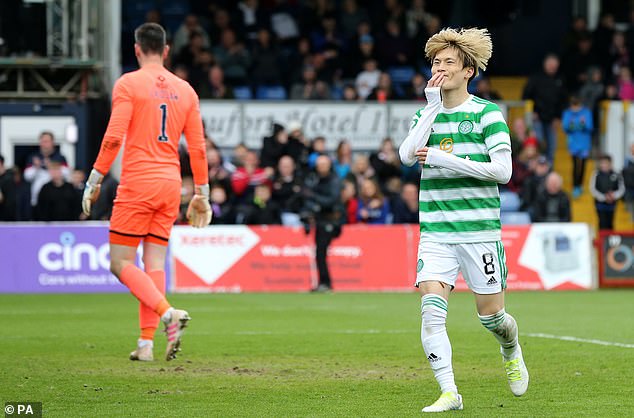 Dingwall has been an important staging post along the way. It took all of 97 minutes for Celtic to win here in December, the last time County had lost at home.

The Parkhead club’s return wasn’t quite so stressful as they made it 28 Premiership games unbeaten, a run that includes 24 wins.

They would now need to drop more points in the final three weeks than they have in seven months. A tenth title in 11 years beckons.

County improved in the second half here, belatedly causing Celtic problems, and haven’t been damaged by the loss.

With Motherwell and Dundee United both also suffering defeat at the weekend, Malky Mackay still has every chance of securing European qualification that would seem near miraculous given how the season started.

The changes Postecoglou made in response to Hampden were a mixture of necessity and preference.

An injury to Josip Juranovic dictated the former category as Anthony Ralston took over at right-back. 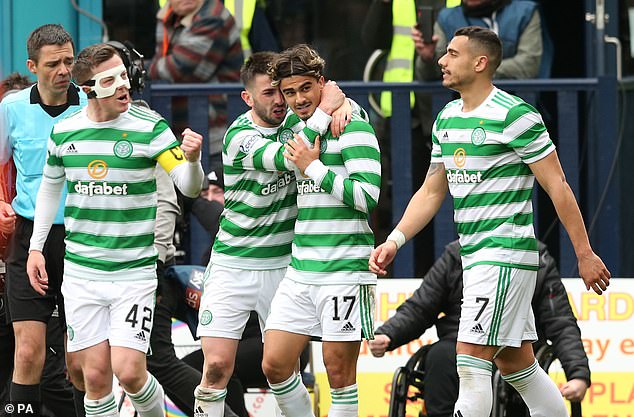 Tom Rogic dropped to the bench for Matt O’Riley, while Furuhashi made his first start since Boxing Day ahead of Liel Abada.

Giorgos Giakoumakis had to be content with a spot on the bench after recovering from a hamstring strain.

Those in the starting line-up quickly established authority. County tried to start aggressively — with Ross Callachan booked for flattening Ralston — but their attempts at disruption were largely ineffective.

Celtic were able to pick a path forward and find their passing rhythm.

It led to an opening goal after just 12 minutes. Callum McGregor shuttled the ball wide right to Jota, who had Jake Vokins blocking his path. The obstacle was soon removed.

Twisting inside and out, Jota disorientated the Southampton loanee before delivering a perfect curling cross directly on to Furuhashi’s head at the far post.

The Japanese striker was unerring in his conversion, sending the ball back across goal and beyond the helpless Ross Laidlaw.

Postecoglou raised his arms in celebration. A pretty much perfect start had placed the first half where he wanted it. 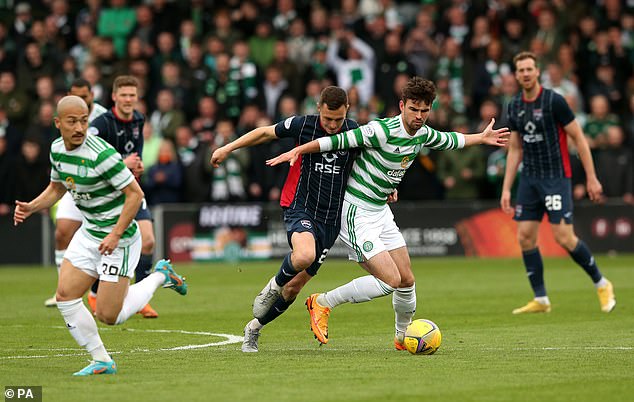 Ross County tried to start aggressively, but Celtic were able to find their passing rhythm

Celtic continued to probe for a greater advantage but lacked the required precision to make it happen. Furuhashi alone could have easily claimed a hat-trick.

An offside flag thwarted him when he steered in an O’Riley through ball, before a spinning effort from another Jota cross saw the bar clipped.

The 27-year-old then spurned a golden opportunity. Laidlaw got it all wrong as he spilled O’Riley’s shot from distance but Furuhashi sent the loose ball too close to the goalkeeper, who thrust out a foot to spare his embarrassment. Postecoglou spun away in frustration.

He could easily recall the cost of Cameron Carter-Vickers passing up a snip against Rangers seven days earlier.

Furuhashi’s next chance came after a lovely passing interchange with Daizen Maeda on the left. It led to a tricky finish sent too high.

The traffic was in one direction yet County clung on to keep themselves in contention. Once more, a Jota delivery found its target and Maeda was denied by a good reaction stop from Laidlaw.

Mackay had made just one change to the team that sealed top-six football a fortnight ago — Keith Watson stepping in for Jack Baldwin — but a formula to trouble Celtic was elusive.

Joe Hart was only in trouble when Postecoglou chided him for not moving the ball quickly enough. 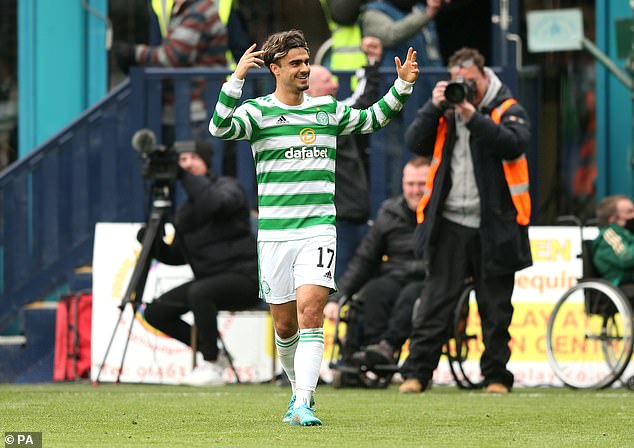 Whatever the County boss said at half-time had a positive effect. His side finally managed to pose some kind of threat as the second period unfolded.

Regan Charles-Cook burrowed his way beyond Ralston to power his way into the area, setting up Harry Paton for a shot blocked by Carter-Vickers.

Then Alex Iacovitti offloaded a snapshot that presented a simple save for Hart.

A surging run and strike from Jota brought Celtic back on to the front foot but this was a more ragged spell for the Premiership leaders. A Jordan White effort that zipped wide provided another warning.

Postecoglou’s response was a triple change. Off went Furuhashi, Maeda and O’Riley. On came Giakoumakis, Abada and Rogic.

It nearly bore swift dividends. Greg Taylor overlapped on the left before cutting back an enticing low cross. When Rogic was thwarted, it broke for Abada to thump just off target.

The decisive blow arrived on 87 minutes. Abada’s cross found Giakoumakis for a looping effort that hit the bar.

Jota was first to respond, sliding the ball over the line before taking off in a celebratory run and kung-fu kicking the corner flag. Like everyone else, he knew what this win meant.

Ethiopia's Lalibela struggles as war and Covid-19 keep tourists away

Jane Fonda Says Being 'Closer to Death' Doesn't Bother Her