The fallout from the controversial NRL match between Penrith and Canberra continues, with Raiders forward Corey Horsburgh being slammed on social media for disrespecting the Anzacs.

The Panthers won 36-6 in a match that saw a melee between the two clubs and Penrith fans mocking the Raiders with their version of the Viking clap during the second half of the heated contest.

But it was what transpired before the game had even started that has angered fans on social media. 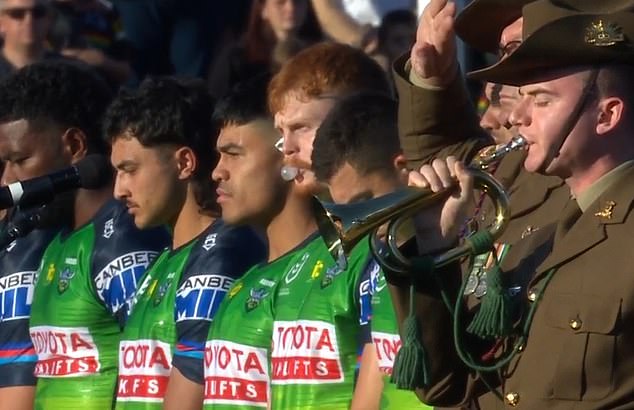 While serviceman Ben Bruni played The Ode to a silent and respectful crowd at BlueBet Stadium, Horsburgh stood in the line with his teammates chewing gum and blowing bubbles.

His actions have angered fans who felt that it was disrespectful to Australian and New Zealand soldiers.

‘So Canberra fans are upset about us doing the Viking Clap but silent on the actual disrespect from Corey Horsburgh blowing a bubble gum bubble during the Anzac ceremony,’ Josh posted on Twitter.

‘Are the Raiders also fuming because Corey Horsburgh was blowing bubble gum during the Last Post?’ added Sandy Lanceley.

It spilled over onto Facebook as well, with Terrie-Anne Walters saying: ‘I’m sad to see some people are not appreciating the freedom and lifestyle they have thanks to the dedication and sacrifice of others.’

‘I think he should be fined by the NRL for bringing the game into disrepute. I was watching from home and when I saw this extraordinarily disrespectful act. . . I just had no words,’ Di Touzell said.

However, there was also support for Horsburgh, with Paul Argyros posting: ‘Leave the kid alone prob does it all the time, as if he meant to disrespect. Woke crew looking to live a woke life.’

‘Anzacs fought for the freedom to blow bubbles too,’ Scott Jacko Jackson added. 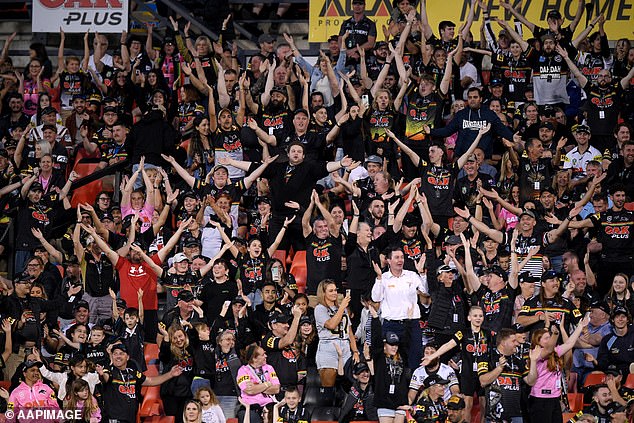 The annual clash between the Raiders and Panthers is fast becoming a fierce rivalry with no love lost between the two clubs.

Last year the Raiders labelled Panthers fans as ‘arrogant’ after Raiders foward Joe Tapine was dragged into a post-try celebration that escalated to a melee between him and try-scorer Stephen Crichton.

Luai tried to simmer the tensions between the clubs ahead of Sunday’s clash by telling AAP: ‘We don’t plan to (get under their skin), it’s just the heat of the battle.’ 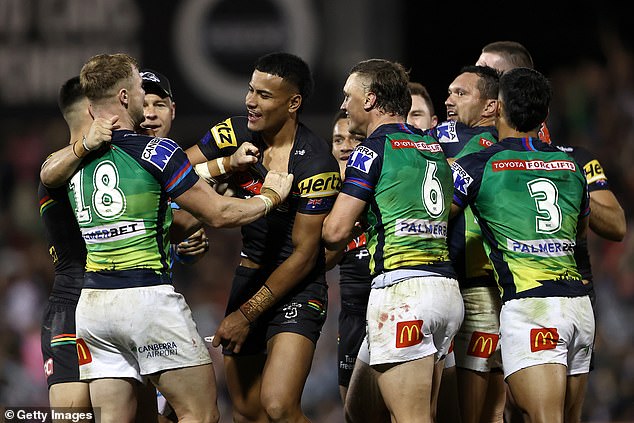 However tensions escalated again on Sunday after the fulltime siren and a heated exchange between Crichton and Canberra’s Jack Wighton turned into an ugly brawl between the two sides.

‘What happened there is garbage,’ he told the two players.

‘At the end of the game, seriously? We’re into round seven, you blokes have got a lot to lose if blokes spend weeks on judiciary.

‘The incident is on report, but you’ve got to understand, you blokes as clubs, there’s young kids watching that and that’s nonsense.’