Ajax starlet Brian Brobbey asks Erik ten Hag to ‘bring me with you’ to Manchester United in cheeky plea to his departing boss – but quickly laughs it off as a joke!

Ajax forward Brian Brobbey joked that he hopes departing manager Erik ten Hag will try and bring him to Old Trafford in a couple of years.

Ten Hag will take over from Ralf Rangnick at the end of the season, once he’s completed his fifth and final season with the Dutch giants.

The Dutchman is currently on course to win his third league title with his side leading the Eredivisie by four points. 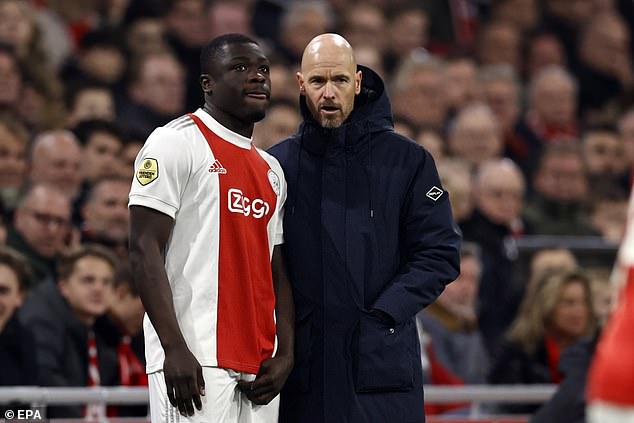 He had been strongly linked with United for months and the club confirmed the appointment last week.

‘I am very happy for him and he really deserves it after everything he has done for Ajax,’ Brobbey said of Ten Hag during a press conference.

He then continued: ‘If only he brings me with him in two years…. no no.. joking joking!’

Brobbey – who returned to Ajax from RB Leipzig in January – proceeded to burst out laughing after he made his playful plea to Ten Hag with the entire press room joining in.

The 20-year-old striker has managed four goals in seven league games since rejoining the Ajax squad in the window.

Following the news of his appointment, Ten Hag said: ‘It is a great honour to be appointed manager of Manchester United and I am hugely excited by the challenge ahead.

‘I know the history of this great club and the passion of the fans, and I am absolutely determined to develop a team capable of delivering the success they deserve.

‘It will be difficult to leave Ajax after these incredible years, and I can assure our fans of my complete commitment and focus on bringing this season to a successful conclusion before I move to Manchester United.’