Macron is on track to become the first French president in 20 years to win re-election.

He is expected to beat his opponent and leader of the National Rally party Marine Le Pen with 58.2 per cent of the vote.

Le Pen is expected to win 41.8 percent of the vote – a comfortable 16-point win for Macron.

Reacting to the results, the defeated far-right challenger said: “Tonight’s result is in itself an earth-shattering victory (for us). 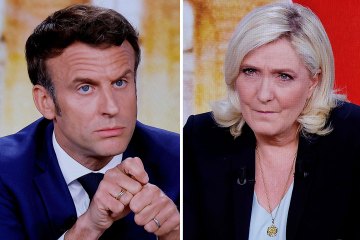 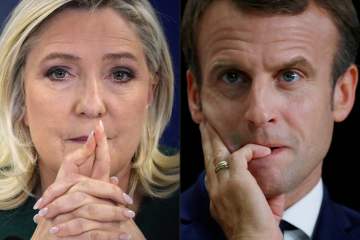 “I fear that the five-year term that is about to begin will not break with the brutal methods of the previous one.

“In order to avoid the monopolisation of power by a few, more than ever I will pursue my commitment to France and the French people with the energy, perseverance and affection that you know me for.”

Boris Johnson congratulated Macron on his re-elections in a Twitter message written in French and English.

“France is one of our closest and most important allies,” he wrote.

“I look forward to continuing to work together on the issues which matter most to our two countries and to the world.”

Macron’s foreign minster Jean-Yves Le Drian said: “The French did not want a France that turns in on itself,” while European Affairs Minister Clement Beaune said her party had some “work” to do.

Health Minister Olivier Veran said: “We will not spoil the victory… but the (far-right) has its higher score ever.

“There will be continuity in government policy because the president has been re-elected. But we have also heard the French people’s message.

“There will be a change of method, the French people will be consulted.”

Election pundits had predicted a close presidential race after Le Pen’s party won 47.5 percent in the runoff round of voting on April 10.

Turnout was at 63.23 per cent among French voters by 5pm local time (4pm UK time) – down two percent from 2017 – the interior ministry said.

Exit polls are not actual elections results. Instead, they are said to reflect voter sentiment on the day as pollsters survey voters at stations immediately after they cast their ballot

Macron was leading the vote in the French presidential election with between 55 and 58 per cent of ballots going his way, according to Belgian newspaper La Libre and Belgian public broadcaster RTBF.

Polling stations opened at 8am local time (7am UK time) and close at 7pm, although most major cities will be allowed to remain open for another hour until 8pm.

Brussels can breath a sigh of relief after fears a shock victory for Le Pen in today’s presidential election failed to materialise.

Experts claim the far-right Eurosceptic’s election win would cement “the end of the EU as we know it”.

They said Le Pen’s win would have put France “on a direct collision course” with EU rules and bring the whole institution crashing down.

James Shields, Professor of French Politics at the University of Warwick, says a Le Pen victory would “herald drastic changes in terms of France’s place within the EU”.

He told The Sun Online: “Le Pen no longer argues overtly for French withdrawal from the EU and euro, as she did in 2017, declaring now her intent to reform the EU from within.

“But her programme, if implemented, would pose critical challenges to France’s continued membership of the EU.

“Her proposals on Europe amount to ‘Frexit’ in all but name.”

Le Pen has been looking to unseat the incumbent president in a repeat of 2017’s election runoff, although the polling gap between the pair is far smaller this time round.