Meaningless mid-table end-of-season dead rubber? You wouldn’t have known it.

Brighton and Southampton went at this one hammer and tongs in their pursuit of a top-half finish in the Premier League, the realistic ceiling of their current ambitions.

In the end, it was Graham Potter and Brighton left feeling frustrated after they chucked away a two-goal lead earned courtesy of the club’s fastest-ever Premier League goal, scored by Danny Welbeck, and the gift of an own goal by Mohammed Salisu. 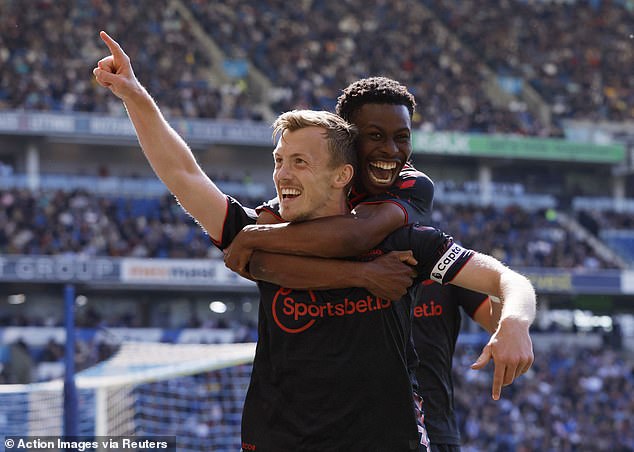 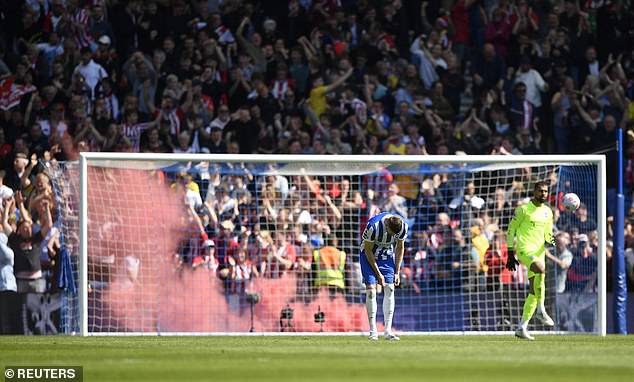 They also saw a late strike by Pascal Gross disallowed by the VAR officials for what looked like a marginal offside after they’d ceded control of the contest after the break.

But at least they entertained an Amex Stadium crowd who have been starved of goals all season. Brighton had only scored 10 times in the league here prior to this one, the lowest of anyone. Seeing their side score more than once is a real novelty.

Southampton were second-best in the first-half but gained a lifeline when James Ward-Prowse fired home his customary free-kick in stoppage time.

Ralph Hasenhuttl’s men were much improved after the break and captain Ward-Prowse again underlined his colossal worth to the Saints with a well-taken leveller.

The draw didn’t really help either in their top-half aims as various clubs jostle for position in the Premier League midriff.

Both have found consistency elusive yet both have never been in relegation danger. Portions of both fanbases may feel a change of manager necessary to take them to the next level but realism prevails.

Hasenhuttl’s dissatisfaction at Thursday night’s loss to relegation-threatened Burnley manifested itself in not only six changes to his team selection but a return to 4-4-2.

Unfortunately, the Austrian’s mood didn’t brighten when his side fell behind after just 74 seconds. It was not only the quickest Premier League goal Welbeck has scored in his career but the fastest Brighton have ever scored in this competition.

Marc Cucurella worked space to deliver a low cross from the left and it seemed keeper Fraser Forster and defender Salisu got in one another’s way as they attempted to reach it before Enock Mwepu. 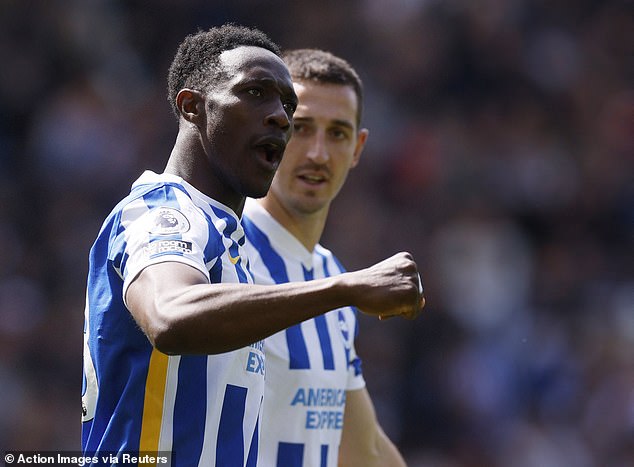 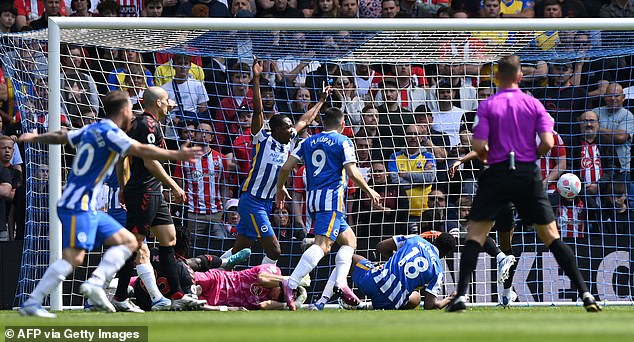 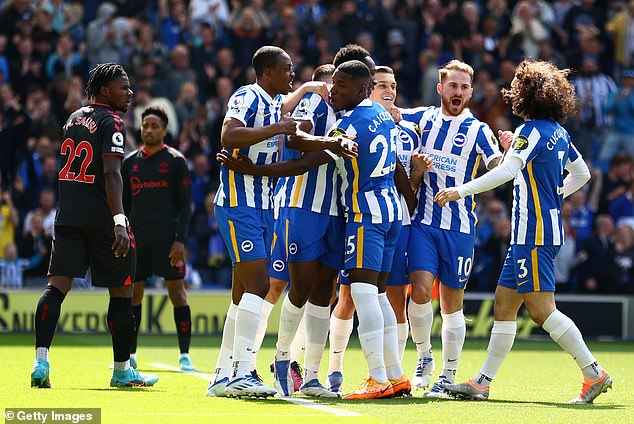 They collided and the ball popped out for Welbeck to tap home one of the simplest goals of his career. It was the first goal the Amex Stadium had seen since Adam Webster scored against Chelsea back on January 18 and so early some were still walking in.

Initially, Southampton responded well. Tino Livramento wasn’t closed down on the right and saw his deflected shot rebound off the inside of the far post. The ball hit keeper Robert Sanchez and just evaded Che Adams as he contorted his body to try and turn it home.

But Brighton dominated the remainder of the half. Welbeck was in the mood and forced Fraser to turn aside an angled drive.

The hosts saw a goal chalked off for offside when Neal Maupay turned home Lewis Dunk’s header from a corner but from beyond the last defender.

Mwepu looked certain to double the lead but Kyle Walker-Peters slid in to pinch the ball away.

Southampton were under the cosh and things got even worse when Livramento appeared to twist his knee as he chased Mwepu for the ball.

The England under-21 right-back immediately raised his hand in an appeal for treatment and the severity quickly became clear when Livramento was carried off on a stretcher, his leg in a padded support and with an oxygen mask over his mouth.

Hasenhuttl went over to offer some words of consolation as the youngster was wheeled off the playing surface.

Brighton were almost gifted a second as half-time approached. Oriol Romeu was robbed of the ball by Maupay and Welbeck had two bites of the cherry after Leandro Trossard cut the ball back but couldn’t take them.

No matter. Three minutes later, on the cusp of the half-time whistle, Brighton doubled their lead thanks to another moment of Southampton largesse.

Welbeck sparked the mood with a threaded pass right-to-left to Trossard, who was left alone in plenty of space. His return pass through Saints lines looked ambitious but was well-executed and found Welbeck in the box. 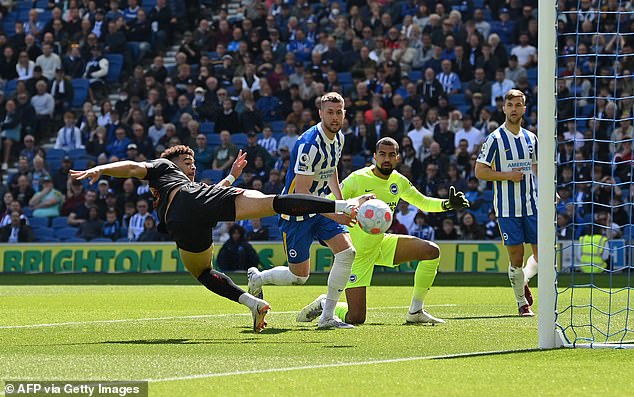 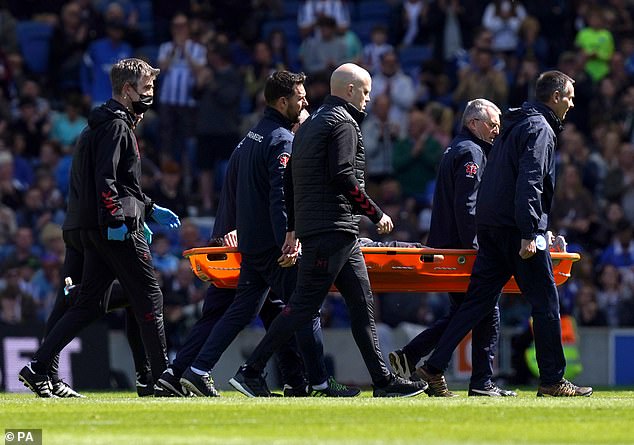 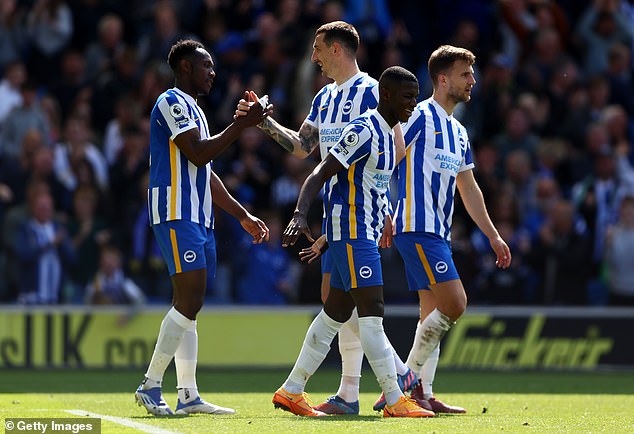 Salisu did the job of finishing for him, turning the ball past his own keeper Forster and in off the post.

Southampton looked down and out but when you have a set-piece specialist like Ward-Prowse, all you need is a dead ball opportunity within shooting range.

When Cucurella fouled 25 yards out deep into first-half stoppage time, they had precisely that. Ward-Prowse hit a low, skidding shot that bounced past Robert Sanchez and into the bottom corner. 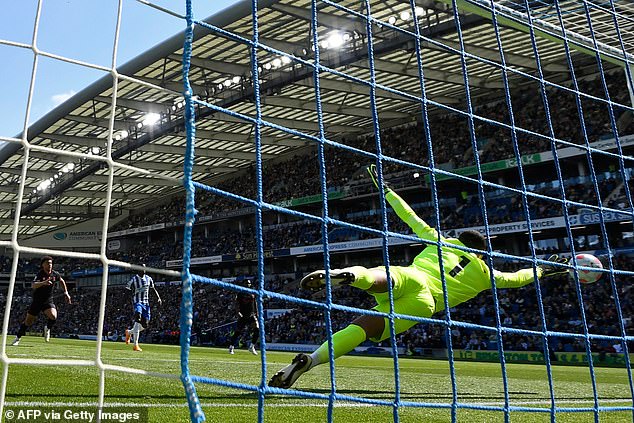 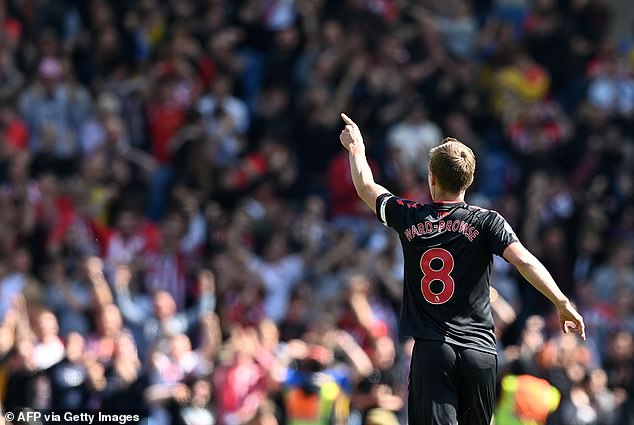 And after Southampton started the second-half with renewed vigour, it was the unerring accuracy of Ward-Prowse that drew them level.

His 20-yard shot, after Romeu backheeled the ball into his path, picked out the bottom corner. But Brighton only had themselves to blame, inviting the pressure after Webster’s loose ball out of defence.

The visitors were on top now with Shane Long forcing a flying save from Sanchez. They bossed proceedings for most of the second-half, not allowing Brighton any time on the ball.

Frustrations rose around the Amex, not least when Maupay didn’t appear to make the effort to reach Cucurella’s threaded through ball.

Moments later, however, they were all on their feet, believing that Gross had restored their lead. It was a nice finish, from outside the box, but VAR determined that Gross was offside by the finest of margins in the build-up as he ran onto Trossard’s pass.

In the closing minutes, Romeu headed over for Southampton but a point each was fair.