There have been some bumpy roads for Arsenal to navigate under Mikel Arteta but especially at times like this it all feels worth it.

The sun was shining over the Emirates and Saturday ended with their future looking bright again following a second significant win in a matter of days.

Comfortable winners over Manchester United after also beating Chelsea last week, playing ‘Ole’ football, the ‘Super Mik Arteta’ chant echoing around the ground and, to top it off, Tottenham dropping points to hand Arsenal back the initiative in the race for the Champions League. 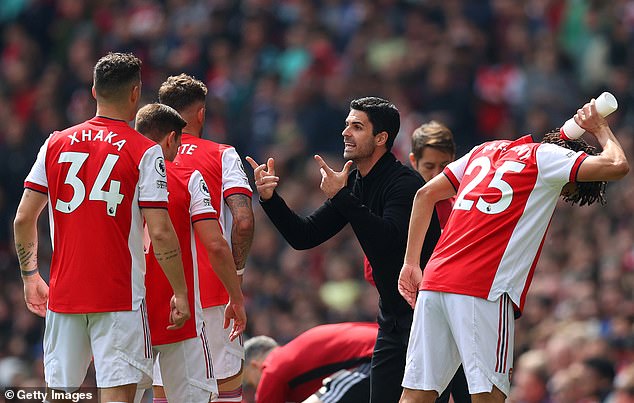 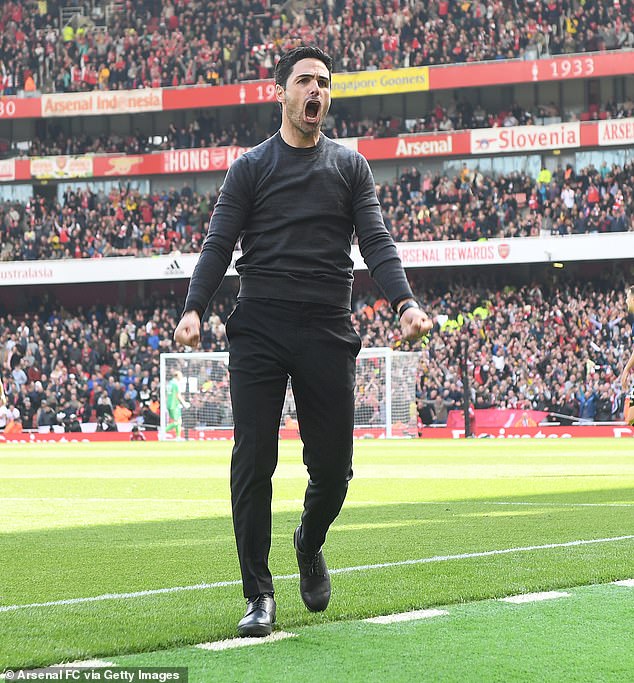 It is not just their hosts’ superior ruthlessness that United could learn from Arsenal after this defeat which ended their top four hopes.

But as they prepare to hand another manager, Erik ten Hag, the chance to restore them to former glories Arsenal’s trust in and backing of Arteta is also worth taking note of.

During those times when both might have been tested Arsenal, internally, have never wavered. 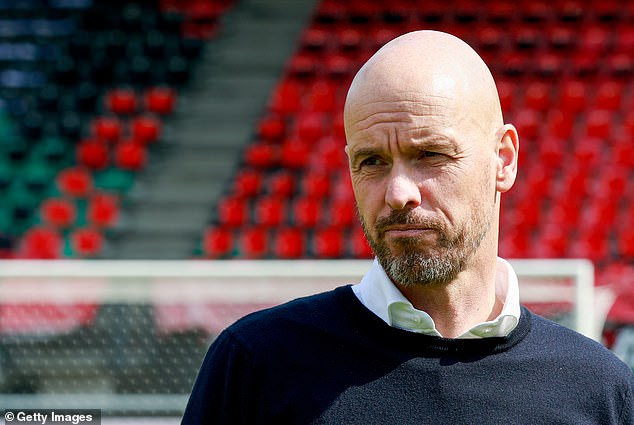 Behind the scenes there is a quiet satisfaction at the strength they have shown during those sticky periods when it would have been easy to do otherwise and happiness with how things are progressing as a result.

Successive eighth-place finishes, missing out on Europe for the first time in 25 years, the run of just two league wins between late September and Boxing Day last season, their horror start to this campaign and even the recent wobble of three in a row defeats are the sort of moments when Arsenal have had to keep the faith.

Off the pitch, Arteta’s ostracising of Mesut Ozil and captain Pierre-Emerick Aubameyang in particular were also difficult episodes for the club.

Each time Arsenal have remained resolute behind their manager.

Arteta’s ostracising of Mesut Ozil (right) and captain Pierre-Emerick Aubameyang (left) in particular were also difficult episodes for the club, but they stuck by the manager

The Gunners have gone ‘all in’ on Arteta after going through a thorough process before appointing him in December 2019 having first assessed his credentials when seeking a successor for Arsene Wenger in the summer of 2018.

The hierarchy’s need for Arteta’s appointment to work after the unsuccessful appointment of Unai Emery and Freddie Ljungberg’s interim stint has also helped earn him breathing space. 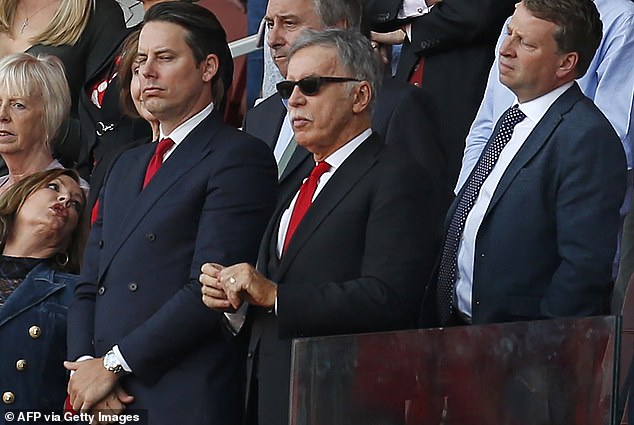 He is also on good terms with Josh’s father and club owner Stan, going out to see Kroenke senior in January, watch his Colorado Avalanche ice hockey team and discuss transfer plans.

Arteta is also close to non-executive director Tim Lewis – the Kroenke’s eyes and ears in England who he can discuss issues with – and has what are described as good, open and honest relationships with CEO Vinai Venkatesham, experienced executive and director of football operations Richard Garlick plus technical director Edu.

Arteta has been given the licence to call the shots safe in the knowledge he has such a supportive environment around him.

To rip up and rebuild the squad he inherited with only a handful of players surviving.

When he has wanted to accelerate that process by culling those he did not want in his dressing room sizeable pay-offs have been sanctioned and players moved on in a fashion that has been described as clinical and brutal.

When there was a decision to be made over spending big on a striker or a goalkeeper last summer Arteta is understood to have preferred the latter given the options he had at the time while some at Arsenal favoured the former.

Hands-on and a major part of the decision-making process when it comes to players, Arteta’s choice won and, in Aaron Ramsdale, has proved a good one. 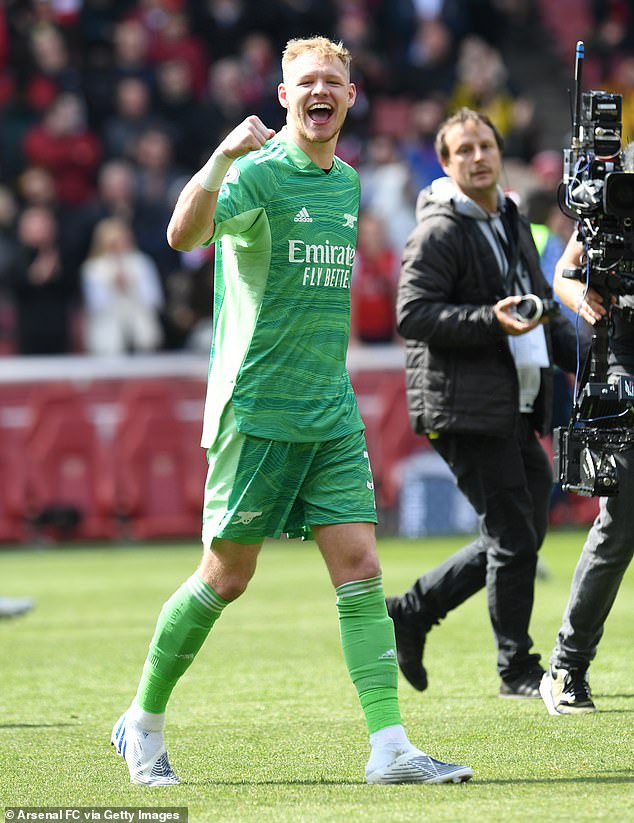 Ten Hag will hope he receives similar support, time to mould United and freedom to make the big calls when he gets into the Old Trafford hotseat.

Arteta is not being backed blindly. His reputation as a promising coach was built at Manchester City and he reinforced that by winning the FA Cup and Community Shield in his first six months, crucial early signs he was taking them in the right direction and deserved further time to continue his work.

Some outsiders who have dealt with the club regularly over a long period time credit strong personality Arteta with changing Arsenal’s mentality.

Ambition has replaced the sense they were seemingly happy to just be taking part and treading water.

It is fascinating now to look back on an interview Edu conducted in December 2020, partially about Arteta, when Arsenal were in the midst of last season’s poor run.

Arsenal have long been convinced he is the right man to lead them long term and back then Edu spoke of the need for stability and patience with Arteta, who was steering the club through the pandemic, emphatically backed the Spaniard and also said with absolute conviction that Arsenal ‘would be fine in the future’ if they continued what they were doing and he was seeing behind the scenes.

He said: ‘It’s strange to say that to you guys because the results are not coming, but I see properly the way Mikel is working so that’s why I’m here to send that message to you guys.

‘The way I see things every day here – I’m here 9 to 5 or 6 – everything’s right. The way we’re driving, the way we’re going, is making me believe a lot in the future. I can see a big, big, big and beautiful future.’

It was hard to see why Edu was so adamant then but there have been times this season which have made the Brazilian now seem like a fortune teller.

Arsenal are not perfect and there will still be more bumps in the road for Arteta and his developing side.

Missing out on the Champions League, with fourth place far from a foregone conclusion, could be one.

But they are at least heading in the right direction and have genuine hope again, which is more than what you can say for United right now.

France election: 'Many voted to build a barricade against the far-right', says Macron