VLADIMIR Putin was again spotted around what appears to be Russia’s secret nuclear briefcase as Russia moved missile launchers to its border amid a deepening row over Nato.

The Russian tyrant arrived at the Vostochny Cosmodrome via helicopter as he today visited a space port alongside Belarus dictator Alexander Lukashenko.

Russia was marking 60 years since pioneering cosmonaut Yuri Gagarin’s maiden journey to space – but the event was overshadowed by the war in Ukraine and tensions with the West.

Wrapped up for the occasion, Putin arrived on the scene accompanied by his top military henchman who were seen carrying the alleged launch device – just days after it was snapped at a state funeral.

Its visible presence is thought to be a chilling sign that the crazed Russian leader could deploy devastating nuclear weapons at any time as he continues his bloody invasion of Ukraine.

Today he did nothing to alleviate those tensions as he vowed that Russia will press on with military action until its goals are fulfilled. 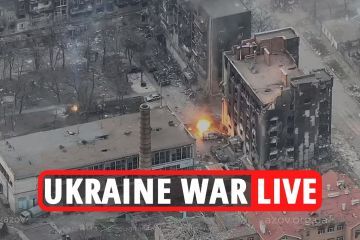 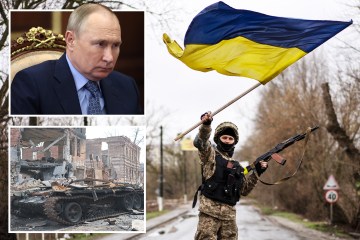 Suggesting that the campaign is going according to plan, he claimed it is not moving faster because Russia wants to minimize losses, before adding the war would stop not until the fulfilment of the tasks “that have been set.”

And elsewhere, Russian missile systems were spotted being moved towards the country’s northern border with Finland.

It came as the country is believed to be on the cusp of joining Nato – along with Sweden.

Russia has repeatedly warned both Nordic nations not to sign up for the defensive alliance.

Kremlin spokesperson Dmitry Peskov warned the move would “not improve” the security situation in Europe.

And meanwhile, Moscow lawmaker Vladimir Dzhabarov added more bluntly it would mean “the destruction of the country”.

Video shows trucks believed to be carrying the K-300P Bastion-P mobile missile system designed to strike warships driving past a sign to Helsinki.

Nato is bolstering its flanks amid fears the war in Ukraine could spiral into a wider conflict.

Asked by Russian space agency workers if the operation in Ukraine would achieve its goals, Putin said: “Absolutely. I don’t have any doubt at all.”

“Its goals are absolutely clear and noble, There is no doubt that the goals will be achieved.”

“That Blitzkrieg on which our foes were counting on did not work,” Putin then added of the West’s crippling sanctions that have been imposed.

The Russian despot then claimed that Ukraine had backtracked on proposals it made during talks with Russian negotiators in Istanbul, resulting in a deadlock in talks and leaving Moscow no other choice but to press on with its offensive.

It came as his partner in crime for the day, Lukashenko, insisted that Belarus must be involved in negotiations to resolve the ongoing conflict.

He said that the nation had been unfairly labelled “an accomplice of the aggressor.”

This week, however, the regime reportedly moved onto it’s next horrifying second phase amid fears they have unleashed chemical weapons on the besieged city of Mariupol.

It has been reported that the substance, believed to have been released on Monday, caused breathing issues to soldiers including, “respiratory failure” and “vestibulo-atactic syndrome”.

Andriy Biletsky, the leader of the Azov volunteer regiment, said that three people in the region had experienced “poisoning by warfare chemicals, but without catastrophic consequences”.

The UK’s foreign secretary, Liz Truss, said work was under way to verify the claims, adding: “Any use of such weapons would be a callous escalation in this conflict and we will hold [Vladimir] Putin and his regime to account.”

Meanwhile the Armed Forces minister, James Heappey, has said that all options would be on table in response to any use of chemical weapons in Ukraine by Russia.

“There are some things that are beyond the pale, and the use of chemical weapons will get a response and all options are on the table for what that response could be,” Mr Heappey told Sky News.

Many western leaders have continued to grow increasingly concerned that a desperate Putin will use chemical weapons as his invasion falters.

British officials reportedly suspect that Russia is ready to unleash incendiary bombs on citizens, which burn through flesh at up to 2,700 degrees C,  in a bid to capture eastern the eastern regions.

Ukraine warned the Donbas assault could start within days and had urged civilians to flee.

But Western sources said it would take “considerable time” for Moscow to get its units up to strength.

And they claimed morale among Russia’s frontline troops was at rock-bottom.

“We’ve seen numbers of troops being unwilling to fight and refusing to engage in operations,” one source said.

“It is still unclear how they’re going to overcome some of the morale issues that they will have with their troops.

“We know they’ve got problems with their command and control.”

An eight-mile convoy of Russian armour was spotted moving south through eastern Ukraine on Saturday.

It is part of a ploy to outflank Ukraine’s forces defending the Donbas front line and cut them off from behind.