CAROLINE Crouch’s shameless husband told a court he “still loves her” in a bid to try to dodge a murder charge.

Babis Anagnostopoulos, 34, has been accused of smothering his 20-year-old wife to death last year in front of their baby daughter before faking a burglary to blame it on an Albanian gang.

Brit mum Caroline was found murdered in her Athens home in the early hours of May 12, 2021, and her husband told cops she had been killed in a botched robbery.

In the weeks that followed, Anagnostopoulos kept up his charade, crying to reporters, visiting his wife’s grave with their daughter, Lydia, and comforting Caroline’s heartbroken parents.

Police became suspicious when his story began to fall apart during an eight-hour interrogation before he was finally arrested on June 17 after reportedly making a shock confession.

He has been held at the country’s top-security Korydallos prison since and arrived at an Athens court for his trial today. 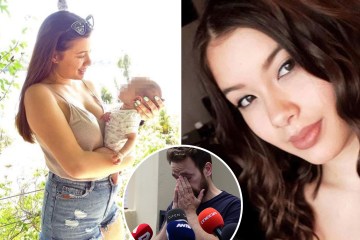 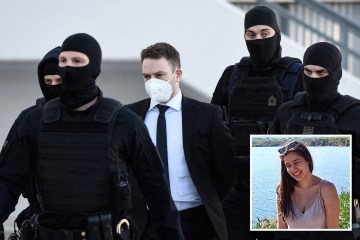 Standing in the dock for the first time, as the hearing officially got underway in Athens, the 34-year-old insisted that everything happened “in the heat of the moment” and claimed he “still loves his wife.”

Asked if he accepted the charges he now faces, which include premeditated murder, he told the three-member court: “I never meant to hurt my wife. I loved her and I still do.

“This has not changed and never will, since the day I met her.”

When the presiding judge put it to him that the murder happened in “the heat of the moment” as he has claimed, he shot back: “That is what I am saying, it was never premeditated, I had no benefit or profit from this act.”

The helicopter pilot has spent months preparing for the court hearing signalling that he will pin the blame on Crouch’s “narcissistic aggressive behaviour.”

As news of his line of defence reached the small crowd gathered outside the mixed jury court, a young woman describing herself as a “Caroline supporter,” blurted: “you see, a top-class actor, just as the police said he was.”

A total of fourteen prosecution witnesses are lined up to take the stand.

The first, policeman Kleanthis Antonopoulos told the court that investigators who entered the house on May 11, thought from the start that the pilot’s behaviour was “strange”.

”What made the biggest impression on investigators was Anagnostopoulos’ “coolness and lack of understanding of the situation.”

“It struck us [as odd] when he said that he had called [the police] using his nose when he was tied up with his hands in front of him.”

“He didn’t cry when I told him that his wife was dead and he asked me if he could hold the child.”

Antonopoulos added that the UK-trained pilot then shook the child “as if she were a doll” and said he had “never seen such a reaction.”

When a second policeman was called to take the stand, he also described the defendant as being “unbelievably” calm.

Police were also struck when Anagnostopoulos showed almost no emotion when he saw the couple’s pet dog Roxy hanging from the bannister.

The trial was due to start on Friday but proceedings were temporarily suspended until today.

Last week Anagnostopoulos was taken into Athens’ mixed jury court building where there was a heavy police presence due to the crowds assembled outside.

One cop told The Sun Online: “We had hoped to sneak him early but didn’t realise the media would be here then.”

As Anagnostopoulos gave his details to the court, he declared that he was “married and a widow”.

According to witnesses, he did not flinch and looked the public prosecutor “straight in the eye, cooly, without any expression” as his charges of premeditated murder, filing a false police report and killing the family’s dog were read aloud.

After reportedly confessing to cops, the dad later said he regretted his actions and will try to prove that the killing was not premeditated in a bid to dodge a life sentence.

He told cops at the time: “I did not want to go to prison, because I wanted to raise my daughter,” the 33-year-old was said to have told detectives.

Speaking to Sun Online ahead of the trial, the Crouch family lawyer, Thanassis Haramanis, said: “The self-confessed perpetrator of this crime has already proved that he will do anything to reduce his sentence.

“That is his goal, and we will see it being played out in court. But we are confident and optimistic, that justice will be served. He will not be able to hide.”

Caroline was a Brit who grew up in Greece and started dating Anagnostopoulos when she was a teen, eventually marrying him.

Last May, Caroline was allegedly strangled in front of her 11-month-old daughter at her house in an upmarket Athens suburb.

Police found Caroline’s lifeless body next to her crying daughter – who had not been harmed – later that morning.

A police spokesman said he found Anagnostopoulos handcuffed to the floor near Caroline and had duct tape over his eyes and mouth.

The family’s pet husky was also strangled with its own lead and left on a fence.

Anagnostopoulos told police how he “begged” intruders who he claimed broke into the house not to harm his family.

He is then alleged to have staged an elaborate botched robbery, placing baby Lydia next to her dead mother’s body, drowning the dog before hanging its body from the stairs and trashing the home.