‘I’m ok, just give me a new bike’: Mattias Skjelmose gets back in the saddle to finish inside top 10 during stage 2 of the Volta a Catalunya after CRASHING into a ravine and falling 15 meters!

Mattias Skjelmose secured a top 10 finish during stage 2 of the Volta a Catalunya despite crashing with 58km left to go.

Skjelmose crashed into the ravine and fell into the woodland after rider in front of him made a ‘mistake’ on a downhill curve.

Skjelmose – who was thrown over the brick wall – survived the incident and was seen holding his bike over his head as he returned to the course.

Skjelmose had 58km of the 203km race left to go when the crash took place. He said one of the riders in front of him ‘made a braking mistake’ that caused him veer off track.

Given he was situated on the outside of the peloton, Skjelmose crashed into the wall that was functioning as a road barrier.

According to his team, Skjelmose fell 10 to 15 meters before climbing back up to the road side.

The 21-year-old, who was fortunate to walk away unharmed, was was heard saying ‘I’m okay, I’m okay. Just give me a new bike’ as he returned to the course. 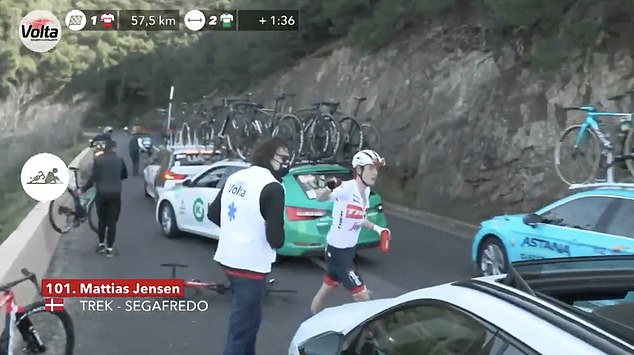 He was heard saying ‘I’m okay, I’m okay. Just give me a new bike’ as he returned to the course

Speaking about the incident after the race, Skjelmose said: ‘Me and Antwan (Tolhoek) were in a pretty good position just behind UAE on the downhill.

‘Then somebody made a braking mistake and unfortunately, I was on the outside, and on my outside there was a cliff where I ended.

‘Luckily, I did not hurt myself so bad, and I came pretty fast back on the bike and Antwan helped me back to the bunch.’

Skjelmose’s entourage handed him a new bike following the incident and his teammate Antwan Tolhoek helped him back to the peloton.

The young Danish rider – who was riding in a torn jersey following the incident –  managed to work his way back into the race and held his own as crosswinds. 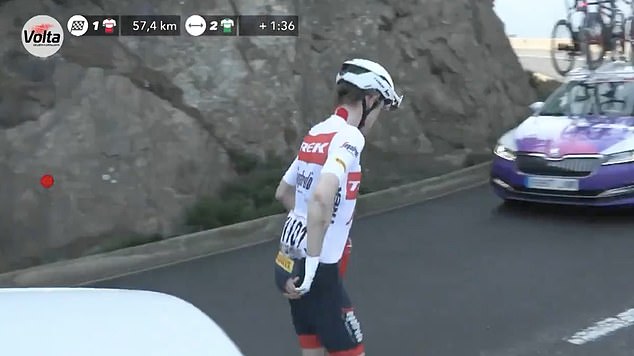 As a result, Skjelmose finished Stage 2 of Volta a Catalunya inside the top 10 and credited his ‘adrenaline’ for getting him through.

‘If there’s one good thing about a crash, it’s that you’re flooded with adrenaline and that’s probably the best pain reliever you can have. I didn’t really feel anything,’ he said.

‘I think I had a guardian angel with me today because I feel fine. In the end I had the same legs as the rest of the day, so that was good. I was very lucky, for sure.’