THE mum of a Brit sailor believed to be captain of Vladimir Putin’s superyacht said she’d be “pretty furious” if she son was working for the Russian dictator.

Former merchant seaman Guy Bennett-Pearce, 43, declined to comment from his home in Italy last night telling The Sun: “I can’t say anything because of legal confidentiality.”

But his mother Debbie, 64, slammed the Russian tyrant, saying the thought of her son working for him: “Might make me a little bit furious”.

Speaking from home near Taunton in Somerset she said: “I’m sure Guy wouldn’t work for someone like that. I’m his mother, I hope he would have told me if he was.

“I don’t think for one second Guy would work for that murderer. He’s never mentioned any of his clients, it’s all just speculation.”

It comes as The Sun revealed the sickening luxury Putin enjoys on board his £500m superyacht which includes a tasteless gold loo roll holders. 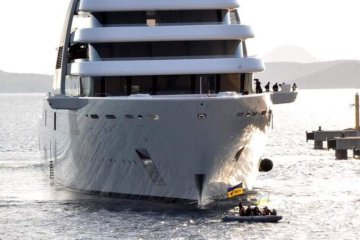 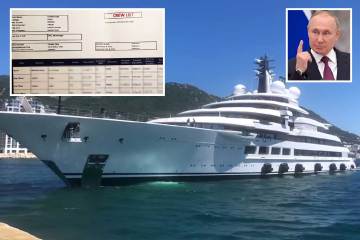 Mad Vlad, whose forces are bombing women and children in Ukraine, spared no expense on the six-deck Scheherazade.

Pressure is mounting on Italy, where the yacht is anchored, to seize and sell it to benefit Ukrainians.

An ex-crew member said: “Russian people paid for it. Putin needs his head flushing down that golden throne.”

The Scheherazade’s official cost when finished two years ago was $700million — but insiders say it could be closer to $1billion.

Pictures obtained by The Sun show six decks of luxury, and a worker who helped build it said: “Everything onboard is the best in the world.

“Every surface is marble or gold. There are countless swimming pools, a spa, a sauna, a theatre, ballrooms, a gym, two helipads. It’s like a mini city.

“There is even a hospital which makes sense when you hear rumours of Putin being terminally ill.

“It is hard to swallow the fact that the most incredible ship in the world is owned by a man intent on bombing civilians in Ukraine.

“And it is an unimaginable amount of wealth when the average Russian’s salary is £5,000 a year, and people there are struggling to eat.”

Since September 2020 the 459ft-long floating palace, named after a legendary Persian queen, has been moored in Marina di Carrara in Italy.

Rumours that Putin owned the yacht have circulated since its construction.

But its ownership was not investigated until jailed Putin critic Alexei Navalny’s team released a video on Monday detailing the crew — all said to be Russian security.

Italian authorities have now been urged to seize the yacht. It is said to have a separate European crew only allowed onboard when Putin is away.

Personal notes to the despot are evident in a judo gym which has framed pictures of black belts.

A tiled dancefloor lowers down to turn into a pool. The floor is thought to be one of two worldwide — with the other on Putin’s other yacht Graceful.

Other indulgences include a self-levelling pool table, five-metre aquarium and the biggest TV built on a yacht, which cost a million euros to install.

Bathrooms are adorned with gold toilet roll holders and taps.

The former crew member added: “All over the world yachts owned by oligarchs are being seized but the Schehezade is sitting there in plain sight in a marina in Italy.

They believe they were visiting the port to watch the ship.

Tory MP Tom Tugendhat told The Sun: “Putin’s pampered nautical palace was launched with cash stolen off the Russian people and now floats off the Italian Riviera showing us all the action we should take.”